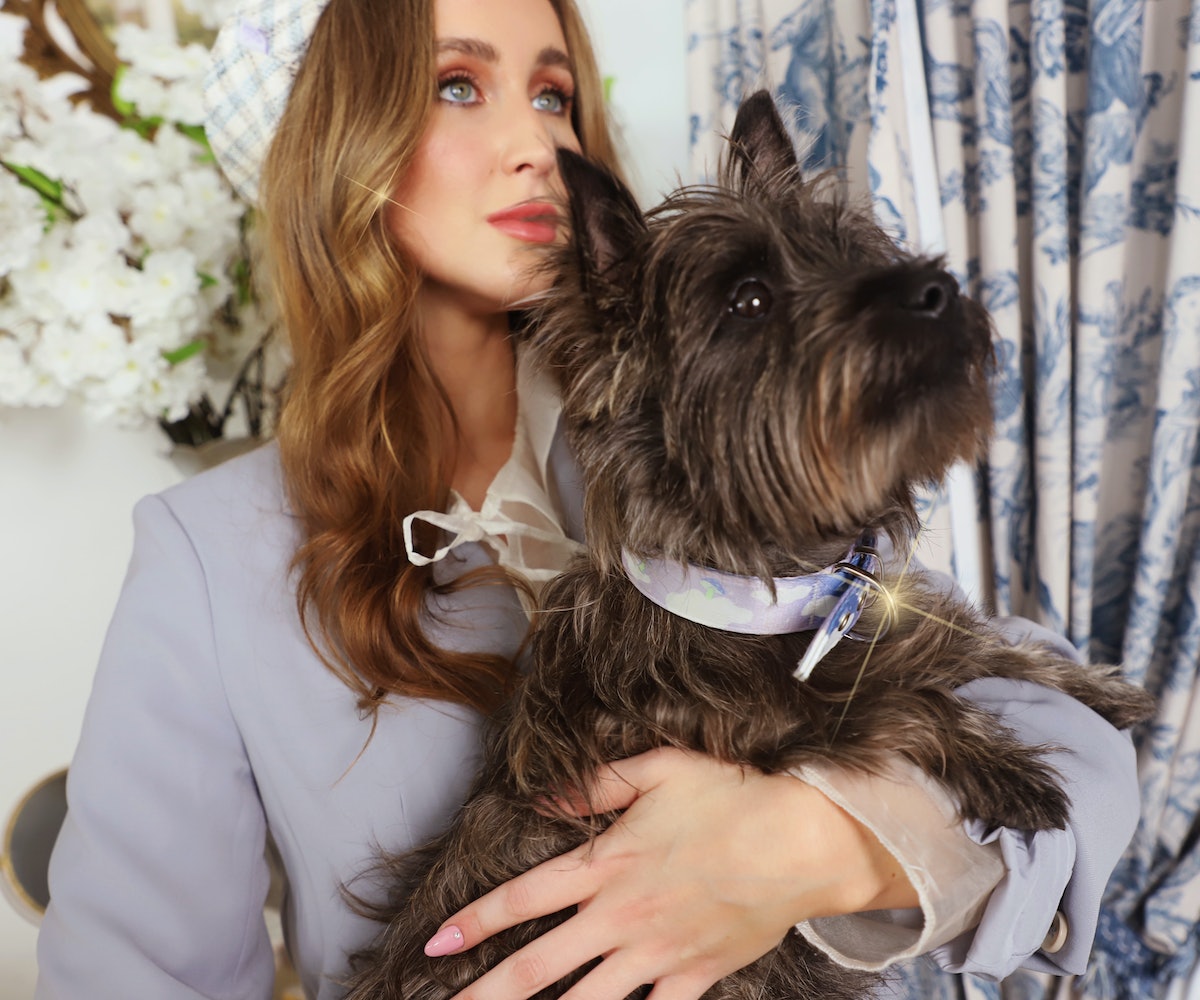 You may recognize Shelby Eastman as the creator behind the quarantine baking trend #shelbcake or as one of the fashion girls you follow on Instagram. Despite her elusive aura, she totes a hefty resume of titles, from creative director, consultant, and hospitality expert, to now, puppy couture designer.

Named in memoriam of her family dog, Daisy just launched its first collection of too-cool dog collars on July 15. Eastman’s newest gig came out of necessity when she couldn’t find any captivating dog accessories for her new four-legged friend, Ruby (also a Cairn terrier, just like Daisy). Since its conception, Daisy, the brand, has been a tender-hearted venture entwined with familial sentiment — each collar is named after a canine in Eastman’s life.

After the pandemic caused Eastman to temporarily move into her family home in Houston, Texas, she used the time to bond with her childhood dog, Daisy — enough to bring the 12-year-old pup along on Eastman’s move from New York City to Los Angeles. Before she was suddenly diagnosed with cancer upon an unexpected vet visit, Daisy spent the last couple of years of her life exploring her new home’s local sights, like Malibu and Laguna Beach. A couple of months after Daisy’s passing in December 2020, Eastman found Ruby. On the hunt for something stylish, the entrepreneur scoured pet stores but couldn’t find any collars that suited Eastman’s fashion-forward aesthetic, and thus, Daisy the brand was born.

The launch has been a meticulous passion project for Eastman and in Daisy’s memory, the pet accessories brand will donate five-percent of all proceeds to The Love Leo Foundation, a Los Angeles-based shelter close to the founder’s heart. Produced thoughtfully and designed in-house, Daisy’s funky and edgy collars are priced between $50 and $55 and boast chew-proof materials that are made to last your doggo’s lifetime and beyond.

Ahead, Shelby Eastman spoke with NYLON about the debut launch of her new brand, her plans to build a doggy kingdom, and where you can find your pupper some personality with a statement collar that guarantees to turn heads at the dog park.

What made you want to create Daisy?

When I got Ruby I went to Petco and shopped around online but I essentially just couldn’t find anything that represented me and my personal style. I think pets these days, especially for the younger generations, are kind of our kids. Younger generations are having babies later in life and getting dogs instead, that’s just statistics. It’s more recognition of seeing these special pets as true companions and for some who might not have babies, these are their babies. There’s a plethora of [options] for human kids but I don’t like anything when I shop for [my dog], so Daisy fills that void.

We’ve seen kids’ clothes really evolve but I personally felt that dog accessories or fashion got stuck in 2006 and never moved forward. Everything I found was blingy or tribal print or sports logos, like not in a good or cool Y2K way, like they made it in 2001 and haven’t touched it since. And with the direct-to-consumer brands, I did find they felt too minimal for me. I started thinking, there’s a ton of really cool people that have dogs and nothing that reflects them. I wanted to create something that fills that void for the cool-kid pet owner. So I thought, I’m gonna do it myself and see what happens.

If you had to choose three words to describe Daisy the brand, what would they be?

Bold, playful, and luxurious. When some designer brands came out with their own pet lines while I was in the process of making Daisy, I was like ‘oh shoot’, but our price point is super accessible. Not everyone can afford Miu Miu but there are other brands, and I’m not talking fast fashion that knocks it off, but other more accessible brands that bridge that gap. So that’s really where we’re trying to land.

What was your inspiration behind the first collection?

We tapped into human trends and went a little more maximalist with it. We wanted everything to look very editorial and got creative, a little weird, and funky. We looked at prints and runway shows to define a color palette. I put together slides, moodboards, Pantones, and wrote out exactly what I wanted everything to look like. I had an inspo image for the Ginger collar of this photo of Lizzie McGuire from a 2005 teen magazine wearing pink and red standing on a lollipop. So I made a deck to start because I named all of the collars after current or past dogs in my life. The process for every design was thinking about what does the dog mean to me and how can I pair this with what’s happening right now in current fashion? For example, my brother’s dog Molly loves the zoomies [so] she inspired the retro wavy print.

What was the creative process like behind first launching Daisy?

I have a business degree with a focus on fashion; I don’t have the skills to make a tech pack or know how to use CAD or Photoshop to make patterns. So I floated the idea across some people who connected me with a friend of a friend who got an application from a student at SCAD for an internship at their swimwear brand but they weren’t taking interns at that time. Her name is Alexis Barnett and her portfolio was really impressive. It was perfect because I’d love to support someone who was still in school and we’ll be in it together — nobody’s judging anybody here. We’re learning how to do this together.

So I reached out and we live-designed together virtually, it was so collaborative. She was just game with trial and error. It was really special because we were both learning and she’s really, really talented. I told her that once she blows up she better not get too big for Daisy. I would say I creative-directed the collection but she really created every single print from scratch and made everything in-house.

What about the collars with fur lining? They’re so unique.

It’s faux fur, of course, and made out of small-dyed batch polyester. That idea was definitely just in my head because a lot of my jackets have fur on the inside. When my grandma passed she left me the most amazing blue leather coat with fur trim at the bottom. It just really came from my personal style and I thought it would be pleasant for the dogs. The fur is very thin and light; it’s not warm. My Ruby wears it in 100-degree Houston weather and I never feel like she’s too hot.

Why did you make the decision to donate a portion of Daisy’s proceeds?

The reason I chose them, is not only do they do incredible work fostering, rehabilitating, and finding homes for adoptions but [because of a personal connection]. When Daisy got sick, it happened really quick. I went to the veterinarian and they said she had 24 hours at best and it was crazy because we had just gone for a walk yesterday. They gave me the name of a woman that came to my house and it was done in the most peaceful way it could be done. I was holding Daisy the whole time, we let her eat peanut butter up until the last second in my bed, and they took her away in a wrapped blanket. After that, [the doctor] sent me the ashes and a stamp of Daisy’s paw and wrote me a really nice letter saying she was so moved by mine and Daisy’s connection that she made a very generous donation to Love Leo in Daisy’s name. So this donation of the five-percent is to carry that on. Her legend lives on, baby!

Do you have any future plans for Daisy?

It obviously rides on the success of this first batch. It’s been 100-percent self-funded, which I’m proud of. The factory is already working on harnesses and leashes that will match these patterns. We’re working on some really cool designs for those. I want to do another collection soon inspired by Texas, not literally, like cowboy hats or boots, but more to tell my journey about living here. I don’t want to give too much away.

For what it’s worth, a doggie cowboy hat would be really cute.

No, totally! I think we can play with that theme. I’d love to get into sweaters and beds, too, because the patterns and prints are so cool and something I would totally wear, which is the entire point. I would love to incorporate something for the human, not something super matchy-matchy that it’s cheesy, but something that if you liked the print so much you can incorporate it yourself. All of that is definitely to come.

NEXT UP
Fashion
How The Exposed Thong Is More Than Just A Y2K Fashion Comeback Today
Fashion
6 Tips On Shopping For Vintage Swimwear, According To Experts
Fashion
Kim Kardashian Collaborates With Beats On SKIMS-Inspired Headphones
Fashion
Vans’ Next Designer Collaboration Is All About Vacation Style