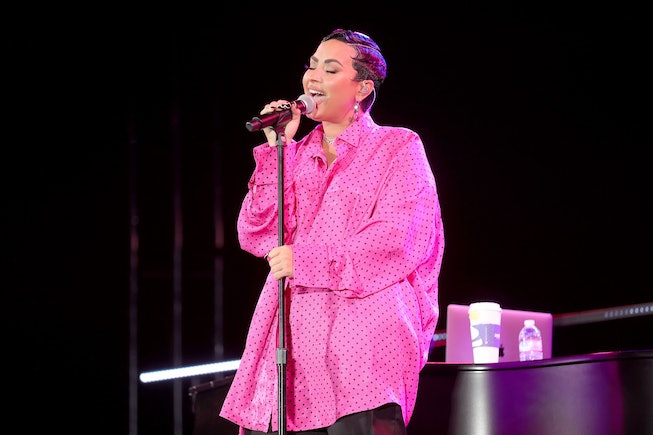 Demi Lovato pulled out all the stops for the drive-in premiere of her YouTube docuseries Demi Lovato: Dancing With The Devil on Monday night. The singer wore two different looks for the event at The Beverly Hilton: a white tuxedo dress by Martin Martin followed by a pink Balenciaga blouse and black Givenchy trousers.

“I performed ‘Anyone’ and ‘Dancing with the Devil’ and felt really at home being back on stage,” Lovato told Vogue. “Performing ‘Dancing’ was special for me because it was the first time doing that song in front of a live audience, and it signifies so much for me in this journey.”

The new series goes over Lovato’s 2018 overdose and the following years of her recovery. The overdose resulted in organ failure, three strokes, and a heart attack that has left Lovato with permanent disabilities, including blind spots in her vision.

Lovato’s stylist, Siena Montesano, posted her two looks from the premiere night to congratulate her client on the successful event.

“Congrats on an evening filled [with] so much love and gratitude!” Montesano wrote on Instagram. “I love you, thank you for letting me be a part of your journey!!”

Check out Lovato’s two looks from the Dancing With The Devil premiere, below.