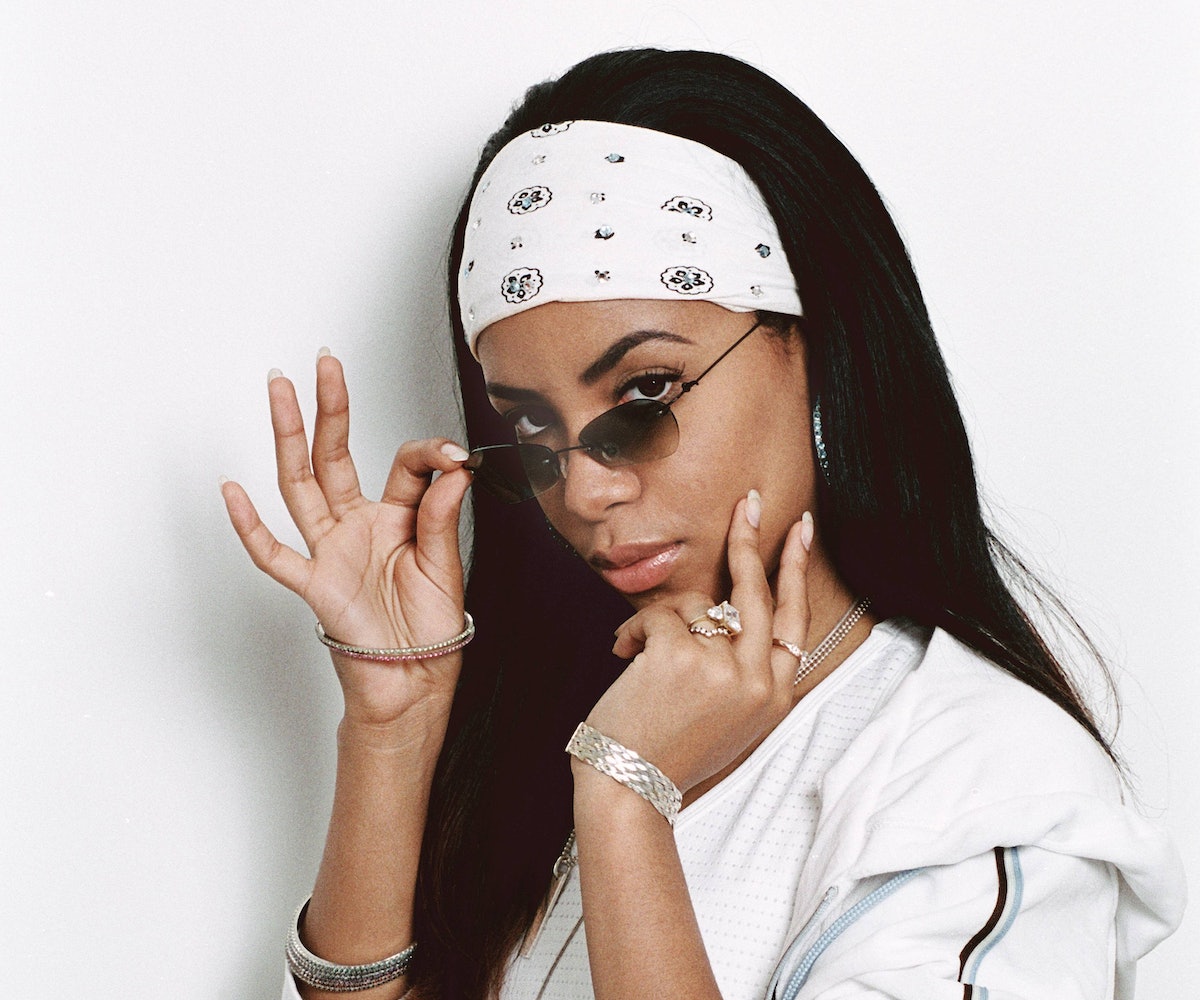 Nearly two decades since her tragic death in 2001, Aaliyah has become a style icon for her best '90s and early '00s fashion moments. So much so that her nostalgic performances, music videos, and red carpet appearances still serve as a major inspiration for Y2K fashion, which has been steadily making its way back into our wardrobes — from little-top-big-pants silhouettes to blinged-out embellishments.

Her signature aesthetic wouldn't have been possible without the help of her stylist Derek Lee, who met Aaliyah while he was working for a magazine and got his first gig styling her for the music video "One in a Million" in 1996.

"I come from the Lower East Side in Manhattan," Lee tells NYLON. "The kind of girls that I saw walking around was how I'd dress her. Back in those times, the cutest girls were the ones that didn't have to flaunt it. They could dress in jeans and a T-shirt or a tank top and be hot, just from their vibe. We clicked because that's who she was, too."

Today, Lee sees Aaliyah's fashion influence all of the time. "It's 100 percent mainstream," he says. "The baggy pants, all this oversized stuff that's been out for a while, that was her all the way. I see it all over in fashion, and I see it in other artists, as well."

Ahead, we looked back on some of Aaliyah's most fashionable music videos and Lee's creative process behind each one, which includes style inspiration from dancehall, off-the-runway designer pieces, and a Dapper Dan original.

"The sterling silver eye patch [that Aaliyah wore] was something that she had in the works already. That came from her. I bought the bra at a sex shop on Christopher Street in New York because it was one of the only places that was open until midnight back then. I had just flown in that afternoon to flip back around [to Los Angeles] the next morning to be on set for the video. I went mostly shopping in the sex shops; that's why you see a lot of leather and stuff like that in there, because that was really my only option, along with the clothes that I already had, like the flight suit. And she loved it and she rocked it."

"I loved that joint. That video was one of my favorites, actually. The red camo cargo pants were custom-made by 5001 Flavors. Her look was really supposed to be about the pants and her swag, so the top needed to be very, very simple. She has Jamaican blood and I've always been a fan of dancehall music, so you see her rocking two different colored Clark Wallabees, because Wallabees were huge in dancehall. I always wanted to pull that into it."

"Her red bathing suit top was from Gucci, which I don't think was really meant to go in the water, either, but it was beautiful. It was custom and all hand-done with blood-red Swarovski crystals. Her final look for the big dance scene with the high-slit skirt was a push for her style. I had it custom-done for her, too. It kind of bit off of the Gucci design and added some other stuff to it. [Choreographer] Fatima was like, 'You have to do that. You have to do the heels, you have to do this. It's time. It would be hot at the end, for you to flip [your outfit] because no one's ever seen you do this.'"

"I knew ‘Try Again’ was going to be a dance video, and she was going to wear one outfit for the entire thing. So it had to be really strong, and really her. I had a relationship with Dolce & Gabbana and I'd seen an ad for the top, actually, in Vogue for something that was coming out for pre-order. I was like, 'Oh, that's it.' Because if we needed to level up on her little bra tops with the baggy pants, maybe we should go this route. Dolce & Gabbana had a bunch of colors and I opted for the plain crystal because they had the matching belt and a matching choker. That was all 100 percent Dolce. I had my tailor knock off a pair, just in case they ripped."

"The black gown was Roberto Cavalli and she actually wore it backwards. It was covering too much of the front, but it had a lot of skin out in the back, so we flipped it. Usually I would get an OK from Cavalli to do it, but we didn't have time, so I just kind of did it anyway. They liked it, thank God. The snakeskin outfit was from a designer on Rodeo Drive and that wasn't worn right [either]. The bottom looked like a skirt but it was actually supposed to be a dress. So we used it as a skirt and then I custom-made a snakeskin top to go with it."

"Dapper Dan made the Chanel jumpsuit. Aaliyah looked so good in a catsuit and we wanted it to be designer. He took the idea and he ran with it. It's pretty amazing. The dancers' faux Chanel buckle belts are from Canal Street where they would sell really random knockoff things. Their shoes were regular sneakers that I made into Chanel sneakers to go with it."

"The good thing with my relationship with her is that she trusted me a lot, so I didn't necessarily have to have fittings with her beforehand. I just had to show up with what I thought would be good, and she would decide from there. I was very surprised she wore the tie-dye skirt with that orange crop top, which I bought at Patricia Field’s shop in the East Village. The skirt was just some fabric that I bought on Fifth Avenue and just tied, and luckily, it worked out. My favorite outfit from that video, though, is the red outfit because that's 100 percent dancehall right there. In Jamaica, people were using what they had around them to make things, so we took a Coca-Cola can, we cut it up, made the band around the top and around the Kangol hat. We even made some earrings that were little Coke bottles."