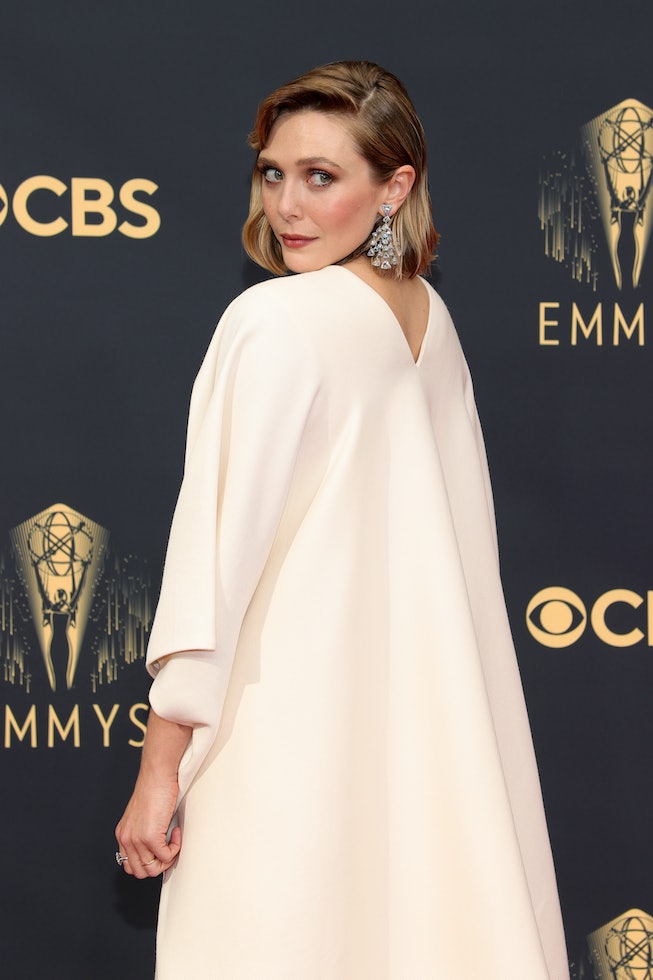 Elizabeth Olsen arrived on the 2021 Emmys red carpet wearing a look designed by her very own sisters, Mary-Kate and Ashley, and their luxury brand The Row, along with statement earrings from Chopard. Olsen, who is styled by Elizabeth Stewart, is nominated for her first-ever Emmy Award, Lead Actress in a Limited/Anthology/Movie, for her starring role in WandaVision — one of 23 (!) nominations for the Disney+ original series.

Olsen seems to be The Row’s biggest fan — after all, her older siblings did name a fashion line (Elizabeth & James) after her. “I do think that they have such a strong point of view,” Olsen told Elle.com in an interview from 2018. “And they make such beautiful tailored clothes and timeless pieces, and I just feel lucky that I get to borrow it all the time.”

Olsen has been spotted in The Row a number of times since its launch in 2006, especially during promotional tours for her movies. Back in 2016, Olsen wore a white suit from the brand to the 2016 Independent Spirit Awards, and gray plaid coat and black trousers from the brand while promoting The Avengers: Age of Ultron in 2015. At the 2011 Cannes Film Festival for the Martha Marcy May Marlene photocall, she wore a runway look from The Row’s Fall 2011 collection, as well.

See Elizabeth Olsen wearing The Row at the 2021 Emmys, below.

NEXT UP
Culture
The Cutest Couples At The 2023 Grammys
Fashion
Olivia Rodrigo Wore A Sheer Slip Dress To The 2023 Grammys
fashion
All Of The Sexy, Sparkly Outfits From The 2023 Grammys Afterparty
Beauty
Charli D’Amelio and Landon Barker Wore His & Hers Goth Manis To The Grammys
Style + Culture, delivered straight to your inbox.

This article was originally published on Sep. 19, 2021