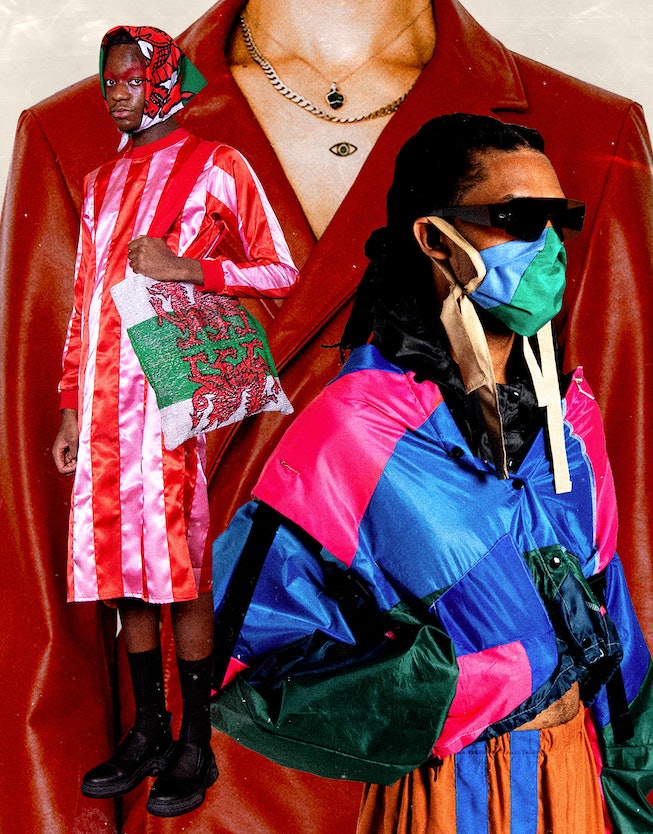 It all started as a bit of fun for Russian photographer Maya Golyshkina. As lockdown began, the young artist realized she still had lots of energy and wanted to create something. “I have me, myself, and I'm in my room,” she thought at the time. What came next was a series of Instagram images of her dressed in kitchen cutlery, CDs, balloons, empty snack wrappers, and paper sculptures, among other things. “It expresses my character, ideas, moods, humor, energy, and fashion,” she explains.

It caught the eye of Marc Jacobs, for whom Golyshkina created a series of collaborative images last summer: her, styled with three of the designer’s bags, dressed in a pack of cards, toilet-roll roses, and a hat-and-top combination made from corn puffs.

She’s not the only one for whom household objects have recently found renewed charm, intrigue, or appeal. Just as the Dada movement set out to upend existing moral, social, and aesthetic codes during the early 20th century, there’s a new crop of designers for whom a very similar idea is being explored through upcycling wardrobes. But where traits, including ugliness and irrationality, were then typically associated with the art movement, these results, 100 years later, are anything but: It’s wearable fashion (with a dash of Margiela), just made with what at first might seem like some surprising stuff.

“I was always getting frustrated by going to fabric shops and everyone’s getting the same kind of thing,” says the designer Adam Jones. “I felt if you buy a nice fabric then it’s obviously going to turn out pretty nice if you put the money in. [That] didn’t really excite me.” So, he looked elsewhere — for discarded items or things that had been forgotten. His 4-year-old label has since carved out a niche for its use of pub paraphernalia — towels, mats, and tapestries — and each piece is entirely dictated by the original find, be it size or fabric (one tea towel can’t make a coat, let alone many coats, for example). And for him that’s exciting. “I don’t know what I’m going to make from it and I don’t know when I’m going to make another one,” he says, hinting about the future use of London Transport moquettes.

That same magpie approach similarly serves Miles George Daniel. The emerging designer, who will make his London Fashion Week debut this season, tasked himself with making a zero-waste collection for his graduate collection last year. Having already been focused on sustainability, he decided to ask himself: “How can I take it to the next step?” And explains: “Realizing that I can use any fabric, I can unpick thread from a T-shirt or any garment and then re-use that for my next project.” When lockdown hit, he was working in his bedroom rather than a studio and it made sense to go about fully exploring the answer to his initial question. “It made everything so much stronger,” he says. “I started using cardboard scraps and wires, and going through my whole wardrobe, the garments I don’t wear anymore, and repurposing them. It was very liberating.” The result is impactful: sculpturesque, layered, and notably appealing. A look can be based entirely around one object he’s found.

It’s more about creating rather than designing, which is the crux of this new genre. Making from what there is rather than what you might want or choose.

New York-based Adiff was the result of solving a sourcing dilemma. Almost 12 umbrellas were used in the collective’s Jacket System design, and founders Angela Luna and Loulwa Al Saad have spent a lot of time experimenting with plastic shower curtains, which have subsequently become a transparent pocket sling to hold your iPhone. Recently, they released the Open Source Fashion Cookbook with DIY recipes to create your own clothes from existing materials. Contributions come from fellow brands, like Raeburn and Chromat, feature suggestions using bedsheets and blankets as well as other likely landfill-destined items.

“We also wanted to leverage pieces people would already have but couldn’t find a logistical solution for us to produce those materials,” explains Luna. “So then we thought why not just have people use their own materials and bring the production to them?” Self-confessedly, she can’t take a trip to Ikea anymore without looking at it as “material research.”

“Lockdown, and the general state of the world, has made many designers look at the way we create and make changes in our practice accordingly,” ponders Amy Goacher, a knitwear designer about to launch her label. Spending time at home without access to fabric and vintage shops made her think more laterally about how she could create, the seed for which had been sown while studying at Kingston University, in the UK, when its workshops, including use of knitting machines, were closed. “I decided that I would turn to what was already made and see how I could develop the pieces further.” She now sources secondhand knits and enjoys transforming something unwanted into something desirable. Sometimes they’ll be a mash-up of two knits together; other times they’ll be elevated by embroidery, which is repurposed knit remains.

Meanwhile, Chopova Lowena, the brand from Central Saint Martins alums Emma Chopova and Laura Lowena, draws on traditional English and Bulgarian fabrics such as tablecloths and napkins to create its vibrant folkloric ensembles. And the Danish designer Peter Jensen recently launched Yours Truly, a new brand in which you’ll find tea-towel smock dresses (whose origins actually lie in a request from Tim Walker for a shoot way back when) and a host of other upcoming material innovations.

“When I moved to America,” explains Jensen, who is also chair of fashion at Savannah College of Art and Design, “I had all these ceramics and plates that were shipped over and when they arrived they were all smashed.” He’s now looking into grinding them down to make a textile. “I’m really trying to use all the things that I see and have,” he says. Which next includes some costume jewelry from the '40s, '50s, and '60s, and some wigs he’s been collecting. “It’s so nice,” he says of the approach. “It’s much slower.” It's also a far cry from the pace of running his eponymous contemporary line for 15 years.

“I think the whole thing with designing in lockdown and having a practice in a pandemic is that you’re having to find solutions and find really beautiful things that you may have never even thought about using before,” says Aaron Esh, who's currently studying in a masters program at Central Saint Martins. It was his London College of Fashion bachelors that garnered him notable attention: among the pieces, a wonderfully louche jacket fastened with a pin recycled from his mother’s body of work when she studied at the Royal College of Art, along with a knit smothered with actual iPhone wires. Even more pertinent was the presentation of the collection: a mock setup of his bedroom, Tracey Emin style, which couldn’t help but be a more apt depiction of how we’re living our lives right now.

Like Goyshkina says: “My works are like a mirror of everything that’s happening now: isolation, technology, recycling, and rapidity.”