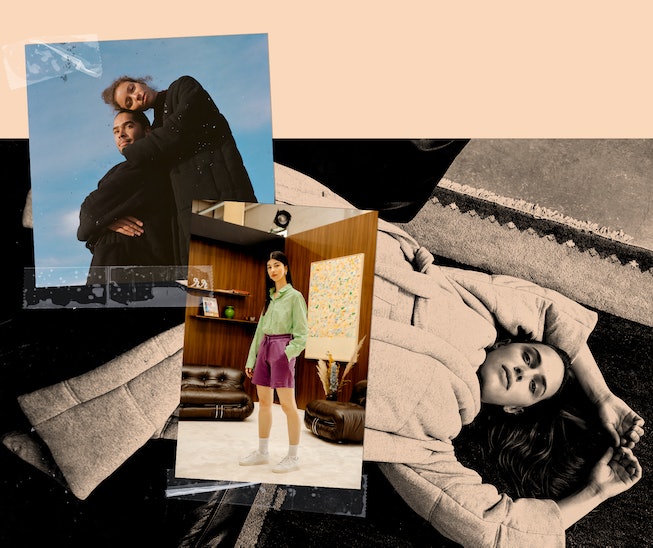 Little did Dutch design duo Viktor & Rolf know back in 2005 just how spot-on they'd be in predicting the future with their sleep-themed fall collection, full of hair strewn upon pillows and silhouettes swamped in duvets, models doubling as ornate walking beds. What might then have seemed like your typical absurd fashion spectacular, however, has 15 years later become quite a more reasonable proposition for real life: dressing up for doing nothing.

It's what Rebecca Zhou, founder of the New York-based brand Off Hours, has dubbed "inactive-wear" — a term that, when searched online, results in Google asking if you're sure it's not actually being really active you want instead. Even though, as a generation, it turns out, really, it's not.

According to a recent youth market research report published by the futures consultancy The Future Laboratory, JOMO or "joy of missing out" has never been more appealing to Gen Z. Owing to the rise of convenience culture via Netflix, food delivery, same-day shipping, and flexible office hours, they are "leading the homebody renaissance." For "Generation Homebody," bedrooms have become safe havens from the hustle of daily life with self-care and cosseting high on the priority list. Apparently, FOMO is becoming a thing of the millennial past.

As such, "sloungewear" — a hybrid of sleep and loungewear — is on the rise and comes in accordance with the latest iteration of a recurring lifestyle trend for the laissez-faire. First, it was the cozy Danish concept hygge; then the Swedish lagom, meaning everything in moderation; and now the Dutch term niksen, for "doing nothing," a fine art form that Ottessa Moshfegh explored in her 2018 bestseller My Year of Rest and Relaxation.

"I guess it's [niksen] in our roots and culture to have that coffee break during the day and actually do 'nothing' really productive," says the Dutch designer Daniëlle Cathari, known for her relaxed line of comfortable clothes. "A moment to just do that and nothing else." Though, personally, it's something she confesses she never really does.

"In our demanding modern lives of always being available, busy, and 'on,' it's very rare that we slow down, let alone stop," observes wellness coach and writer Lily Silverton as reasoning behind this burgeoning culture.

Lately, though, stopping in one way or another is something we've all been forced to do; lockdowns mean rethinking time, space, and wardrobes. As a result, a new breed of fashion brands has risen, blending self-care with downtime dressing as the homebody economy gets a little closer to home for all of us.

"I had this same sleep shirt for a really long time, and it was getting a little gross to be honest," recalls Zhou of Off Hours' beginnings. "I went to look for something new and noticed this really big dichotomy of things that were really comfortable or something like Victoria's Secret, or very boring or, on the other side, a really beautiful silhouette." But in between, she found nothing that was both comfortable and designed or considered enough like her regular clothes.

Her answer came by way of a now-signature homecoat (Off Hours does just one product), a quilted robe meets comforter. "[It's] that feeling of when you wake up and don't want to get out of bed. How do you conserve that feeling and make it into a garment?" she describes.

It was the same for Ashley Merrill, founder of the California-based brand Lunya, which launched in 2014. One day she clocked herself in the mirror wearing her husband's old fraternity T-shirt and boxer shorts. "What's that situation?!" she recalls. And so she set about finding decent sleepwear. "Everything out there was very sexy or very matronly, and I didn't really see myself as either of these." Instead, she wanted something that would service this time of day — the hours of which we've now seen evolve to include the working week — and came up with collections comprising silk sets, robes, and jumpsuits. "I don't want to dress up and be uncomfortable, but I still want to be attractive and look somewhat like I have my life together without looking like I'm trading comfort," she says.

For Gwen Nguyen, it was about "the idea you can roll out of bed on the weekend and have a cup of coffee and read a book in the living room and not be in your underwear and T-shirt." She launched her very appropriately named No Plans label in 2019 as a pastel-pretty capsule collection of post-9-to-5-wear: track pants, blouses, shorts, and camis.

"I think inactive-wear is really important because during the past few years, activewear has been such a big part of a larger conversation around wellness and obviously being active is super important, but there is this whole other side of self-care that can sometimes feel ignored," points out Zhou. "You can feel like I'm so lazy and unproductive for wanting to stay at home. Something we realized: I'm wearing my worst clothes, this weird dichotomy of seeing loved ones and being with yourself but wearing stained rags! The time we spend at home is a rich time."

As Silverton points out: "The 'doing nothing' stage is often when the important stuff happens — when we actually absorb life and as a consequence naturally become most aligned with our awareness, our values, and creativity."

Comfort, therefore, is key. But sweats just don't cut it and a gym kit feels wrong. Attention to the right fabrication is at the core of these brands' selling point — think alpaca, natural silk, premium cottons, or French terry over sporty performance stretch styles, which, as a result, make you feel good both physically and mentally; quite a different combination compared with the athleisure category that came before it.

"With athleisure, the inference was that you were off-duty [from] exercise and I think I quite like the shift towards unapologetic: unapologetic comfort," recognizes Lucie Greene, founder of the futurist practice Light Years. "It's morphed into comfort as self-care; self-improvement has migrated to self-care. Even if it's indulgent, it's good for you, which is different to the tone of you must constantly be improving, which has an anxious layer to it."

"The time we spend at home is a rich time."

"There does seem to have been a paradigm shift about this idea of comfort and why must we be uncomfortable to be presentable?" she points out of what feels like something of a sartorial epiphany that has occurred during the pandemic, especially among an older generation of corporate women dressing for the dining room. But will it last beyond lockdown?

"Fashion that was once pioneered by bedroom-bound Generation Z is filtering into mainstream society as an acceptable, and even desirable, aspect of our identity," predicts Holly Friend, the senior foresight writer at The Future Laboratory.

Hence, the borrowing of a high-fashion shape for Off Hours' cocoon homecoat, and the sophisticated yet slinky (and Zoom-appropriate) style of No Plans' bestselling blouses. Meanwhile, online retailers are noticing an increase in sales of comfy pieces, such as leggings, loungewear, and looser pants for around the house, but moreover, shopping sites like MATCHESFASHION have noted a pivot towards the inclusion of day dresses and working-from-home tops within this. Looks like it's time to stay in — without sacrificing style, of course.