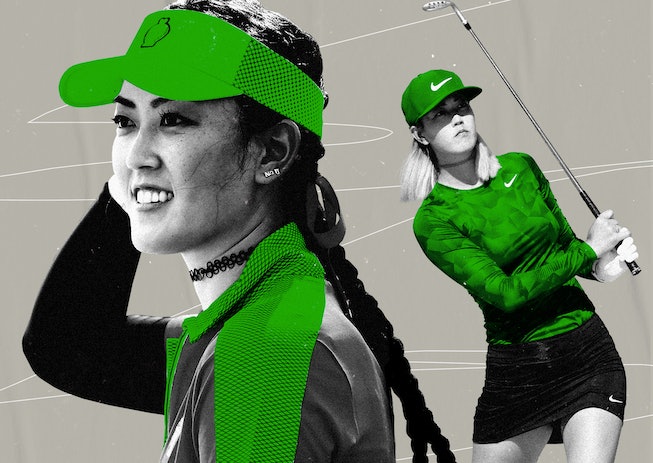 Golf’s public image has long been tied to the stereotype of old, rich white dudes in chinos. But if you chip away at the surface (golf pun!), you’ll see that there is so much more to the sport — and to be inspired by sartorially. Introducing “golfcore,” a term I’m crediting to downtown New York sweetheart and comedian Lauren Servideo, who texted me after watching the new Tiger Woods documentary: “Let’s supercede gorpcore and lean into golfcore: Polo, Titleist... it seems like the next, most reasonable step after Princess Diana-core.”

Indeed, upon watching Tiger, you may find yourself drooling over Woods’ Nike mock necks and Elin Nordegren’s gallery-glam looks, in which she pairs oversized Chanel shades with sporty, layered outerwear. On Depop, there are currently hundreds of posts tagged #golf — Izod crew necks, kitschy embroidered vintage polos, sporty skirts, Titlelist bucket hats. Golfcore is not quite tennis-chic, and it’s not fully Larry David at the country club. It’s about finding a muse in the individuals who’ve defined the sport, merged with the fact that the game itself is undergoing a transition for a younger generation.

My dad, a passionate golfer, sent my brother and me to a one-week sleepaway golf camp every summer from the ages of 12 to 15. It was a joint tennis/golf camp, pretty much divided down the gender line: girls played tennis, boys played golf. There I was, one of the lone females in the golf program, brace-faced and awkward in Old Navy chinos and off-brand polo shirts. While packing for camp, it was hard for my prepubescent brain to work with the dress-code requirements in the brochure. There were no cute mood board accounts like @apres_golf; there was no Depop; and even Google image search was a relatively foreign concept. With a lack of inspo back then, I felt I had to compromise my identity in order to dress like a golfer, but I recall those summers fondly.

Luckily, there are brands who’ve made it their mission to challenge the dorky collared-shirts-tucked-into-khakis look. Whim Golf, a Chicago-based apparel brand made “for people who might like golf,” is in it for the long game, creating versatile, fashion-forward clothing that you can wear on and off the links. Their pop-up shop on the Lower East Side last year advertised “FREE GOLF!” in the way you’d say “FREE KODAK” (their words); meaning, they aim to free golf from its historically misunderstood image as a game controlled by stuffy country clubs, and from its stereotypically wack style. Of course, there are dress code rules you must abide by at certain courses, but Whim finds creative workarounds, offering brightly colored collared quarter-zips, beautifully tailored pants, and abstractly patterned mock necks.

People in the know also turn to Malbon Golf, a company founded in 2017 that makes stylish, skate-inspired golf apparel. If you squint, you might confuse their minimally scripted logo for the Titleist one — Malbon’s font choice is just a tad more whimsical. In addition to being sold at their flagship on Fairfax Avenue in LA, Malbon is also sold at retailers like Manor, based in Phoenix. Manor’s founder, Jeremy Davis, explained that brands like Malbon have been somewhat of a gateway drug into golf for younger people. In other words, the fashion heads and the hypebeasts are drawn in by the clothes, and wind up getting into the game as a result. It doesn’t hurt that legitimately cool people are getting more and more into golf. Beyond Michael Jordan, contemporary NBA players like Steph Curry and J.R. Smith, mega-stars like Drake and Harry Styles, and legendary skaters like Eric Koston all love it — and they look good doing it. These are golf outsiders who are changing the game before our very eyes.

“The pandemic has also been huge for the sport,” says Emilia Esser, press and communications manager at J.Lindeberg, a Swedish clothing brand that focuses on bridging the gap between sport and fashion. “All types of people have picked up golfing in the past year because it perfectly fits the moment: it’s a socially distanced, outdoor activity.” J.Lindeberg has been early and influential on the trend of making golf look modern, with roots in fashion and stylish female golf ambassadors like Nelly Korda and Mariah Stackhouse. They are fresh, charismatic players who wear JL’s bold logo and color-blocked styles gracefully, turning heads on and off the grass. Esser says she wears her J.Lindeberg golf clothes around Brooklyn and receives frequent compliments — they’re made for performance, but they also fit in (and stand out) amongst the fashion snobs.

These new brands often pay homage to the golfers who’ve paved the way for the moment we’re in now. Of course, there’s Tiger — who forever changed the game in a broader sense — but he is just one man. The Whim designers cite Arnold Palmer and his quintessential cardigans as major inspiration, along with Gary Player and his signature all-black fits. Esser from J.Lindeberg raves about legendary Swedish golfer Jesper Parnevik and his famous pink pants. Stylist and photographer Mordechai Rubinstein (aka @mistermort) is all about the old-school look. “I like rules, I like formality,” he muses. “It’s a classy sport.” He’s more of a traditionalist when it comes to appreciating golf style, citing the knickers and argyle emblematic of the vintage game.

As for right now, it’s not just NBA players and musicians who are shaking things up on the course. Jason Adel, CEO of GOLF Magazine, acknowledges the sartorial shift occurring amongst players themselves: “Style is important to the next generation of golfers, who grew up wearing Air Force 1s and flat-brim hats,” he says. “They’re great at blending traditional golf fashion with what’s ‘cool,’ presenting a new approach to dressing — and it’s important for golf to embrace that change.” I did my own research to verify this claim and found a range of younger pros making a name for themselves through clothing. There are players like 30-year-old Brooks Koepka, who responded to writers and TV commentators, perplexed by his zip-tie Off-White golf shoes, with three iconic words: “It’s fashion, bro.” Then there’s Jason Day, gracing the greens of the most revered golf tournaments in cuffed pants and high-top Jordans. There’s also Michelle Wie, a personal favorite, who’s been known to rock those elastic ‘90s chokers while she plays. As with any industry, self expression is essential to growth — and it’s refreshing to see golf slowly but steadily adapting to the times.

Where does that leave the current state of golf fashion, and is there enough interest to fuel a mainstream trend? “I wouldn’t say golf is becoming ‘cool’ in the typical sense,” says Michael Williams, avid golfer and founder of OG menswear blog A Continuous Lean. But, he explains, as more people get into the sport, more people are going to make it their own. “I think a lot of people gave golf a second chance in the past year and have found they really enjoyed it, but they’re not going to go to a Dick’s Sporting Goods and buy a bunch of new golf clothes,” he explains. Like the next-gen pros, they’ll wear what they wear and play the game how they’d like to play. The more that golf style merges with everyday wear, there could be a lean toward mainstream crossover. In the meantime, golf is a good place to go for inspiration if you’re looking for something beyond the now-tired “normcore” trend, or the arguably played-out Lady Di look and tennis aesthetic that exploded over the summer. Sporty slim cardigans, tailored trousers, embroidered polos, preppy patterned blazers — mixing vintage with new — there’s a whole world of style to borrow from and render your own if you’re open to it. Fore!

NEXT UP
Fashion
Cybercore Is The Next Tech-Inspired, Y2K Fashion Aesthetic Trend
Fashion
The Popcorn Top Is The Latest Y2K Trend Making A Comeback
Fashion
Corsets Were Trending On The 2022 Met Gala Red Carpet
Fashion
Put Away The Mini Bag, It’s Time For Big Roomy Totes To Shine