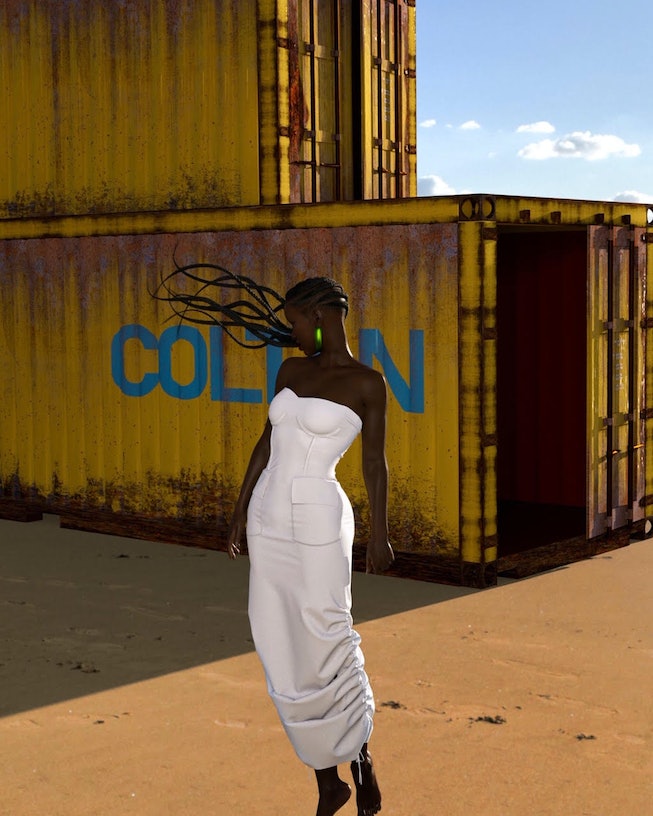 Designer Anifa Mvuemba, best known for her eight-year-old brand Hanifa, had to reclaim one of her biggest fashion career moments this summer. Nearly a week after the debut of her virtual runway show in May, which took place on Instagram Live and featured (invisible) 3D models in her Pink Label Congo's sophomore collection, a fashion tech company was promoting its own upcoming livestream of "the first-ever digital 3D fashion show" on Forbes. After countless tweets and comments from the brands' fans, as well as a co-sign from Essence, the company retracted its statements and the Forbes article was taken down.

"It was a lot of emotions because after the show, we weren't really prepared for the aftermath. It was really great; we were seeing [the show] everywhere, we were being interviewed on so many different platforms that we never had before. Then [the murder of] George Floyd happened literally the week after and then it’s Black Lives Matter," Mvuemba tells NYLON. "So for me and the Black community, we're essentially mourning and fighting yet again for our lives, really. The article came out and my first thought was, 'Wow, this is so tone-deaf because there is so much going on. This is literally what we're fighting for.' It's a form of erasure not just for me, my team, and other designers coming up, but also for the Black journalist who actually wrote the first Forbes article because Forbes did feature the show, as well."

Mvuemba's loyal fans and champions of her work were the ones who truly pushed for her recognition online, which naturally comes with the territory as Instagram is where her brand Hanifa first launched and has grown since 2012. After posting a fit pic on her 21st birthday — a chartreuse-and-slate strapless jersey dress with taffeta trim that she made herself — it caught the attention of her followers, family, and friends. Soon after, they were requesting their own custom orders. "It was history from there," says Mvuemba. She quit her retail job and dropped out of college (Morgan State University's fashion merchandising program) to pursue fashion design full-time.

"I would use the custom orders as a way to teach myself how to sew," recalls Mvuemba, who was first introduced to sewing as a junior in high school while growing up in Maryland. Her early DIY memories include trips to the thrift store and tailoring oversized men's pieces with cinched-in waists.

"If someone asked for a jumpsuit, I'd agree to it without really knowing how to make it. Then I would watch every single video, buy this book, read this article, and that's how I taught myself how to sew. That was me challenging myself and pushing myself to the limit," says Mvuemba. "Even when I did officially launch my brand, I still didn't know how to sew that well, so it's something I definitely learned to do over time."

Her perseverance has paid off. Hanifa's pieces are sharply tailored garments in bold, eye-catching colors with details that play on texture, like feather trim along the side of a pair of sleek trousers, or hand-tied tassels at the bottom of a figure-hugging corset skirt. The brand's bestseller is the Miya knit cardigan dress in an oversized and cozy wrap-style silhouette. "It's super comfortable," explains Mvuemba. "It's made for all women and all sizes."

Mvuemba's first major milestone for Hanifa was when singer Fantasia (of American Idol fame) wore the brand for a live performance at the 2016 BET Experience. Since then, her celebrity clientele has expanded to include Lizzo, Cardi B, and Kylie Jenner. In 2019, her business made one million dollars in revenue. That summer is when she launched Pink Label Congo, whose virtual runway presentation is also (and obviously) considered a huge success — pieces from the show's collection sold out within a week. "It did exceedingly well," says Mvuemba. "Beyond what we even thought or were even prepared for, so we're really grateful for that."

And Mvuemba isn't slowing down anytime soon. She recently released a new swimwear collection and is currently working on expanding into shapewear. "I wanted to create shapewear for a Black woman specifically because I'm always wearing shapewear. I can't wear a dress or skirt without it," says Mvuemba. "But I found it hard to find one that actually matched my complexion. I want to create shapewear for women like myself; women who look like me."

There's also a plan to officially launch Hanifa Bridal at the end of the summer, inspired by her sister's upcoming wedding, which was originally scheduled for April but was unfortunately canceled due to the coronavirus pandemic. "Her wedding was going to be a whole photo shoot production for the launch," says Mvuemba. Online followers first learned about this new endeavor once Pink Label Congo's show happened on Instagram Live. "We were supposed to stream it on our main page @hanifaofficial but for some reason, we were having really bad technical difficulties," recalls Mvuemba. "At the time of the show, we were actually an hour-and-a-half late, so we ended up showing on the @hanifabridal page, and now that page has a following." (16.5K followers, to be exact.)

So far, 2020 is showing just how much and how far Mvuemba and her brand have progressed, from party dresses to wedding gowns. "It's an evolution of me going from a young woman to a woman-woman now," she says. "The brand has really grown, the quality has grown, the overall message and visuals. The best way I could describe it is it really started from being a baby to now a woman. There's been levels each year; something new each year. New growth, new challenges, new things, but all for the better."

NEXT UP
Fashion
The Wildest Front-Row Looks From Couture Week In Paris
fashion
How ‘Spice World’'s Costume Designer Nailed The ‘Scooby-Doo on Acid’ Look
Culture
The Cutest Couples At The 2023 Grammys
Fashion
Jenna Ortega Is The Face Of Adidas’ Newest Line
Style + Culture, delivered straight to your inbox.