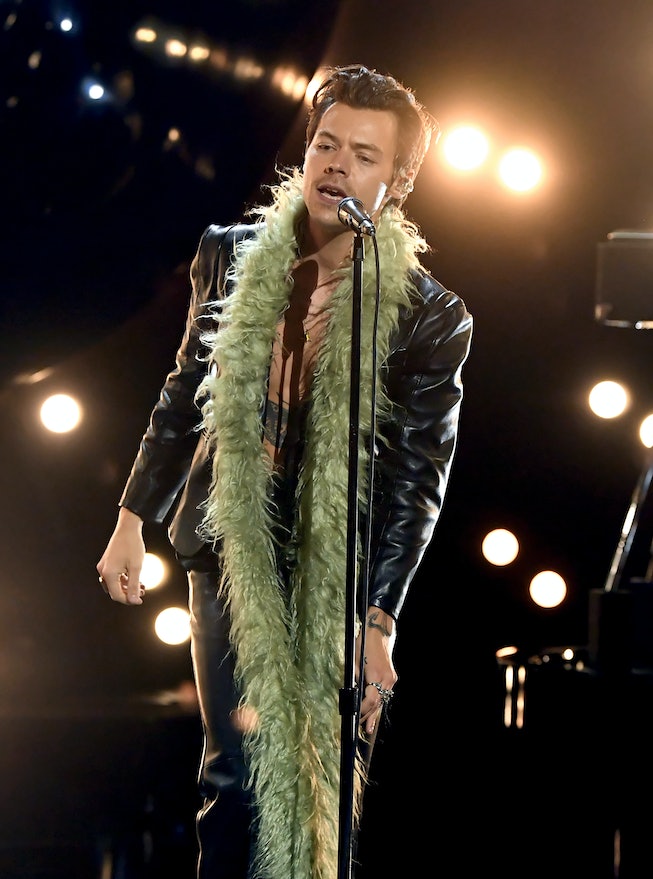 After wrapping up shooting his new film Don’t Worry Darling (and having a part in one of 2021’s first new celebrity couples), Harry Styles switched gears to music for the 2021 Grammys on Sunday. Of course, he served a major fashion look, too.

Styles opened the 63rd Grammy Awards with a live performance of “Watermelon Sugar” in a custom black leather suit by Gucci. He accessorized the outfit with his abs and a green faux fur boa that we all wish we were at that very moment during his on-stage performance.

Styles is one of 24 artists slated to perform throughout the awards ceremony, including Bad Bunny, Cardi B, Taylor Swift, and more. His catchy single “Watermelon Sugar” is also up for the Best Pop Solo Performance award, as well as Fine Line for Best Pop Vocal Album and “Adore You” for Best Music Video, so we’re hoping we get just one more fashion ensemble before the night is over. This year’s awards ceremony marks Styles’ first-ever time being nominated for the Grammys.

While we cross our fingers for another Styles cameo this evening, see more of his 2021 Grammys performance look, as well as his red carpet appearance, which he switched colored boas and leather for houndstooth print, velvet, and a sweater vest, below.

NEXT UP
Culture
Caroline Polachek In KNWLS & More Party Photos You Missed
Culture
On The List (With Melissa Rich): How To Throw The Ultimate Apartment Party
Entertainment
Harry Styles Is Performing At The 2023 Grammys
Entertainment
Samia On 'Honey' & Saying The Ugly Part Out Loud
Style + Culture, delivered straight to your inbox.