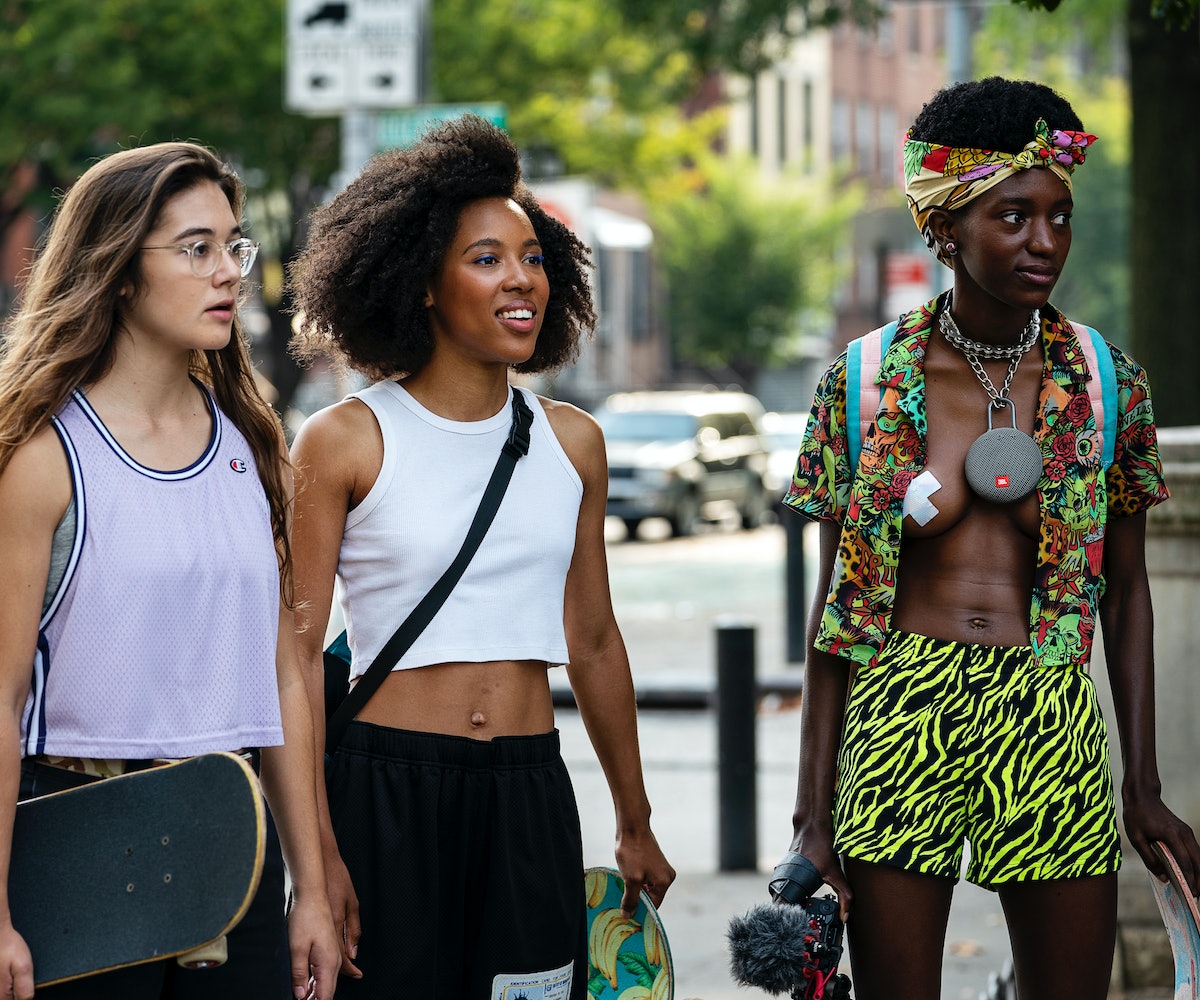 After premiering at the Sundance Film Festival in January 2018, Skate Kitchen, inspired by and starring the all-women skateboarding collective, was picked up by HBO for a spinoff series called Betty, debuting on Friday. The new show follows the reprised roles and members of Skate Kitchen — Camille (Rachelle Vinberg), Kirt (Nina Moran), Janay (Dede Lovelace), Indigo (Ajani Russell), and Honeybear (Moonbear, also known as Kabrina Adams) — as they navigate their way through New York City and take on territorial skate crews, love interests, and the ups and downs of their own friendships.

Directed by Crystal Moselle, who also worked on Skate Kitchen, the six-episode series is a stylish balance between the Betty cast and their characters' wardrobes. Costume designer Camilla Garmendia, who also worked on Skate Kitchen, managed to achieve this through collaboration and making sure to spotlight New York's indie fashion and skate scene. Plus, having grown up around skateboarding culture and kick-starting her styling career in the city, it was easy for her to reach out to and work with local brands for Betty.

"The girls have grown up a lot and their style has progressed with the times, but they're still pretty true to who they are," Garmendia tells NYLON. "They have such individual styles that it was really important for me to be able to channel that since they're playing a version of themselves in a way."

Below, we asked Garmendia and the cast of Betty to break down their personal style and how that tied in with their roles for the show.

In Skate Kitchen, we first discover Camille sneaking out of her home to take the Long Island Railroad into Manhattan to skate, where she meets her new crew of friends. Throughout the film, her fashion choices evolve, and in Betty, we find Camille much more comfortable in both her own skin and her style. "At the very beginning in the movie, she is more of a suburban kid and really comes into her style as she starts hanging out in the city and getting exposed to the culture," explains Garmendia. "It's pretty classic, simple but stylish."

"She probably tries a little bit harder to fit into the latest trends," Vinberg tells NYLON. "A lot of the outfits were inspired by what I would come into the fittings wearing, or what Camille, our stylist, saw me wearing outside." One of Vinberg's all-time favorite outfits from Betty is a yellow button-up shirt with a snakeskin print paired with green-blue Dickies, which she wore during a scene to confront Bambi, played by Edmund Donovan.

Moran's wardrobe is just as expressive as her character Kirt, along with a heavy dose of tie-dye. "It was really important to stay playful with her and her color palette," says Garmendia, noting Moran's love for pink, blue, lilac, and tie-dye (her style signature).

The swirly, trippy print was something that Moran started experimenting with in high school. "I used to wear no colors at all, just a brown hoodie and skinny jeans every day," she recalls. "One day, I decided to get a tie-dye kit and I played around with it. After that, I only wore tie-dye T-shirts but it was a different color every day. I like tie-dye because it doesn't really have rules and you can kind of mess it up, but still get cool results." Naturally, Moran's favorite pieces from Betty include two tie-dye shirts from a collaboration between artist Tony Tafuro and designer Kevin Emerson.

"It's so fun to dress people in a way that not everybody dresses," says Garmendia. "And I feel like with these girls, you get to explore things that aren't the norm for people to wear. They're so individualistic and Nina is definitely one of them."

Honeybear's unique outfits are a true reflection of Moonbear, also known as Kabrina Adams, and her own sense of style, which often involves a chain necklace with a JBL speaker, mismatched sneakers (hi-top Vans were in constant rotation while filming Betty), and pasties, which Moonbear stocks up on from Nippies, Neva Nude’s Nipztix line, and Pastease.

"Moonbear is really amazing because you see her just wearing pasties and it doesn't feel like she's topless," says Garmendia. (The tops and vests Moonbear did wear throughout the show were mostly sourced from vintage shops and eBay.) "We accept men doing this every day; what's so crazy about a girl doing it? She sort of removed the stigma in that, which is hard to imagine but is actually true when she walks into a room."

There was a lot of collaboration between Garmendia and Dede Lovelace for her character Janay. "I wanted to make her relatable to other girls who skate and dress like an actual skater and not a Betty," says Lovelace. "Her wardrobe needed to be vibrant, full of colors, lightweight clothes for comfortability, and real street. That's where you will see a lot of similarities between Janay and myself."

Garmendia recalls Lovelace often sending over brands that she liked and wore often: Nike, Iggy NYC, The Good Company, Awake, Supreme, and Stüssy, along with a few rare pieces from friends or that she collected over the years. "Dede was the one who we really used clothing of her own," she says. "The Supreme Obama shirt that she wore during her birthday scene was her personal shirt. She wore it one day and I was like, 'We're using that.'"

The shirt, which was worn with purple swimming trunks, happens to be Lovelace's favorite outfit from the show, too. "It was a vibrant and fun 'fit that showed her animated style," says Lovelace. "A lot of the clothes Janay wears on the show, I would wear in real life. Maybe not so much the shorts because I feel too exposed while skating but Janay is more daring than I am."

Indigo, played by Russell, has the trendiest aesthetic of the Betty crew, incorporating pieces inspired by the '90s or Y2K fashion. "It was really fun. I got to use some more fashion-forward pieces for her," says Garmendia. "She plays a girl that has a little bit more of a budget."

"My character in Betty is a lot more 'girly' than I tend to be on a regular day," says Russell. "She doesn't dress with intentions of getting messy or dirty. My art practice can get messy, so I wear clothes expecting to get paint or clay on them, or falling down at the skate park or in the street." But Garmendia made sure to incorporate Russell's own interests into Indigo's style, like a Goku shirt because of her love for anime. "Dragon Ball was a big part of my childhood so I'm glad it followed me into the series," says Russell.

One of Russell's costumes did, however, serve as a challenge for Garmendia on the set of the show. Towards the end of the season, Indigo wears a designer coat for a photo shoot, but the Gucci faux fur coat that was originally ordered never arrived. "We were shooting the scene the next day and needed the coat," remembers Garmendia. After tracking down the only store in the city who had one coat in stock, she quickly got in an Uber to pick it up.

"My driver's name was Farouk, and with Farouk being one of the characters in the show, it felt like a good sign," says Garmendia. "When we got there, the store was just opening. Once the lovely manager showed us the coat, we exhaled. It turned out to be even better than the one we had originally chosen."