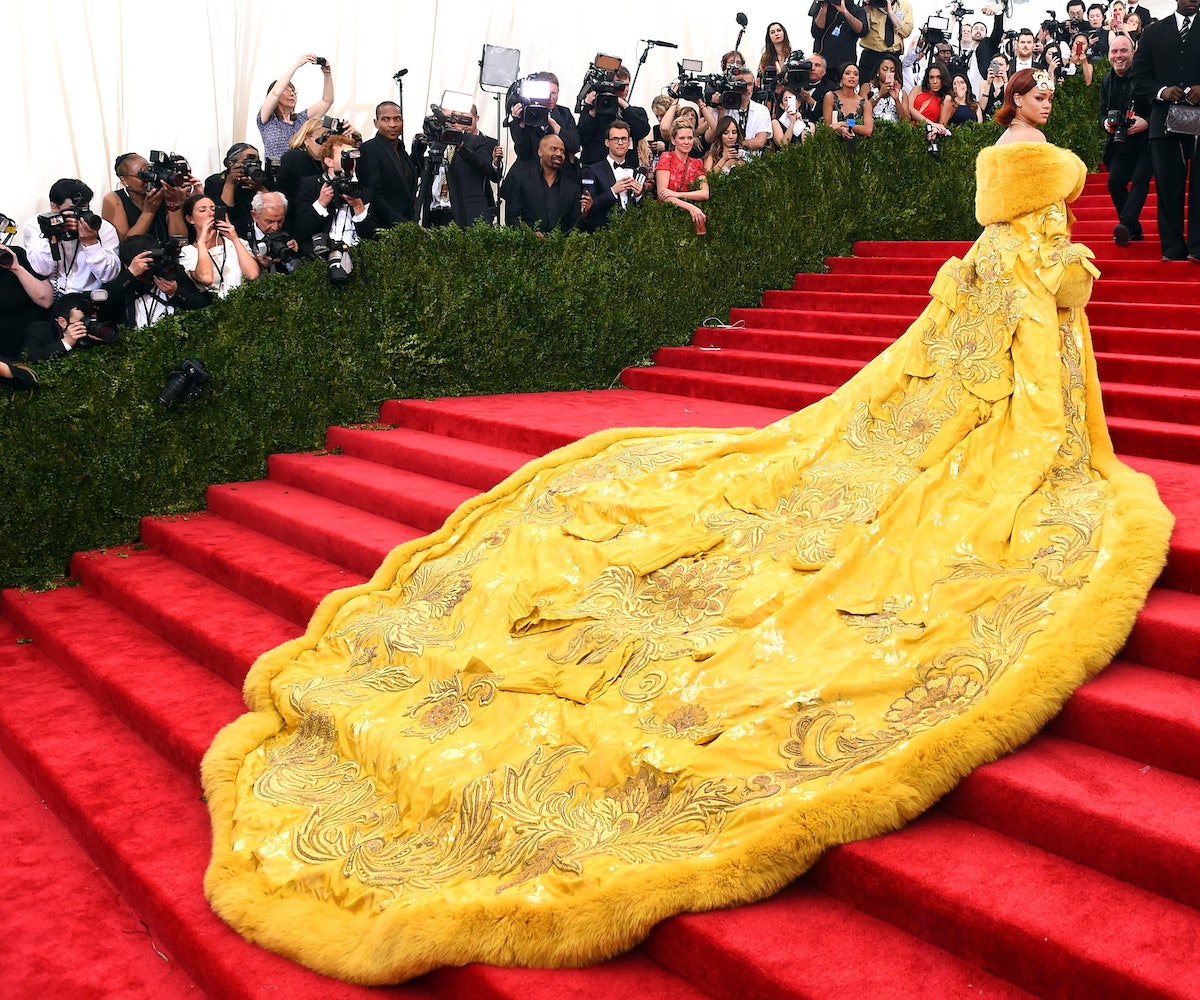 The only people who love the Met Gala more than the attendees of the Met Gala are the members of High Fashion Twitter, also known online as "hf twitter" (lowercase stylization intended, for the aesthetic). The Twitter subculture is composed of devoted fashion lovers who express their adoration of — and sometimes disdain for — the industry online. When the Met Gala was postponed from its first Monday of May date, many were devastated. It was also a clear sign of how dire the COVID-19 pandemic has become, if it meant that fashion's high priestess Anna Wintour would move the biggest night in fashion. But to quote one hf twitter user: "We said f*ck the virus, we ball!"

The user in question is one of the organizers behind hf twitter Met Gala, a digital replica of the IRL event. While the actual gala has been postponed indefinitely, hf's Met Gala will go on as scheduled. Aria Olson, the creator of hf twitter Met Gala, thinks there is no better way to relieve everyone's tension than by creating a sense of normalcy on one of fashion's most anticipated nights.

"If you've spent more than five minutes on any social media platform [these days], you get this apocalyptic sense of dread leaking out of every crevice. People are scared, people are anxious. It feels like everything is crumbling, not just because of COVID-19, but the larger political climate in a lot of countries. It's difficult to find moments of beauty and joy in desperate times, and without those moments, it's so easy to fall into apathy and cynicism," Olson tells NYLON.

Though you may not guess it by looking at their commentary on years' past events (by their own admission, they are humorously but brutally honest with their criticisms), the Met Gala is widely beloved by hf twitter — and given the digital nature of the community, it's also a homecoming of sorts. "There's a running joke within the hf twitter community that once fashion week is over, we all say goodbye to each other until the next one. The Met Gala is one of those events that kind of brings everyone back to our timelines," says Olson.

The Met Gala, the real one, is symbolic in more ways than one. In addition to unveiling the Metropolitan Museum of Art's Costume Institute's annual spring exhibition, it is a celebration of innovation and spirit in the fashion industry. It is, of course, also a night where celebrities put on their best borrowed couture and give fans stan-worthy moments and meme material to last until next year. In the words of another hf twitter Met Gala organizer: "It's the one day a year fashion is truly viewed as art and not just a business."

"It's the one day a year fashion is truly viewed as art and not just a business."

Keeping hf twitter's Met Gala slotted for the first Monday in May was an easy choice for the organizers to make. "The Met Gala, despite its flaws, is something hf twitter has always looked forward to and the cancelation of that hit hard for a lot of people. It's not fun to watch the light at the end of the tunnel get snuffed out," says Olsen.

The "flaws" she's referring to are the criticisms that the Met Gala is just another example of the wealthy flashing their wallets, while the average American is struggling to pay rent. It is allegations of gatekeeping in an industry that is already exclusive to people of color and those without built-in networks. While these claims aren't necessarily untrue, these are also issues that hf twitter discusses at length year round — sometimes more than the actual industry itself.

But what hf twitter Met Gala offers is a digital reinvention of the real thing. It is stripping away its inherent classism and keeping the focus on the culture and art. In the weeks leading up to May 4, curators of the hf twitter Met Gala will be posting informative threads about this year's theme ("About Time: Fashion and Duration"). When asked about specifics, the organizers teased topics such as "the influence of menswear in womenswear to dandyism and Beau Brummel; the use of women's clothing as a source of power to punk fashion," as well as conversations around sustainability, which has become an increasingly hot topic for the industry.

Then, on the day of, users are encouraged to share what looks they'd wear or style celebrities in, giving each other space to comment on one another's choices. Since hf twitter Met Gala is, obviously, online, there is plenty of room for imaginations to go wild — not that hf twitter ever needs permission anyway. "In real life, you might not be able to pull that priceless archival Schiaparelli piece or wear the amazing Westwood heels because of the delicate condition," says Olson. "But those boundaries don't exist in the online world. [This] opens the door for people to fully express a creative vision without having to worry about real world issues. It's almost like a higher form of escapism, one where fantasy reigns supreme and impracticality isn't an issue."

Not that anyone doubted them, but hf twitter has pulled together an extraordinary organized community event — one that is not only accessible, but welcomed in light of current realities. Knowing hf twitter, one can expect lavish and educational commentary and plenty of Bella Hadid content all around. And who knows? Maybe a bored quarantine celebrity will join in on the celebration.