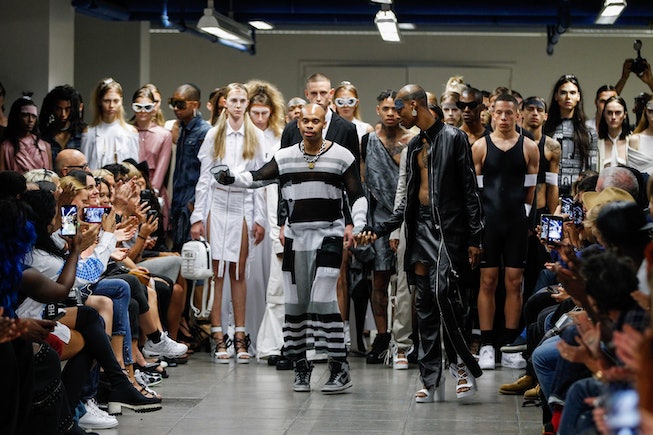 At long last, 2020 brings some good news: Hood By Air is back. The beloved high-fashion streetwear label, which officially went on hiatus in 2017, has relaunched with Anonymous Club, "a vehicle to promote and sponsor young talent," according to the brand's announcement on Monday.

"In recent years we have seen the creative industries distance themselves further and further from real culture. Radical works have been pushed out by gentrification," wrote Hood by Air on Twitter. "The youth have been robbed of the physical and psychological spaces necessary for new ideas to grow. The system is antiquated, and we want to replace it with something new. There is another world that needs to be created. We've done it before, and we're doing it again."

Back in February, designer Shayne Oliver spoke to Business of Fashion about his plans for the future of Hood By Air, though he stopped short of divulging any concrete details.

"How much was done in that span of time really, it's kind of crazy," he said. "I didn't understand how cool it really was. I just knew it felt organic and good … The new projects speak towards learning from that."

Back in 2019, Oliver spoke to SSENSE about the brand's comeback, revealing that he hoped the new iteration of Hood By Air will work outside of the normal fashion system.

"Through runways, these younger kids essentially just become mood boards for bigger corporations who have the capability to push out [their] ideas at a faster, more commercial, more developed rate," he said. "I don't feel the need to be in that conversation. I want to remove the brand from the conversation of just fashion in general, and allow it to exist outside of the fashion system, so people can really see I am not trying to prove anything or create a vocabulary for the fashion world."

See more of Hood By Air's official announcement, below.