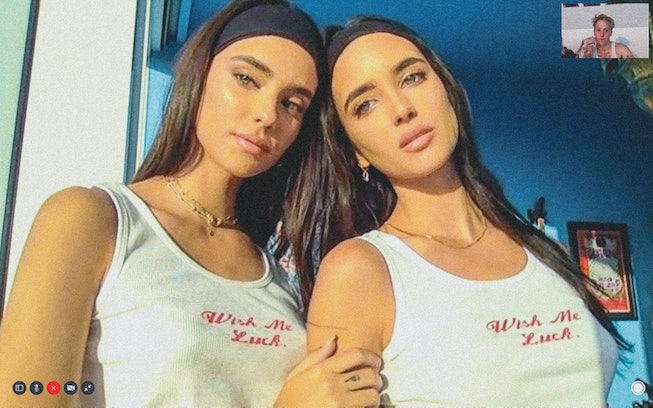 While the world is ordered to stay at home as much as possible, artists are tasked with working remotely, which can come as a challenge since most of their creative projects thrive on collaboration. But the new normal has inspired a slew of photographers to keep on shooting — albeit virtually and over FaceTime — while in quarantine.

Sam Dameshek, who's based in Los Angeles and has worked on campaigns for Tommy Hilfiger, Puma, Guess, Frankies Bikinis, and more, wasn't used to taking such a long break from his work. So he decided to try his hand at a FaceTime photoshoot after noticing another photographer taking pictures with a webcam. "The first one I did was with my friend Gizele [Oliveira] and I was just laughing the first five minutes because I thought it was so absurd," Dameshek tells NYLON. Next, he did a shoot with twin models Elisha and Renee Herbert for his new clothing brand Wish Me Luck, which has garnered more than 31,000 likes after posting his photo series on Instagram.

As fashion publications are reassessing how to work from home, many have started creating covers and editorials virtually, too. i-D launched a special project, titled "Safe + Sound," featuring models like Gigi Hadid, Adut Adech, Binx Walton, and more photographed over FaceTime by Willy Vanderperre. For Vogue Italia's April 2020 issue, an editorial with Bella Hadid was also done via FaceTime, shot by Brianna Capozzi. Chances are we'll be seeing this new artistic style from more magazines over the coming months, as well. According to The New York Times, upcoming issues from GQ and Marie Claire will likely take on a more DIY approach towards visuals.

"At first this was just a matter of convenience and what's available because I would never do this otherwise," says Dameshek, who has already been fielding more requests on doing shoots via FaceTime, as well as a potential campaign deal by a brand. "But now that I've done it, it's actually something that I think would be cool regardless of the circumstances in the world."

Below, Dameshek took us through his process of doing a FaceTime photoshoot, all while giving his best tips and practices along the way.

Pretty self-explanatory as far as using FaceTime goes. Dameshek and his subjects both use laptops to shoot, but upon further research, we learned that Yorkshire-based photographer Tim Dunk, who's been shooting his own lockdown portraits on FaceTime, has his subjects use an iPhone for better camera quality. Either option works. Plus, make sure your Wi-Fi connection is at its best performance to avoid any blurry imagery.

FaceTime Photoshoot Tip #2: Find a time when the natural lighting is best

Set up a time to shoot when the natural lighting is best at your subject's home. Dameshek and the Herbert sisters decided on between 4 and 5 p.m., the bright and sunny period just before Golden Hour. And while a traditional photoshoot would normally take about two hours for Dameshek, that timing is slashed to a short-and-sweet 30 minutes on FaceTime. Though, with almost everyone staying home these days, you could go for longer, of course.

FaceTime Photoshoot Tip #3: View where you are and get comfortable

The first thing that Dameshek does at the start of a shoot is view the space of his subjects, so he can get as much information on the location to ideate any potential photo ops. There's also a dynamic shift when you're shooting via FaceTime, he points out, since he's capturing photos of a place that he's physically not at and his subjects can now see themselves on the other side of the camera. "I would tell them, 'You can see yourself on the computer, so get a flow for how that feels," adds Dameshek. "It's always a little awkward at first but once you get the hang of it, it becomes a lot easier."

FaceTime Photoshoot Tip #4: Play with — and give directions on — angles

For those taking the photos, you'll have to direct your subjects on angles. "Once I figured out what looks good, I'll say, 'Put the computer here, back up a few feet, tilt the computer screen down a little bit, look here, look there," recalls Dameshek. "Essentially, it's like a real photo but instead of me angling everything myself, I have to tell them how to angle their computer and I have to direct them, as well."

While he was shooting the Herberts, he played with depth and perspective. "For the most part, I tried to stagger them, or I had them lay on the bed and hold the laptop above them," recalls Dameshek. "I had them put the laptop on the ground and stand above it, or prop it up on a bunch of books with Rene staying 10 feet away while Elisha is a little closer. I told them how to frame it, like having the computer down two inches, until it's perfect.

Since these shoots don't involve the sharp focus of a high-tech camera, models will have to hold pretty still when it's time to take the photo. "It's FaceTime quality so if they move a bunch, you'll lose a lot of detail," says Dameshek. "Even though it's quick to take a screenshot, it's not as quick as pressing a button on a camera."

Once you're ready to shoot your shot, take a screenshot with "shift, command, 4." The most common question that Dameshek gets is if he's screen-recording the FaceTime call and then going back to choose his photos, but that's not the case. "That's not what I would do in real life and I want these shoots to feel as similar to what I usually do as possible," he says. As for how many screenshots he ends up with after a shoot, he estimates between 50 to 60 photos.

Finally, it's time to edit your photos, which Dameshek does with Lightroom. "I'll add a bunch of things to bring out more detail and just the colors and give it more of a vibe so it doesn't look like a flat screenshot," he explains.

Of course, you could leave your images as is, since FaceTime certainly has its own appealing aesthetic, much like the nostalgia-inducing analog photography and whatever shows up under the #35mm hashtag. "Obviously because they are screenshots, they kind of have a look that you don't really get anywhere else," says Dameshek. "I think that's why people are drawn to it."