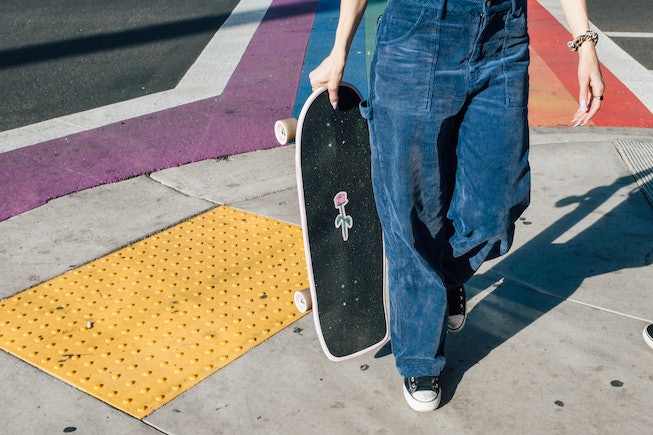 If you've been thinking about taking up skateboarding as the weather gets warmer, Impala might have your first board. Just in time for summer, the Australian brand best known for its roller and inline skates launched its debut collection of skateboards, cruiser boards, and longboards.

To kick off the special release, Impala teamed up with a crew of talented to artists to design the new collection, including Los Angeles-based Robin Eisenberg, New York's Art Baby Girl, Surfy Birdy from Florida, and Lisa Dino out in Melbourne. Each creation is as different as the next, and whether you're a skater or not, you'll want one for yourself — even if you just plan on showing it off as home decor.

The idea of expanding into this new category was always in the pipeline. Though Impala launched just three years ago in 2017, the company boasts more than 30 years of experience in the skateboard industry, and its factory has been producing boards for skate brands around the world.

The 11-piece debut collection offers old-school cruisers, longboards, skate decks, and complete skateboards, including a contest-ready version for the streets, skate park, and vert ramp. Along with the artists' collaboration pieces, Impala designed its own in-line range, featuring glitter grip tape and celestial, snakeskin, and pastel marble prints. The prices start at $54.95 for a skateboard deck and top out at $169.95 for a longboard.

Not only do the boards have a lifetime guarantee but each one is also manufactured with sustainability in mind: Impala partnered with the National Forest Foundation, a donation-based tree-planting program that will plant three trees for every tree that's harvested to make the brand's skateboards.

Below, we dive deeper into each of the artists' work for Impala's first-ever skateboard collection, which you can pre-order online now.

Working with Robin Eisenberg was a no-brainer for Impala's team: She was one of the first female artists to collaborate with Thrasher in an industry that's widely male-dominated. (If you're looking for more skate cred, she's designed for Vans, too.)

"The creative process is a little different just because you have to think about the canvas shape and where the trucks will be and stuff," says Eisenberg on what it's like to work with a skate deck. "But it’s really satisfying to see the finished skate deck."

Her "Saturn Skateboard" channels Eisenberg's aesthetic in the best way, since most of her drawings focus on what she describes as "alien super-babes in space." "For the deck, I thought it would be fun to draw an alien lounging on the rings of a planet, maybe taking a break and resting for a minute," she tells NYLON. "Mostly, I wanted the design to be cosmic and colorful."

New York City illustrator Grace Miceli, better known as Art Baby Girl, has built a following in the art and fashion world for her playful and colorful doodles of everyday objects that expertly tap into nostalgia and escapism. For her to design Impala's "Latis Cruiserboard" seemed like the perfect match, and the result is a fun pink product adorned with '90s memorabilia, like a flip phone, BFF pendant, Clueless-inspired fluffy heels, and emoji graphics.

"This is my first skateboard and I'm so excited about it," says Miceli. "I wanted to bring my traditionally 'girly' aesthetic into the mostly male-dominated space of skateboarding for sure. I loved thinking about all of the movement of the board while in use. The pop of pink during tricks seems like a really fun surprise to me."

Surfy Birdy (or Rachel DeJohn)'s artwork is rooted in surfing — so much so that she customizes surfboards with earth-toned motifs that pay homage to '60s-era surf culture. Naturally, Impala teamed her with their first longboard, called the "Jupiter," which is traditionally associated with the same lifestyle.

"I haven't had the opportunity to design a skateboard before, but was completely stoked to create one with Impala," says DeJohn. "I was able to hand paint this design which was scanned in to be printed on the skateboards. I'm a big lover of longboard surfing and skating and really excited to dance around on this board and to see others doing the same."

Lisa Dino, who's based in Melbourne, had the chance to design the collection's most technical and lightweight skate deck for professional or competition-level skating. Dino has partnered with Impala before, so she was tasked with making sure her artwork also reflected the skate deck's performance.

"I've painted blank decks for art shows and charities in the past but this is the first skateboard I've had the privilege of designing," says Dino. "The theme was something new for me to work on. Patterns in the background and consistent line-work isn't my usual style but I made it work and had heaps fun during the process."

NEXT UP
Life
Away’s Second Designer Collection Will Have You Traveling In Style
Life
TikTok Toasts To Latinx Heritage Month & More Party Photos You Missed
Life
How To Dress For Your Birth Chart, According To An Astrologer
Fashion
Target Debuts Three Blockbuster Designer Collaborations For Fall