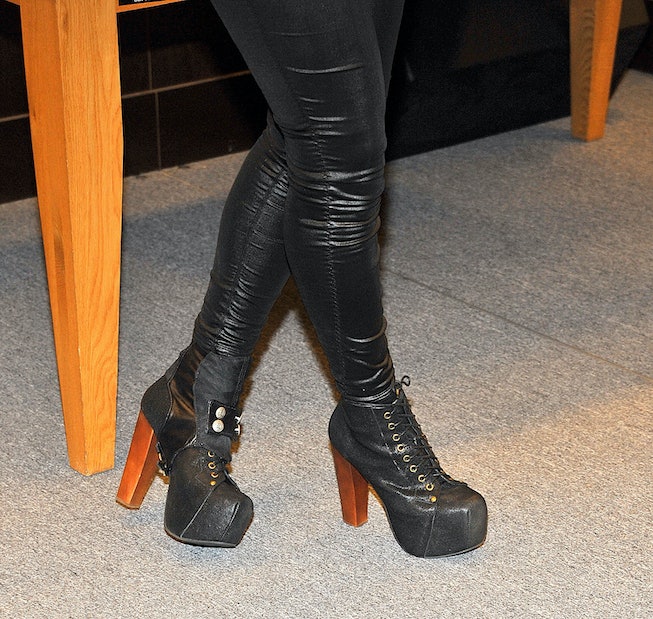 By now we have become accustomed to many once-forgotten trends finding a new life in the current decade. Crop tops, mini skirts, chokers, and more nostalgic aughts-era trends have all made their way back in some form or another, only to find open arms and wallets to welcome them. One trend that few can say is having its own 2020 renaissance is Jeffrey Campbell's Lita shoe, a chunky platform lace-up boot that came in just about every conceivable color and pattern.

The Lita, which was released in July 2010, was beloved by celebrities and civilians alike. Jessica Alba, Demi Lovato, Lindsay Lohan, and Snooki were all fans, and willing to be photographed while wearing them. Plus, the first wave of fashion bloggers — shout out Fashion Toast's Rumi Neely — helped with the shoe's sartorial success. While the Lita hasn't staged a full comeback as of yet, writer Marie Lodi is banking on one. On Friday, she commemorated its 10-year-anniversary on Instagram and Twitter, resulting in at least one person to go on eBay and purchase a pair.

I'm not one to judge a trend, especially those with the ability to transcend time and generations, but I struggle to make sense of a Lita comeback in a year so cursed that even murder hornets weren't able to secure a full 24-hour news cycle. 2020 is the year of sweatsuits and UGG slides; of DIY tie-dye and pajama short sets; of waking up and asking yourself what day and month it is. A platform boot? In this global climate? Haven't we suffered enough?