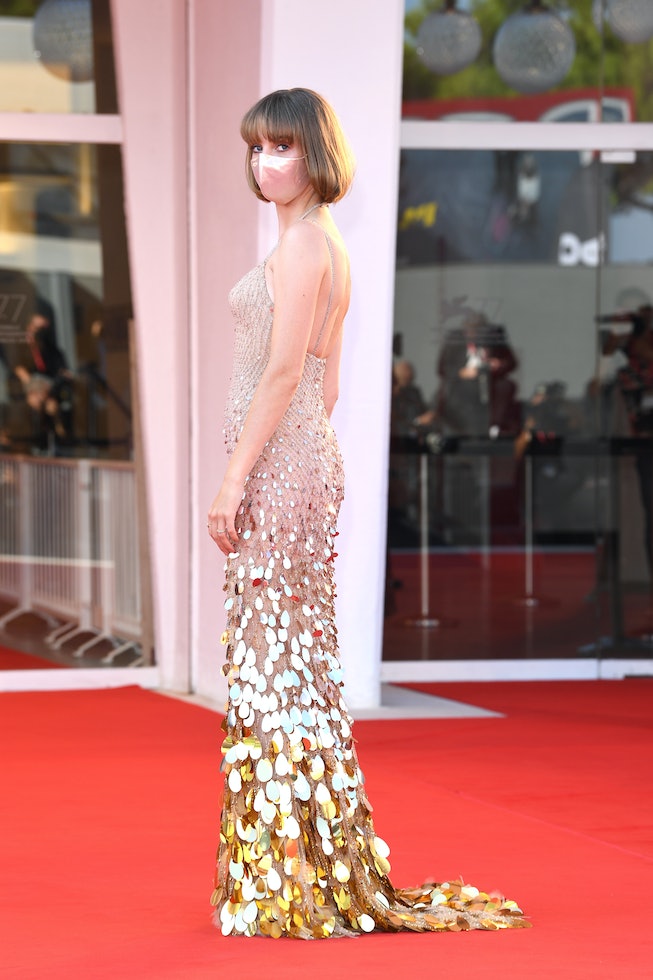 Red carpets are a thing again, at least in Italy where the Venice Film Festival is currently underway. For now, those of us in the States must live vicariously through Maya Hawke, who wore a nude Versace gown with chunky gold sequins at the premiere of her film Mainstream on Saturday, Sept. 5. She also maintained social distancing guidelines, as she wore a matching (and shimmering) mask on the red carpet.

Like most of the world, Hawke was struggling during the beginning of the pandemic. The 22-year-old actress moved back in with her mother, staying at her house in upstate New York to quarantine.

"I moved out and got my whole life together and became a person," she told NYLON in April. "And this disease is like, 'Ha ha ha, just kidding! You're a kid, and you live with your parents.'"

Prior to the pandemic, Hawke had just wrapped up Gia Coppola's new film Mainstream, where she played the lead role alongside Andrew Garfield.

"She's fearless, and in tune with a lot of different emotions. You have to have a lot of life experience to know what those things are," Coppola told NYLON. "In a lot of ways, she's very evolved. But she's so sweet and young-hearted at the same time. To carry both of those dynamics is what you look for."

Months later and Hawke appears to have moved back out of her mom's house, and headed straight to the Venice Film Festival red carpet. Check out her glamorous Versace look (sans mask), below.