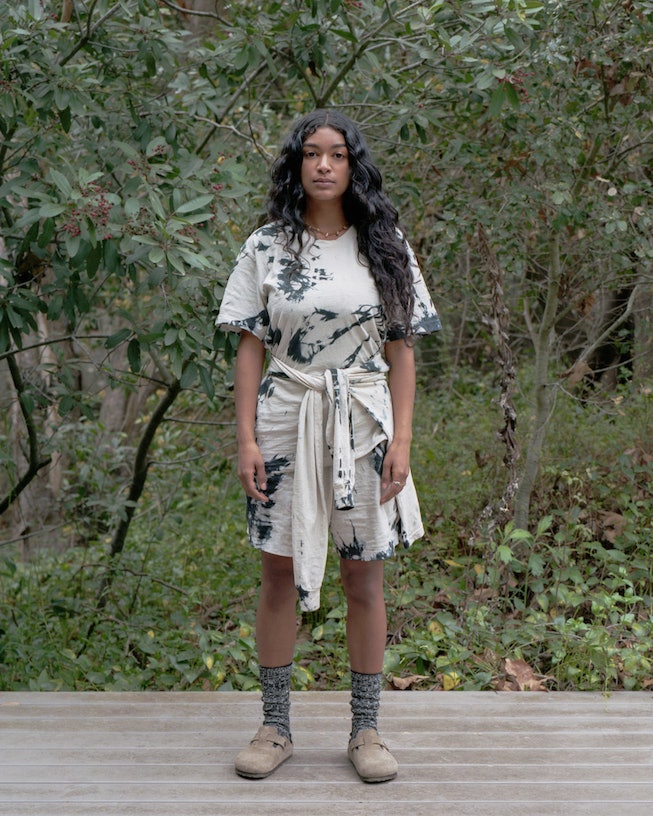 Courtesy of Come Back As A Flower

Before tie-dye took over our quarantine wardrobes, Esper, the Los Angeles-based designer behind Come Back As A Flower, was already building a cult and celebrity following for his own tie-dyed wares. And while most of us were attempting to DIY the print from home, Esper’s signature brand aesthetic came to fruition by accident.

“I was actually working on a different brand at the time. I didn't have enough money to buy more T-shirts, and I needed them in black. So I had to dye some of the ones I had, and I didn't do it right but it came out really cool,” Esper tells NYLON from his studio in Mid-City. “I was like, ‘Oh, this is way doper than the shirt I was trying to make.’ I experimented with a couple more, and then I finally made that one, and it was just downhill from there.”

This sparked the earliest iteration of Come Back As A Flower, named after the Stevie Wonder song, back in November 2018. What followed are a slew of fortunate events that continue to push and prepare the brand for what’s to come.

Growing up in L.A., not too far from where he works now, Esper was always interested in art and clothes. In high school, he applied to fashion schools in New York, but decided to stay on the west coast and study oil painting instead. After a year of attending art school, he decided to drop out.

“I went into it thinking I was going to become my own better artist, and from what I gathered in my time there, it seemed more like I was there to be a cog in a machine and serve the alumni's gallery, or the investment banker who makes contributions to the school,” recalls Esper.

Esper turned to nature to inspire him again, escaping the city and venturing up to Northern California where he spent nine months at a spiritual commune learning about meditation and experimenting with textiles. Afterwards, he finally made it out to New York in 2019, snagging freelance art gigs and a job at Celine. On the side, he started making tie-dyed shirts that would soon become CBAAF’s signature. His very first piece, called “Cosmic Furnace,” landed in the hands of Big Sean, which he still has today.

Soon after, his pieces were being sent off to A$AP Rocky, Travis Scott, Imaan Hammam, and Aleali May. The brand quickly took off among the celebrity set and Esper moved back to L.A. to focus solely on CBAAF that summer. By the fall, he landed a booth at Complexcon, where he offered pieces that he’d hand-dyed himself.

“It was my first time presenting the brand as an experience to people in physical form, so it was cool connecting with everyone. People really loved the clothes,” remembers Esper. “I got a lot more attention than I was expecting, made a lot of money, so I was blown away by it. People were just lining up and stuff. It was a good springboard into momentum, and then 2020 was just crazy.”

In February of that year, Vogue mentioned CBAAF in a roundup of Black-owned businesses, which earned the brand $50K worth of sales in just one month. “In a month,” reiterates Esper. “Which is crazy for any brand to do on e-commerce for just one product. But also as a new brand, it was a real moment that was like, ‘This thing is working. It's going to work. I'm not even worried about it. I'm just going to create.’”

That hero item is what Esper calls the Oatmeal set, a collection of matching hoodies, sweatpants, shorts, and tees made from recycled cotton that’s 100-percent biodegradable. Each piece is hand-dyed and made in L.A. with a pattern and colorway that toes the line between the trippy aesthetic that comes from tie-dye and a neutral palette that you can wear with anything. “The Oatmeal definitely was the first piece that I thought would be the staple when it comes to the brand,” says Esper. “It could survive forever.”

After generating more buzz from friends with dedicated followings and finding the brand’s first investor, Esper was able to shoot a campaign in Topanga Canyon to highlight CBAAF’s now-signature item. Retailers started to pick up the line, too, with exclusive pieces at Nordstrom, Browns Fashion, Urban Outfitters, and soon, SSENSE. In September of last year, he made his New York Fashion Week debut, joining 15 other designers for a special showroom presentation hosted by the Black In Fashion Council.

Sustainability is at the forefront of Esper’s work, especially as the brand expands and becomes more readily available. His retail experience at American Apparel first introduced him to how wasteful the fashion industry can be, and at Celine, he saw a “more grand version,” especially at a high-end, luxury level.

“That's when I realized if I'm going to create clothes, it has to fit into the environment neatly. Because we love buying clothes but no one thinks, ‘When I'm done with it, what am I going to do?’” says Esper. “One thing I will say about LVMH is that the clothes are so well-constructed that when you buy it, you want it for the rest of your life. I want to emulate that; create something that I can hold onto forever, pass it down to my kids, and let it exist.”

Beyond tie-dye, Esper is experimenting with graphics inspired by iconography, ancient petroglyphs, and pictographs. He’s also applying his dyeing techniques to vintage tees to give them new life. One goal for the brand is to allow customers to make their own tie-dye pieces online, much like customizing your own sneaker on Nike’s website. Esper still looks to nature when he’s seeking creativity, whether that’s going through NASA imagery or photos of poison dart frogs or nudibranchs. “So sick. Endless inspiration,” he says.

A cut-and-sew collection, including outerwear and jeans, is on the brand’s timeline one day, too. “I've been talking to a few pattern makers, but we have some exciting stuff coming for sure,” reveals Esper. “The brand is going to evolve in a big way. We'll see the first bit of it by the end of the year. And then by next year it will be like, ‘OK, whoa.’”