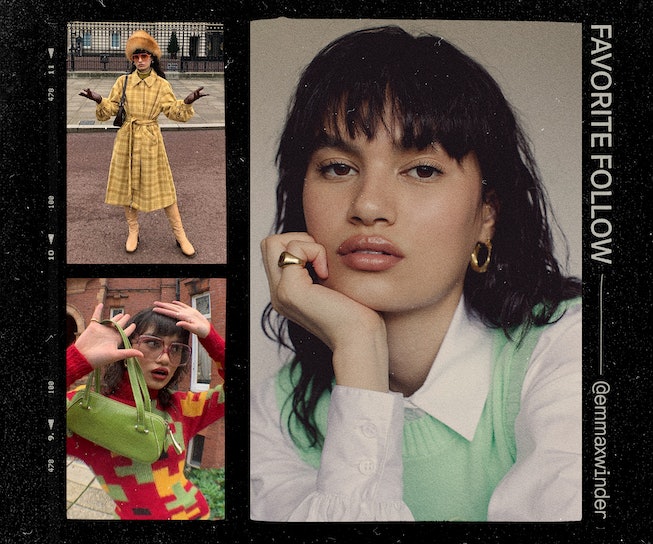 While most of Gen Z are scouring Depop and thrift stores for Y2K fashion to wear in their latest fit pics, Emma Winder is channeling the ‘70s in over-the-top sunglasses, flared pants, platform boots, and more. The 18-year-old YouTuber from Brighton, England, has been growing a steady following since launching her channel at the age of 14, which mostly featured beauty and skincare videos at first. “My approach then was completely different because I used to watch beauty and makeup videos every day after school, religiously,” she tells NYLON over Zoom.

But within the past year, Winder has finally hit her stride both with style and content, garnering more than 100K subscribers (and a modeling contract), as well as the nickname of “ur local grandma” from her followers that now serves as the tagline and inspiration for her upcoming merch line.

While her videos and Instagram feed are a balance between stream-of-consciousness vlogging, photo dumps, aesthetic edits, and, of course, stellar retro-inspired outfits, Winder’s creative process is much more technical and attentive to details than one might think.

“I always make storyboards for an outfit video,” she explains while holding up one of her latest towards the camera. “I take a visual idea, and then I have a storyboard and color themes. It's so messy and hectic, but it makes my brain think normal. I have to sketch it or visualize it in a way so I can see the camera angle or how I would do it. It's very technical for what I'm doing, but it's setting me up to what I want to do in the future. I might make a short film one day. Who knows? That's the process.”

Recently, Winder’s dad converted a space in their garden into her own studio, which is already fueling more inspiration for photography, set ideas, and backdrops. “It's now made me have more ideas on how I can really get my visuals right, because before, I only had my room or, I don't know, walking outside. It wasn't really interesting,” she says. “Now, my aesthetic and the way I'm getting more influences is different now and I can do something fun."

Naturally, her penchant for all things ‘70s will likely evolve over time, and an entirely new sartorial muse might come into play in the future. “In the end, it’s just me growing — my new aesthetic and my new influences that pushed on new creative ways of thinking and new video content,” says Winder. “Obviously, it's going to change in the next six months or year. I have no idea what it's going to be like, but I'm excited.”

Below, Winder shares some of her favorite outfits and social media creations, along with details on the process, inspiration, and meaning behind them.

On Unplanned (But Most-Liked) Fit Pics

“A lot of times when I do Instagram pictures, I have a roughly based plan thinking, ‘Right. This weekend, I'm going to take a picture with this outfit, this kind of vibe. Let's do it.’ Me and my brother were just driving around town because we were bored. It was really rainy, so I wasn't actually intending to have any outfit pictures taken, and then I was like, ‘You know what? I'm just going to take a picture.’

“So we drove past that building and we just took it with my fisheye lens that I had in my bag, and that was it. That was literally it. And that was my most-liked picture, no idea why, because it wasn't even planned. I actually bought that coat off Depop for £25. Bargain. What was I wearing underneath? That turtleneck is so itchy. It's actually unbelievable. I was scratching myself all over.”

On Channeling A ‘70s-Inspired Aesthetic

“This video was when I first started really diving into the '70s aesthetic. I've always recognized the aesthetic, but that's when I really took interest. I'm heavily influenced by a lot of old '70s films or even music and stuff like that. Stanley Kubrick films have a lot of good visuals. A lot of my videos are based on color, as well, so I like to take a lot of color from old '70s films or music videos or photography, from Pinterest, or old magazine articles, just loads of different things that I'll pick apart and then bring them into my style.

“I actually read this thing. I think I might have it. It's called anemoia, which is basically a feeling of nostalgia about a time that you never experienced, which is so weird because, obviously, I've never experienced the '70s. The oldest person that I know is my dad, who was a teen in the '70s. I'm not trying to be like, ‘Oh. I wish I was born in a different generation.’ No. It's just interesting that the aesthetic makes me feel like I've experienced it before, but I haven't.”

On Dressing Up For Shopping Trips

“Buckingham Palace drip. This outfit here, classic, classic. The hat's vintage. The gloves, I'm pretty sure they're vintage. The coat is from Monki, which I bought for £75. The knee-high boots are from Jonak, which, actually by the way, if you're listening, Jonak, you've got some great shoes. I've got some loafers from them, some boots. They're really nice.

“This was taken back in December 2020, so early December and it wasn't actually cold enough yet. That day, I went to London with my brother and we went Christmas shopping for our parents. That was before lockdown, unfortunately. Because we had to go to Victoria station, we actually walked instead of getting Ubers because I think it was only 15 minutes away. We went past Buckingham Palace, and I went, ‘Shall we just take a picture quickly?’ I'm pretty sure the Queen would approve because the outfit was pretty on point.”

On Finding Ideas For Fashion Videos

“That TV in the beginning of the video was actually my old childhood TV that we had. Me and my brother used to have share it when we were little in our room, and we used to put VHS tapes in there. And then I found an old vintage camera, which was actually a home video camera. The color scheme was probably from watching Wes Anderson films because his visuals are lovely.

“I think I was watching a lot of outfit videos at the time, and it was bestdressed — shout out to you, girl. I know you follow me. I don't know if she watches my videos, but if you do, love you, Ashley — I remember I saw her video, and I was like, ‘Wow. This girl's amazing.’ That was obviously when Ashley was really kicking off and growing her channel a year and a half, two years ago. So when I saw that, I was like, ‘Wow. I've got to recreate something like that. That was cool.’ So it's just pulling inspiration and putting my own twist on it.”

On The Future Of “Ur Local Grandma”

“I'm in the process of doing merch. It's a very long process, and it's very tiring because a lot of the stuff I do myself. I actually announced it on my Instagram, a little sneak peek before, but I'm just trying to sort things behind the scenes. I want to create stuff that I like or even just weird products that are funny and personal to me or references me. I would love to make sunglasses one day.

“Also, I'm going to start making a website going hand-in-hand with my merch, but also a space where I can blog stuff, a space for me to dump a lot of my recent obsessions or different projects. Maybe I might make some clothes or one-off pieces. I’ve also been obsessed with mid-century furniture. My dream would be making a vintage chair or something like that. I don't know. It's all flying around my head, but I would love to do something like that in the future.”