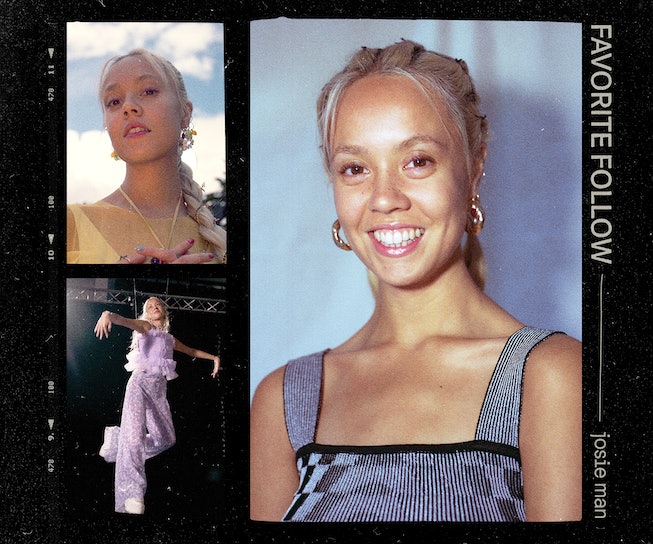 From just one look at Josie Man’s Instagram feed, you can quickly figure out her personal style: platform shoes are a must, rings are piled on like a second skin, and knockoff logo pieces from the likes of Louis Vuitton, Gucci, and Chanel aren’t off-limits. In fact, they’re a wardrobe staple.

“I used to go to Hong Kong quite a bit with my family, and there’s lots of markets there where I became obsessed with fake stuff,” the singer recalls over a Zoom call with NYLON from her home in South East London. “It's sort of tacky, but in the best way ever. I like to keep it a mix between real things and fake things, because I just wouldn't want to wear all real stuff.”

Her self-described colorful-meets-comfort sense of style is a reflection of her music, too. Man's latest single “Grow” is a dreamy pop song that’s both vulnerable and empowering (“I’ve been hurt, lessons learnt but nothing ever grows without it,” she says) with a glittery music video to match.

According to the singer, her personal fashion inspiration stems from a childhood love for Bratz. “I used to be obsessed; I loved the way that they look. They're so cute,” she says. “Whenever I see something that makes me feel like I'm a Bratz, I'm like, ‘Yeah, that's something I definitely would wear.’” Perhaps that’s where her penchant for platform shoes come from, which Man admits to be very particular about, especially when it comes to getting styled for shoots. “I always wear my own because I'm really weird about my shoes. They have to be at least nine centimeters tall.”

But what’s most important within Man’s wardrobe is her jewelry, which she wears at all times like talismans. On each finger is a silver ring that has its own backstory: a butterfly ring from Amsterdam gifted by her boyfriend; a souvenir ring from a family cruise trip to Mexico; a “sister” ring that her three sisters also have; two Gucci rings (one real, one fake); a ring from her cousin with all of her family’s initials, and more. “I get really invested in my rings. To me, they have a meaning to them, so I literally wear them every single day,” says Man. “They just remind me of who I've got.”

Ahead, Man breaks down her favorite outfits shared on her Instagram, including a DIY Chanel sweater made by her boyfriend’s mom, bootleg designer pieces from Depop, and more.

On working with stylists

“I actually have a harness on underneath that. This massive, massive harness. And so it's really uncomfortable. The stylist, Lauren Anne Groves, pulled two options, including a pair of silk shorts and a silver top. And I was like, ‘That's just not me at all.’ But with the peplum-style top and trousers, I was like, ‘Yeah, that's definitely me.’ And I added my platform shoes.

"Working with a stylist is right when they get you, but not when they don't because sometimes I'm better off doing it myself than having a stylist. But with Lauren, she really gets me. And that's when it works — when they understand your style rather than just trying to put their style onto you.”

On finding bootleg fashion on Depop

“That’s a fake Louis Vuitton cardigan that I got from Depop. It came with a pair of tracksuit bottoms that fit really weirdly, so I cut them and made it into a skirt. It's all really good quality and it just looks so good. You can wear it in the winter or summer. It's a cute piece to throw on.

"If you're trying to find something fake or bootleg on Depop, type in something like ‘Gucci inspired’ and that's when all the bits come up. Sometimes you just have to scroll, or put in a color that you want. You'll see one item and then go down and it'll be like, ‘Items like this.’ Then it takes you to a whole new thing. Depop's really, really good but you just have to be careful about the sellers. Usually if they go through PayPal, it's legit.”

On mixing high and low fashion

“That Gucci jacket is real. It's from the kids section from a shop here called Base and it's designer clothes for kids. I saw it and was like, 'I pretty much could fit into that.' And then I put it on and everyone was like, ‘Oh my god, you should get it.’ So I decided I'm going to treat myself this one time. I matched it with a Nike tracksuit because I feel like if you wear one piece of real designer and if you wear another designer piece, it's a bit in your face. I just don't like the feeling of being flashy. So I think if you pair it with a Nike tracksuit, it just dims it down a bit. And then I put some Kickers on, which have a little platform on them. It’s a shoe brand that I used to wear to school.”

On her favorite present ever: a DIY Chanel sweater

“My boyfriend's mom actually made that jumper. She did it for Christmas last year, and she was working on it throughout the whole year. She just knows me really well. I feel like she was me when I was younger. We're really, really alike, and she's obsessed with Bratz and Barbies, as well. It’s literally my favorite present in the whole world because I'm like, ‘How have you done this? You should be selling these. You should give this to Chanel.’ The skirt is the classic American Apparel tennis skirt. Even though it was freezing cold because it was Christmas day. Then I wore my white Naked Wolfe shoes, which have a nice big sole. If I've got something big on the top, I like to add a cute little skirt because I like the way it looks.”