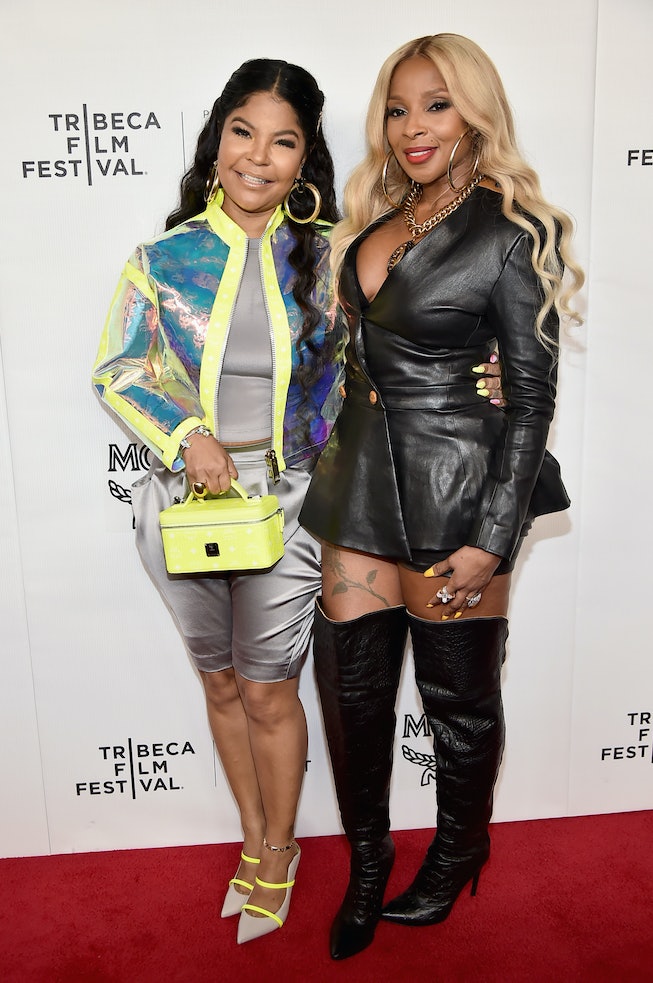 From Lil’ Kim’s iconic VMAs look in 1999 to Diddy’s logomania in the “Let’s Get It” music video, Misa Hylton is the brains behind many of hip-hop and R&B’s most memorable fashion moments. In addition to her stellar roster of clients, which also boasts Missy Elliott, Foxy Brown, Faith Evans, and many more, Hylton’s work with Mary J. Blige spans all the way back to the ‘90s during their early career days.

“Our creative process has always been very organic and authentic to whatever stage we were at in our lives,” Hylton tells NYLON. “In the beginning, there was a lot of focus on street style and hip-hop wear — combat boots, baseball caps, and jerseys. Then as we both grew as young women, the styles continued to transform, but always keeping those hip-hop elements, like the hoop earrings and the combat boot turned into a thigh-high boot, and so on.”

Hylton has managed to create signature aesthetics for every one of her artists. While Lil’ Kim’s looks are more fashion-forward and Elliott’s skew avant-garde, Hylton seamlessly mixes Blige’s personal style with high-end designer names while staying true to their hip-hop roots.

“My mantra is always believing in myself and my art. My fashion style and work is my art and really trusting it, which I've always done,” says Hylton, who turned her industry prowess into the Misa Hylton Fashion Academy. “As a creative, it's important not to second-guess yourself and your vision, because it's your gift.”

Ahead, we looked back on some of Blige’s most fashionable music videos and Hylton’s creative process behind each one, which includes outfits from Patricia Field, straight-off-the-runway Fendi, and ‘60s-inspired looks.

“We were inspired by Mary’s natural style and elevating it, making it fun and interesting. We didn't know the same things back then, the way that fashion styling is now. Creating a music video and looks for a music video is very different now than it was at that time. Everything that we did was organic and true to who she was and what she liked, and then adding my stylist edit.

“My favorite fashion era is the ‘60s, and her look with the black headscarf and sunglasses was inspired by Jackie O. Nzingha Gumbs, Mary’s makeup artist at the time, gave her the black lip, which became a huge trend. Dionne Alexander perfectly coiffed Mary’s signature ‘swoop’ and ‘updo’ hairstyle.

“Mary also wore a Fendi Mongolian fur straight from the runway, accompanied with a pair of ‘twistie’ hoops because earrings are a hip-hop staple. There was a management team courting Mary at that time and they were on set. They asked if I could change her earrings because they were distracting. I couldn’t believe that they asked me three times. I told them that I did not agree and that Mary loved the earrings. That’s how it was in those times. We were always challenged to change our authentic Black fashion choices. I always knew how to stand my ground on what I thought was beautiful.”

“This video was shot in Hawaii by Hype Williams. We were in the most beautiful remote locations and it felt like we were on the TV show Survivor. There were sharks in the water, exotic birds flying over our heads, and we shot on a mountaintop several feet away from a cliff that overlooked the ocean. All we had were walking sticks to help us.

“Mary’s turquoise-blue look was custom and inspired by the sound of the music and East Indian fashion. We made it our own. The marigold-yellow dress and jacket that she wears on the boat were both by Norma Kamali. All of the jewelry came from Indian bridal shops.”

“When I listen to music, I imagine a visual story, it just sort of comes to me in my head. And so when I say I come up with a look that complements the music, that sounds simple, right? But it's really not simple because I begin to imagine and get visions around the wardrobe. Hearing the music, the lyrics, the beat, the melodies, it inspires images and wardrobe for me.

“For ‘All That I Can Say,’ these were all custom looks inspired by a serendipitous fashion dream, from her nightgown and robe to her sequin cowboy hat with a matching pink corset dress. The legendary Nija Battle made her red-and-denim outfit with the mink halter top and mink jeans, and I made sure to always include hoop earrings.”