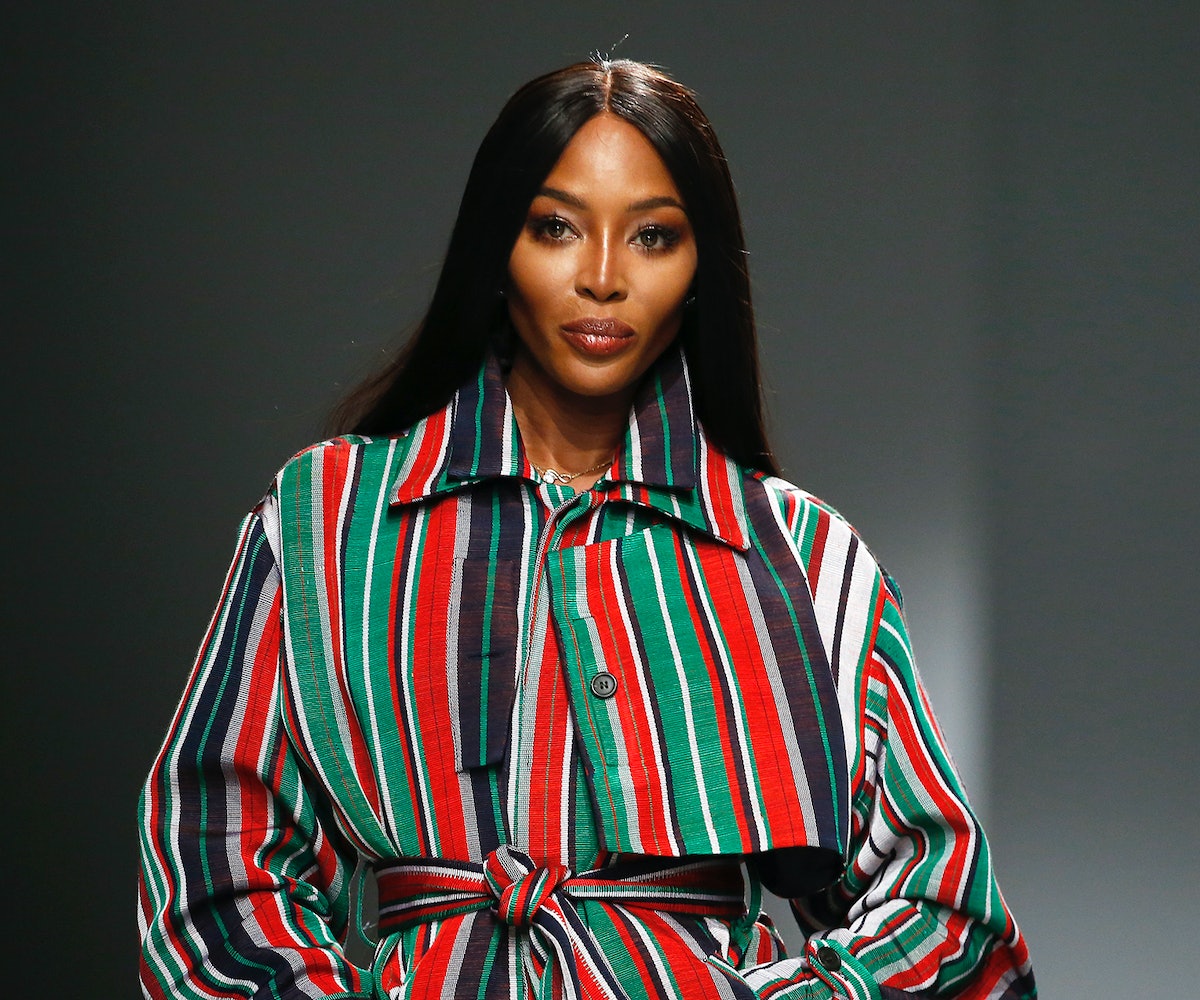 I've been put on hold several times while speaking with Naomi Campbell over the phone — it was clear that she was struggling while in quarantine at her New York City home. "Hold on, one second. What happened here?" she said to herself, along with some light banging of a then-unknown object in the background. The culprit of her distraction? "I don't know what happened to my juicer!" she said after the technical difficulty was resolved. (For those wondering, she was making celery juice.)

Amazon Prime Video's Making the Cut, created and hosted by Project Runway alums Heidi Klum and Tim Gunn, had premiered less than a week prior to our conversation. With Campbell as one of the judges, alongside Nicole Richie, French editor Carine Roitfeld, mega-influencer Chiara Ferragni, and designer Joseph Altuzarra, the series is the latest to join a growing group of reality fashion competition shows currently on view, including Netflix's Next in Fashion and the longtime, aforementioned Project Runway. (Rachel Zoe is also working on her own yet-unnamed competition show, though no updates have been provided since its announcement in 2019.)

But what sets Making the Cut apart from the rest is how high the stakes are and the exposure that comes with it: The contestants are experienced designers from all over the world competing for the grand prize of a mentorship to be the next global fashion brand, along with a $1 million reward. Challenges take place in Paris, New York City, and Tokyo. Plus, every winning look from each episode will be available for purchase directly on Amazon. But you better move fast after each one — last week's top designs are already sold out.

With two episodes dropping weekly every Friday, Campbell is already making a name for herself as one of the more entertaining judges to watch when it comes to her blunt fashion criticism. "I wasn't impressed with your outfits," said Campbell to Los Angeles-based contestant Jonny Cota, who designed an oversized cotton kimono for the second episode's couture challenge that, according to the supermodel, is something she would wear to the hairdresser's. "It was not inspiring. ... It's a respect toward the word 'couture.' You can envision it your way but you have to keep it at a certain level."

"I got my ass handed to me by Naomi Campbell," said Cota after the judges decided to keep him in the competition. "She's seen it all; she's done it all; she's worn it all, so read me. If you see the imperfection, read me. I don't care. I can handle it."

Below, we caught up with Campbell about her signature brutal honesty, her viral YouTube videos, and her quarantine routine.

What drew you to join Making the Cut as a judge?

Heidi is a friend and she asked me. I had said "no" originally because I didn't think I could commit that much time, but it wasn't that much time filming-wise, so I was able to change my mind and do it.

How was the experience compared to previous reality competition shows you've been on, like The Face?

There isn't much difference. At the end of the day, it's the same thing: You're trying to find the best and who's going to get that title and opportunity. I just love the creativity and seeing how they've interpreted [challenges] into their style. They've got a lot of things thrown at them and they've dealt with it. I like to see growth and I got to see growth. I love all of the places we're in: Paris, Tokyo — you couldn't ask for anything better — and New York. All of these highly creative places in the fashion business. That was a real treat. That's a dream, and a lot of the creatives don't start off in that way.

You've been praised for your honest critiques on Making the Cut so far. What's your approach to that? Have you ever felt like holding back?

There is no approach. I don't have a plan. That's just who I am. All that Naomi knows, that's how I'm going to speak. For me, whether the cameras are there or not, that's what I would say. It's not about reality TV; it's reality to me. It's someone's life in your hands that you have an opportunity to give a platform to and to show their creativity. You don't want to play with that. You want to be honest.

Your YouTube channel is getting a lot of attention, too, especially the video on your flight routine. Did you expect your videos to go so viral?

No, I didn't do it for [it to go viral]. It's what I've been doing for so many years and I just never showed it. My friend had never flown with me and she was like, "You do this all of the time?" And I was like, "Yep, for years." And then we filmed it, yes, with the intent of putting it on my channel. But all these years that have passed, never thought about it. For me, that's the way I've always flown.

Would you be open to a reality series on your life in the future?

People have been asking a lot of things in the last week or two. I don't know. I like the YouTube format because you get to own the content and I like it the way it is for right now.

Are you in New York City quarantining right now?

Yes, I am! You know what? I'm hanging with the New Yorkers! I am proud of being a New Yorker. And I love your governor! Governor Cuomo is bloody brilliant. Absolutely bravo, honest, he's great.

He's straight to the point.

That's how it needs to be! No bullsh*t.

What have you been doing while staying home?

I work out every day with my trainer [Joe Holder] live on Instagram at 12:15 p.m. ET. I'm doing different things with different friends. I cooked banana pudding for Ghetto Gastro's "Gastronomical Cribs." I'm just keeping myself busy; doing these meetings on Zoom. And I'm cleaning my house, which I am loving! [Laughs] I'm loving it. I'm loving to clean my own house.

What's your go-to outfit while working from home?

In the morning, it's workout clothes and then sweats and a T-shirt, and maybe a caftan after my bath. For me, I realized I have to have a routine. I'm sticking to a routine so I have something I can always look forward to.