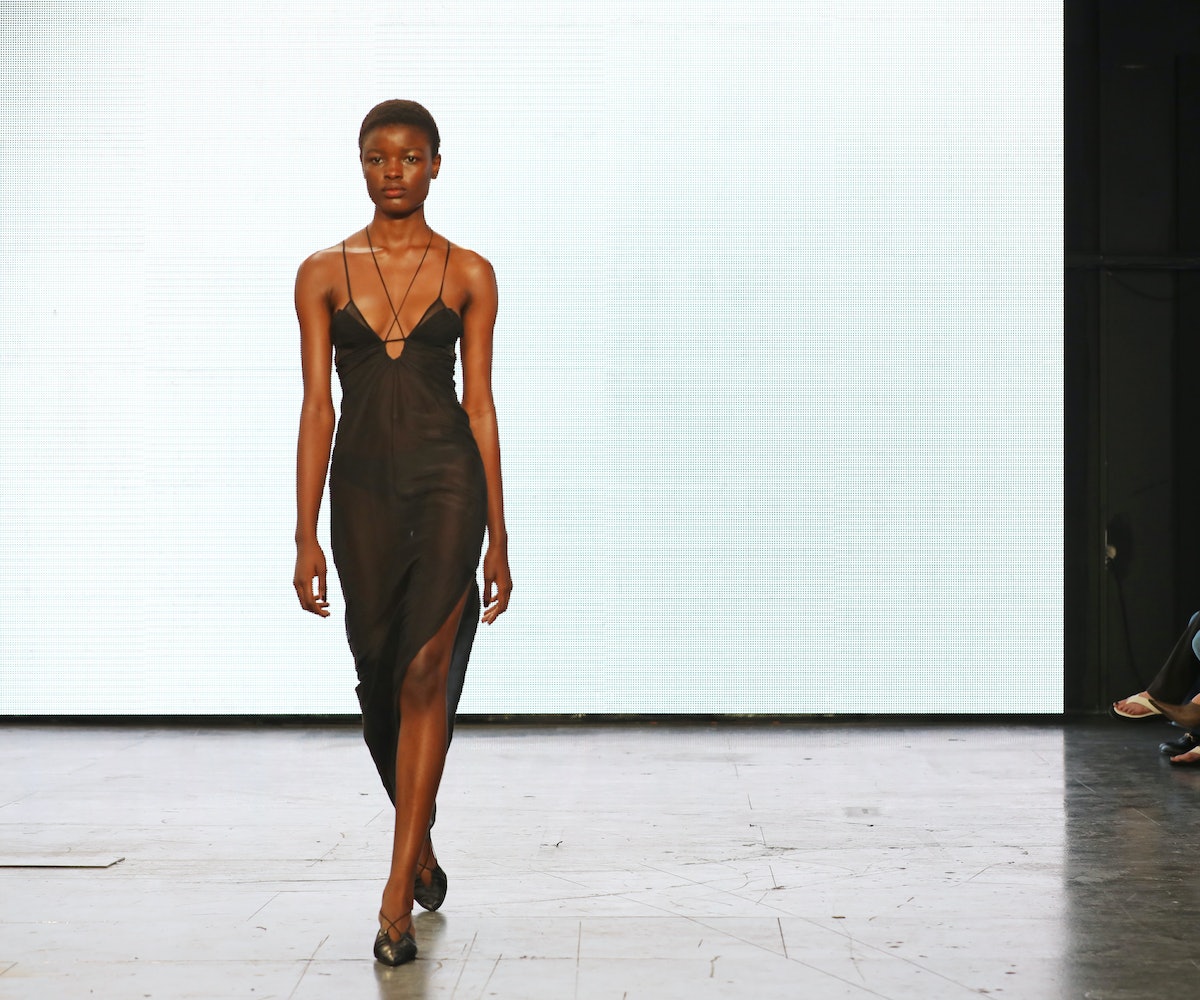 Nensi Dojaka thinks she’s seen pretty much every image from the ’90s now. The London-based Albanian designer has often drawn from the era in the creation of her wispy little party dresses that, beautiful and barely-there, first caught the eye of the fashion industry back in 2019 when they were shown in Central Saint Martins’ MA showcase in London.

“I actually had an image from the ’60s this time, which has nothing to do with my aesthetic,” explains Dojaka the day after her first solo London Fashion Week show, her Spring 2022 collection, which took place on Friday afternoon. “It was super random, but there was this flower detail that I really liked; maybe I should develop this.”

The graphic bloom appeared as a central motif on tights, stockings, and tailoring or as a clever twist of mesh across stomachs and thighs of her draped and deconstructed looks. Dojaka had wanted to expand upon her boudoir-esque offering, which she describes as “minimal but intricate,” adding something more casual and accessible. Tailored jackets provided a contrast to the very feminine and very delicate pieces: dresses pieced together from silk, tulle, organic georgette, organza, and lightweight wools.

Jean Campbell and Lindsey Wixson were among the models who took to the catwalk in the Old Selfridges Hotel show space just off Oxford Street in central London, with Sabrina Elba sitting front row. “[It was] more pressure than I thought after the LVMH Prize, but it was great,” recalls Dojaka of her independent sojourn. Previously, she had shown her collections via the talent incubator program Fashion East, whose alumni include Kim Jones, Simone Rocha, and Wales Bonner.

It was earlier in the month of September when the designer experienced another major career coup: scooping said 2021 LVMH Prize, a prestigious industry accolade — judged by Virgil Abloh, Jonathan Anderson, Maria Grazia Chiuri, Marc Jacobs, Kim Jones, and Stella McCartney, and from which she receives a 300,000-euro endowment. She describes winning as being “unexpected, emotional, a lot of feelings, even now.” And explains: “I’m trying not to be over-excited and, you know, keep my feet on the ground, take one step at a time because it’s very important to… you can fly too quick.”

Dojaka, whose namesake brand boasts such celebrity fans as Rihanna, Dua Lipa, Bella Hadid, and more, didn’t ever intend to become a fashion designer per se. “I was always drawing because my parents were sending me to drawing classes; that meant I was always doing some form of art,” she says. “But then when I did the foundation at Saint Martins, the tutors suggested that I study lingerie because I was always doing these tiny things.” Which is an apt description of her now signature dainty bra dresses.

She next went to London College of Fashion in 2013, where she would learn the technicalities of lingerie. It’s an element that makes her designs stand out, exacting in their fit and elegance. Sensuality, not sexuality, is a key word for Dojaka.

In 2017, she headed to Central Saint Martins for the MA. “They were completely different to be honest,” she says of the two fashion schools, which are both well-known for their own specialisms. It was the combination of the two that worked to provide the perfect grounding for what would become Dojaka’s eponymous label — even though, that too, was never originally on the cards.

“It was not so dreamy at first,” she says of her journey. Meaning it was more pragmatic than it was whimsical. Such was the success of her MA collection that Dojaka received orders from Montreal-based online retailer Ssense. The best way to fulfill them was to launch a label, for which she received support also from the British Fashion Council. “And then it just happened,” she explains. The designer was soon picked up by Fashion East, and her stockist list would continue to grow. “When you start something and you invest your soul in it, you just have to make it happen.” (On Monday, just a few days after her LVMH Prize win and her runway show in London, Ssense announced the release of an exclusive collection by the designer.)

It helps that Dojaka is nothing if not pragmatic herself. When I ask her about the newly revealed Spring 2022 collection, she’s already evaluating how it could be better, what she could improve, and what she’ll do next time. She thinks something was missing, maybe accessories (there would certainly be a huge demand for them). “I’m still taking one step at a time,” she says. “So, next season, maybe I’ll add only one new thing but not everything because it’s better to do it slow and right.”

She has also found a friend and confidante in the designer Alessandro Dell’Acqua, with whom a collaboration was recently announced. Dojaka will create a capsule collection interpreting his No.21 brand’s codes. “He’s just the nicest person,” she says. “I was always looking at his work and I was always following him, and then when he started writing to me, of course it felt really special.”

The pandemic, she says, has made her stronger professionally and personally. “I definitely feel like I’ve changed completely. I was shy, completely not confident, and now, I mean, I got through all of this, I can talk about it.”

That said, like most designers, she’s still not keen on having her picture taken or taking her bow at the end of the show — albeit to a whooping and cheering audience, who very clearly delighted in this debut.