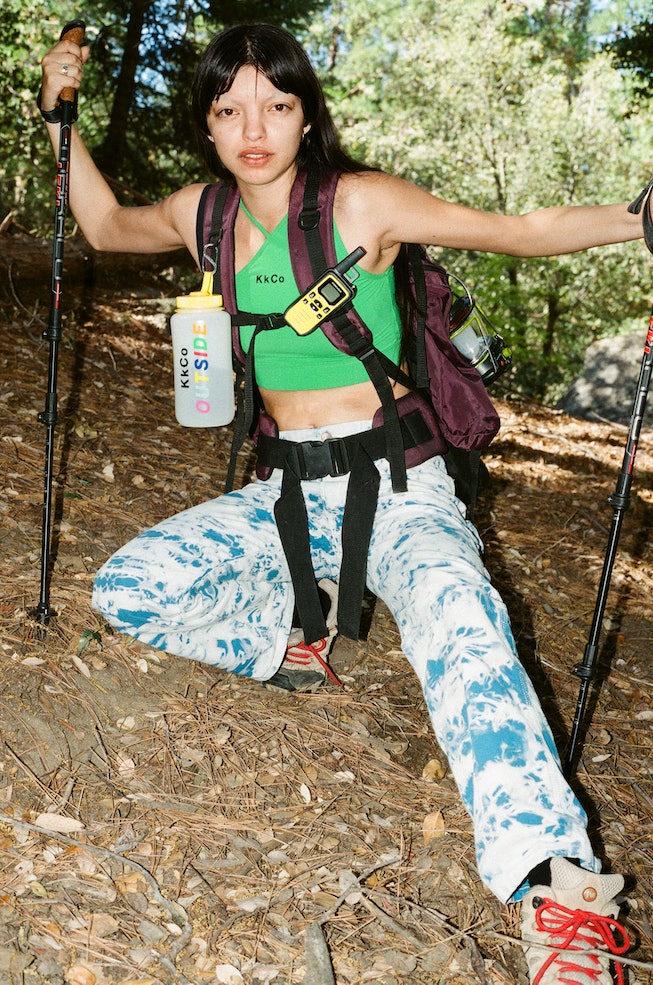 The world has changed since The Cut branded the term “gorpcore” back in 2017. As the Wall Street Journal men’s fashion editor puts it, gorpcore “represents the convergence of outdoorsy gear and more quotidian men’s fashion.” An example of the aesthetic is Frank Ocean’s outfit to a Louis Vuitton show in 2019, comprised of an Arc’teryx beanie and Mammut puffer paired with slim-fit jeans and a Céline by Phoebe Philo tote. When the pandemic hit, the outdoors served as the great escapist equalizer. We could hike away our troubles, jog away our bad thoughts, or replace our broken social lives with cycling into the sunset. With this rise, gorpcore’s aesthetic has evolved, and the outdoor industry, as well as new brands, are responding with a more inclusive and fashion-forward approach.

Everyone was using the outdoors to improve their mental health while being socially distant from others over the past two years. The proof of this massive lifestyle change across the country is in the data: In 2020 alone, the U.S. saw a 200% increase in trail usage, the activewear market accounted for 40% of all online sales, and activity participation in fitness, active recreation, and mindfulness suddenly accounted for over $367 billion in consumer spending.

Outdoor gear didn’t only appeal to national park dwellers anymore, but also to a new segment of consumers living in urban areas who needed to find accessible, close-to-home nature escapes. This created a need for technical outdoor gear to wear both in the woods and on the city streets. While gorpcore defined everyday active menswear back in 2017, it suddenly doesn’t do enough to encompass a streetwear-meets-outdoor gear aesthetic meant for all body types and genders.

According to a 2021 report by the Outdoor Industry Association, new outdoor participants are more likely to be female, younger, living in an urban area with a lower income bracket, as well as more ethnically diverse than preexisting participants. With 83% of the U.S. population living in urban areas, designers are tasked with creating a fresh take on traditional outdoor gear, while keeping today’s younger generation’s shopping values in mind: compatible cultural identification, a social stance, and inclusive design.

Noah Zagor, senior menswear strategist at WGSN, says that while outdoor gear traditionally tends to do best with men in their 30s and 40s — a 2019 Wonder report pegged white middle-aged males as the ideal outdoor gear shopper — an increasing number of younger urbanites have been romanticizing ideas of escaping out into nature. “Simultaneously, you have a long history of youth culture borrowing from and recontextualizing real functional outdoor gear and wearing it in the city streets,” Zagor tells NYLON.

Although accelerated by COVID, street fashion mixed with technical outdoor gear has been around since the ‘90s and draws influence from New York and Japanese street style. “The love affair between streetwear and outdoor gear goes back quite some time,” says Zagor, taking it all the way back to the surge of ‘90s East Coast boom-bap hip-hop. Serving as the soundtrack to the New York grime scene, 20-somethings wore clothing designed for protection, acting as armor in an urban jungle.

“The early ‘90s had kids buying Columbia Bugaboo ski jackets with the zip-out fleece liners and even full-on rain suits. Just a few years later, more expensive tech brands became hot. Take, for instance, The North Face Steep Tech jacket. Initially designed to be worn while skiing through the Alaskan backcountry, the high-priced style became a streetwear icon. Paired with either a pair of Timberland 40 Belows or its brown and green Field Boots, which became known in the streets as ‘Beef and Broccolis,’ and either a JanSport or The North Face backpack, the rugged NYC look was complete,” says Zagor.

The non-white origin story of street outdoor gear has had a full-circle moment, merging with the outdoor industry’s efforts to not only diversify its customer base but its designers, as well. Major brands, such as The North Face, have taken in-house diversity efforts with a goal for BIPOC to make up 25% of U.S. roles at a director level and above by 2030 and implement a Racial Equity Council to begin unconscious bias training.

Although it’s a start, Michael Kerr, the senior design director at Nobis, says while he’s worked with some of the biggest outdoor brands worldwide, when he goes into a design room or meets with design directors, he is usually the only person of color. “Brands are very willing to contract or collaborate with established POC influencers, designers, but I haven't seen enough of them bringing them on staff to adopt a new perspective,” he says. “As we hope to see more diverse design and creative teams, we'll get to see a more authentic interpretation of the outdoor industry and new perspectives on the outdoor experience.”

A good example of the evolution of inclusive street/outdoor apparel is embodied in Arc’teryx’s new line SYSTEM_A, which launched in August focusing on progressive style and minimalism. The launch only offers pieces in black, white, and neon yellow with boxier, looser fits that feel more androgynous.

Upon the drop of the new line, designer Jeremy Karl tweeted: “As one of very few Black designers in the outdoor space, imma extra shill my bags. Tomorrow the first collection of SYSTEM_A engineered by the experts at @Arcteryx is releasing. The fits are made for everyone, the pants are baggy. This is for us.”

SYSTEM_A marks an inflection point in inclusive outdoor gear that takes into account different body types and gender fluidity rather than just the traditional white male customer. Takanori Kasuga, creative director at Arc’teryx, tells NYLON that the goal of the line was to be a gateway to Arc’teryx’s larger brand. “System_A was created to introduce a new expression to the world of outdoor, and potentially inspire a new group of outdoor enthusiasts who aren’t currently being catered to in the industry,” he says. “At Arc’teryx, we’re known for premium technical products, and System_A is no different in that regard. Ultimately our goal with every product design is just to empower people to get out into nature, in whatever capacity that best suits them.”

On top of SYSTEM_A, Kasuga worked with Veilance to launch its women’s line in September in an attempt to make more feminine outdoor gear. This is a major push in recent years to expand the meaning of “gorpcore” to womenswear and appeal to the outdoor industry's growing and diverse audience. Throughout his career, Kasuga has noticed that there has been a changing awareness, in general, for different needs, from expanding size ranges to gender-neutral designs or greater representation in campaigns.

“We want to enable people in their outdoor pursuits by offering products that they want to wear and will be comfortable in,” says Kasuga. “SYSTEM_A was designed to be inclusive and versatile. It’s not about designing for one specific activity that has limits but designing a solution that transitions with people through their lives.”

Besides Arc’teryx’s SYSTEM_A and Veilance, smaller outdoor brands are also filling in the gaps while these major brands discover new audiences. “I think that as outdoor-wear finds its way into more daily wear, the space for brands to enter has opened up a lot,” says Kara Jubin, founder and designer at Los Angeles-based indie label KkCo. “In the past, you got your gear from the top brands, like The North Face, Arc’teryx, Mammut, etc. However, as the outdoors become more popular, there is more of a need for other perspectives.”

In August, Jubin launched a new outdoor-focused line, called KkCo OUTSIDE, in partnership with Urban Outfitters. The line centers on her relationship with the outdoors through genderless designs and inclusive sizing up to 4X. “Living in a major city, their connection with nature is one that is either sought out or created within the city. We created OUTSIDE with that in mind — it's built for backpacking trips to fishing at your local city park,” she says. “The outdoors is inclusive so the apparel should be, too… We hope to see this continue to grow as the brand grows. We also wanted to focus on keeping the prices accessible — something approachable for everyone to partake.”

These designers are evolving the definition of gorpcore to meet the needs of a changing industry. A space that was once dominated by white-male culture is finally evolving, adding more voices and looks to the mix to keep up with its expanding consumer base. Gorpcore isn’t reserved for menswear, but a more universal term including all genders and bodies.

“I think expansion of what the ‘outdoor industry’ is has been the biggest shift,” says Kasuga. “People should have freedom to experience the outdoors on their own terms, not in a narrow, outdated definition. The goal should always be to create room for experiences, not create more restrictions.”