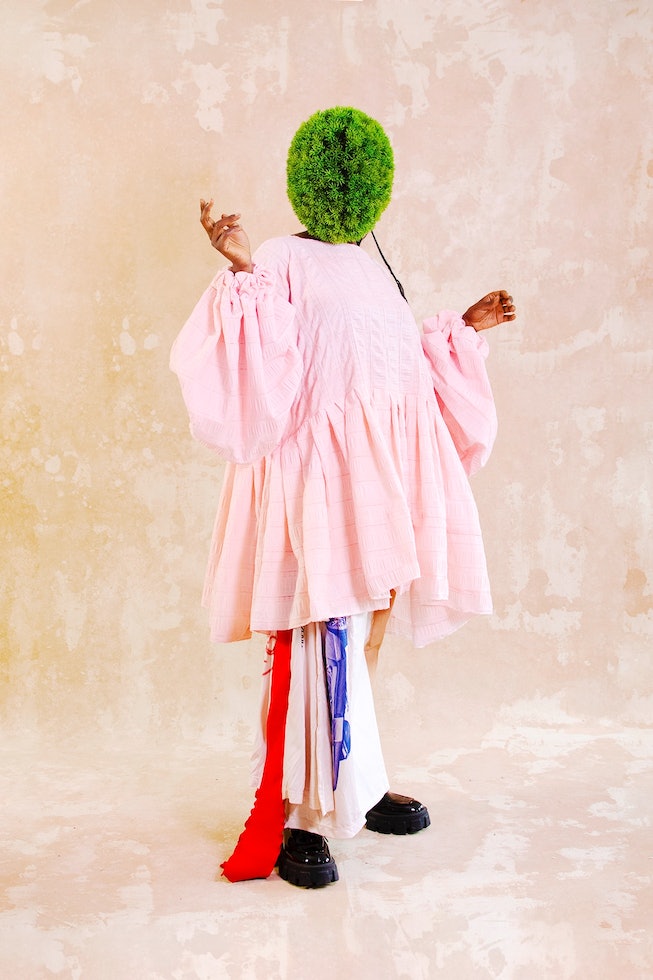 NaaAmerley Badger is in many ways just at the beginning of her fashion journey, but it’s already been an unusual one.

As creator of the brand Paulo Redeem, Badger recently won the first-ever Amiri Prize and landed a $100,000 grant — without any formal fashion training to her name. Rather than spending the last decade plus bending over a sewing machine or attending fashion school, Badger spent it working as a teacher, then as an assistant principal, in the public school system in Philadelphia.

She started her brand, which focuses on rescuing unwanted clothing and textiles and garments and turning them into new clothing, as a response to excess in her own closet.

“I had a lot of clothes, as many people do, and I was thinking about how I could maybe rework some of them versus just donating them,” Badger says in a phone interview. (It was a smart move from a sustainability standpoint, as much of the clothing we donate ends up in landfills.)

Badger started pinning things together, adding cargo pockets to a jacket or ruffles to a hoodie to create a handful of beautiful Frankenstein-style garments. She got help sewing the pieces together, received affirmation from a designer friend that the designs were something truly special, and before she knew it, Badger was creating a whole collection.

She spent the next two years of nights and weekends plugging away at the project while continuing her work as an educator during the day, before making the leap to quit her job to focus on Paulo Redeem full time in 2021. Moving to Mexico City to be nearer to potential production partners followed closely after.

“Two years ago I had this idea: What if I remixed clothes, using things that already exist to create something new? And now I’m at this place where I can actively do that,” she says. “I’ve been able to receive the support that I think I deserve. And that is going to allow me to express myself more creatively and to dream even bigger.”

We hopped on the phone to chat with Badger about her unique journey into the fashion industry, the rich history of Black sustainability, and more. Read on for highlights from our conversation.

What’s the story behind the name of the brand?

I was inspired by The Alchemist by Paulo Coelho; that’s why I selected Paulo. And then ‘redeem’ comes from this idea that the clothes are redeeming their impact on the earth, and we’re redeeming them by using them to make something else.

Where do you source the materials for your pieces?

I started the first collection with things from my own closet. By the second collection, people knew what I was doing and would say, ‘Hey, I’m clearing my closet out. Can I bring you some stuff?’ Now that I have an opportunity to scale the brand, I’m looking for opportunities to source more deadstock fabric.

How has being a fashion “outsider” impacted your experience?

I’ve had to teach myself, seek out information, and learn through community and relationships. I listen to a lot of The Cutting Room Floor; and that (plus MasterClasses, YouTube, etc.) has in many ways been my education. I think, if anything, it’s allowed me to really chart my own path.

What has it been like to shift from working as an assistant principal to a full-time fashion professional?

I really enjoyed my time as an educator, and in so many ways, young people inspired me to really believe in myself and take this work to the next level. At times, they saw things in me before I was able to see them in myself. And some of the models in my shoots were former students who were also interested in expressing themselves in this way.

I see this moment as an opportunity to shed past versions of myself — maybe the version of myself that was scared to quit my job because I wasn’t sure what was going to happen, or the version asking ‘How am I going to pay my bills, or how am I going to go into this industry in which I wasn’t educated?’ I don’t know a whole lot besides that it’s something that calls to me.

Often the narrative we tell about sustainable fashion is really whitewashed. How are you addressing that in your work?

When I think about sustainability, I think about growing up in a household where my mom would put the leftovers in a recycled container, or how I received hand-me-downs from my cousins. There’s a rich history of Black people practicing sustainability, whether it has to do with clothes, food, or how we support our communities. But when I Google ‘sustainable fashion,’ there’s a certain type of person that comes up, and that person doesn’t look like me.

Oftentimes the way that the sustainability movement has responded to those kinds of critiques is just to sort of swap in a Black model for a white one, without meaningfully changing the system. How might having actual Black leadership shift this?

In the past couple years, especially since the murder of George Floyd, there’s been so much performative activism. There’s been so many things that people said they would do, but now it seems like people just forgot about it. I do feel like I see more examples of Black folks in leadership, but I think it is also about looking beyond a person’s identity and not assuming that their identity means that they are actually thinking about liberation, or are thinking about how to exist outside the system that’s already in place. Because you can easily have a bad person and leadership who is just going to perpetuate the status quo.

What’s the main thing that you hope to accomplish with your brand?

I want to be able to express the depth and the extent to which I can create, and to be able to show that you can exist outside of the traditional models and pathways in fashion.

This interview has been edited for length and clarity.