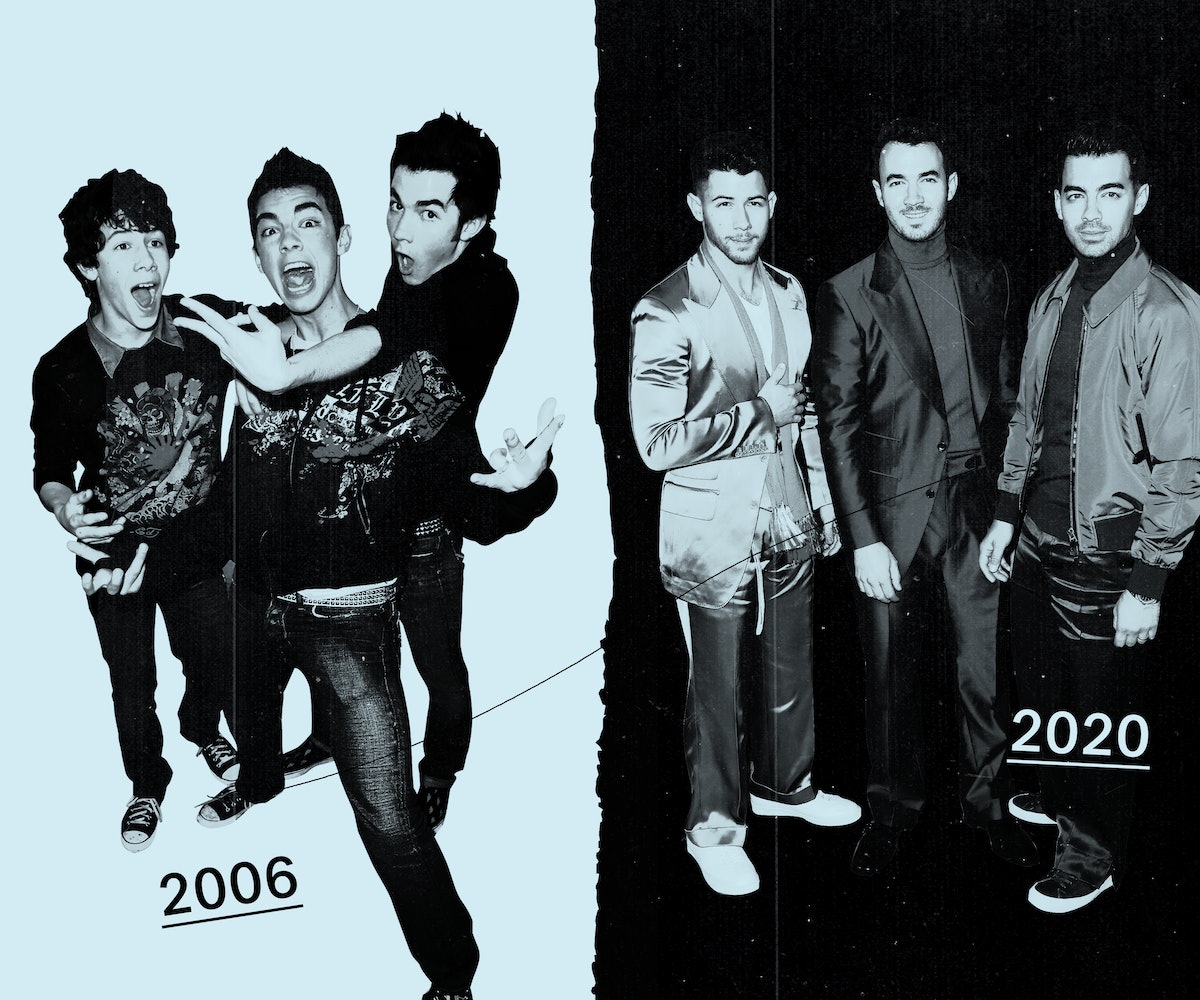 Then came "Gaslighter," the lead single off the trio's comeback album of the same name. Co-produced with reigning pop wunderkind Jack Antonoff, the track is slick and zippy, with a catchy chorus and a take-no-prisoners air of abandon.

"Gaslighter" is a reinvention, and with it comes a sparkly new creative direction: a new Instagram page, a new cover story of a glossy, legacy magazine, a new wardrobe. But it can't all be too new — it can't veer too far from the group's pre-established cult of personality, still potent after all these years. It must mark a resurgence, but it can't betray fans' nostalgia for Natalie Maines, Emily Strayer, and Martie Maguire and the ways they once made us feel.

The Dixie Chicks may be one of the most widely publicized musical reboots today, but they're certainly not alone. These types of comebacks span genres, from the saccharine boy-band bops of the Jonas Brothers, to the trailblazing hip-hop of Missy Elliott, to the sunny, 1970s folk-pop of Mandy Moore. My Chemical Romance, The Used, and the Backstreet Boys have announced or are currently undergoing reunion tours in 2020, too.

These returns to the studio, stage, and spotlight take expert planning — often over the span of many months or even years — and involve as many stakeholders, from managers to publicists to creative directors to, of course, wardrobe stylists. That fashion is one of the most powerful storytelling tools in any musician's arsenal isn't a new realization, but it's more complex with a reboot when you have emotions at play, and at stake. How do these artists most effectively dress for reinvention — to keep one foot in the past, while also adapting to and evolving for the future?

In a word: strategically.

"Fashion is how an artist is defining themselves — how they are not only relating to their fans, but relating to their community and a wider audience at large," says Nwaka Onwusa, director of curatorial affairs at the Rock & Roll Hall of Fame. "It's how artists stay relevant and tied to a culture, tied to a message. Some may not think that it's that deep, but fashion is part of the process for the people who help execute the visions for artists."

In Onwusa's work, she finds music and fashion to be two sides of the same coin. You can't do one without the other, particularly when there's that new vision to be imparted.

The Jonas Brothers are a successful case study in this regard. Those of us of a certain age may be familiar with their origin story: Brothers Kevin, Joe, and Nick Jonas first catapulted into teenybopper-adjacent fame in 2005 with "Please Be Mine," a very-mid-aughts, acoustic-backed ditty that sounds like it was specially created for the Laguna Beach soundtrack. Four studio albums, two Camp Rock movies, and eight concert tours later, the trio broke it off in 2013 citing "creative differences."

Fashion stylist Avo Yermagyan began working with Kevin, Joe, and Nick — he calls them "the Jonas guys" — on a magazine photo shoot a month before their split. He remembers finally feeling like he had gotten his big break, styling something of a pop megalith, only for it to dissipate four weeks later.

"Suddenly it was like, 'Just kidding, it's all over!'" he recalls. "In hindsight, it was the best possible circumstance and I wouldn’t want it to have happened any other way. I had the chance to work with each of the guys individually and develop their personal styles as they went off on their own ventures. To be able to work with them through those years, and again now as they’ve reunited, has been a gift."

Officially, the band reunited last spring. But in their not-insignificant six-year hiatus, they forged ahead on three disparate paths and Yermagyan was on hand for all of it.

Joe and Nick went solo, with Nick taking the tuxedo-clad heartthrob route and Joe linking up with a funky new dance-rock group, DNCE. (For the latter, Yermagyan was tasked to "go wild" with DNCE's styling, with the only rule being "no coloring within the lines.") Kevin became a full-time entrepreneur while simultaneously starting his family, and Yermagyan styled Kevin's eldest, Alena, for her first baby shoot.

Upon their reconciliation, the Jonas Brothers' music changed, and so too did their look. Joe began wearing funky Louis Vuitton on the same red carpets where he once wore ties and three-piece suits — to match his brothers, of course. Fans and followers reacclimated, and they even gained millions of new ones.

To stage their comeback, the Jonas Brothers needed to reintroduce themselves as, well, the Jonas Brothers, but the new-and-improved, mature-and-sophisticated, stylish-and-gutsy Jonas Brothers. They released "Sucker," the music video for which came complete with fresh-off-the-runway looks from New York fashion darling Prabal Gurung and Dubai-based designer Michael Cinco. Their wives (the "J Sisters") made appearances, too, wearing luxury labels like Elie Saab and Giambattista Valli, as well as cult-favorite names like Tomo Koizumi and Harris Reed.

"I intentionally veered toward choosing more polished looks to reflect their growth as men," notes Yermagyan. "I incorporated pieces from up-and-coming designers to keep looks fresh and of-the-moment. My goal was to start with a clean, new canvas and to capture the overall spirit of the new album, so that all the visuals that were rolled out conveyed the feeling of the new era — happy, joyful, and fun."

"Happy," "joyful," and "fun" are three adjectives one could very plausibly use to describe the original Jonas Brothers era, be it recreating Beyoncé's "Single Ladies" video or playing soccer with a Queen Elizabeth impersonator. Yermagyan tapped back into that essence not just because it would bring the group closer to their breezy boy-band roots, but also because it would allow fans to tap into their own nostalgia — nostalgia for the Jonas Brothers themselves, sure, but also for the lives they led when Kevin, Joe, and Nick were last Disney Channel regulars.

Nostalgia is a powerful resource, not a vice. Take the Backstreet Boys, which long ago crossed over from musical act to millennial heirloom, now the living embodiments of a generation's youth.

Tierney Burchett has worked as the Backstreet Boys' wardrobe stylist for a decade, first starting with the band as a stylist assistant at just 19 years old. When I speak with her for this piece, she’s accompanying the band on their DNA World Tour in Brazil, where the Backstreet Boys have three concert dates. (Said tour has since been postponed due to COVID-19 concerns.)

Unlike their colleagues 'NSYNC, the Backstreet Boys have been steadily serving up a drumbeat of new music for the last 24 years, since their self-titled debut album went platinum. Their latest and ninth record, DNA, came out last January, followed by a massive, 17-month global tour.

Burchett knows that part of the band's appeal is and will always be who they were in the late '90s, and how much that means to the thousands of people who still come out to their stadium shows. But that doesn't mean the group can't still be true to who they are, and what kind of music they’re making, today.

"Their fans are so devoted to them in every which way, and I think the reason is because [the Backstreet Boys] have stayed true to who they were then, which for some of these fans was the best time of their lives," she says. "They have this nostalgia that allows their fans to relive that period of time, and keeping that ‘90s-era style alive to any sort of degree possible plays a major role."

In that '90s-era, boy bands matched. Boyz II Men, Hanson, New Edition, 98 Degrees, O Town, B2K, LFO, Blackstreet… It's just what they did. The Backstreet Boys only cemented this with their iconic Millennium album art, featuring five variations of the same all-white outfit.

"It's a bit of a science finding a happy middle ground when we’re wanting to try new things, yet not steer away from what makes them, them," says Burchett. "As a boy band, coordination has always been a key factor in creating and giving off that boy-band vibe. One of the major components of new boy bands you see today is not coordinating. So with the guys’ reboot, I’ve been focusing more on trying to keep their styles less cohesive."

All of this is for the benefit of the fans. A band or musical artist can return to the spotlight wanting to take new approaches to their aesthetics, but they themselves can't escape the style of what once made them who they are.

"And I can't say I blame them," says Burchett. "Why fix what isn't broken, you know?"

For artists like the Dixie Chicks in the midst of a reboot after a decade and a half away, fashion enables them to tell whatever new story they want. The Dixie Chicks know they were right to follow their convictions, in the mid-aughts through to today. So maybe they want to make you feel that same way you did when you were listening to "Wide Open Spaces" in 1998. Maybe they're ready to be recognized today for what they were back then. And maybe it's as simple as they really just want to make new music again, the same kind of music you once put on in the car to cruise around with the windows rolled down on a warm summer night.

"All of the musicians we love are a part of our own past," says Yermagyan. "It's nice to be able to stir up those fond memories by intentionally weaving in visuals that honor that. But you have to maintain the delicate balance of old and new. You must show evolution, both in their music and in their style."