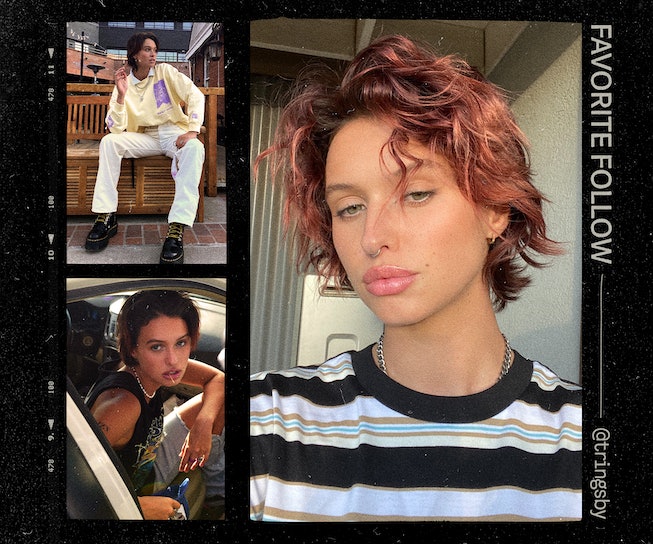 If you’ve been on TikTok, you’ve probably come across Tatiana Ringsby. The model-turned-content-creator first went viral on the video app in April 2020 when they came out to their parents with a cake. “Surprise I’m bi,” it said, and their reaction garnered 1.6M likes and more than 20.7K comments.

“I knew that they would be accepting, but it was such an amazing moment for me, and I think that video really resonated with people,” Ringsby tells NYLON over Zoom from their home in Maui, Hawaii. More than a year later, it’s still making waves, as users on TikTok are now tagging Ringsby in their own coming-out videos. “I would cry every time I saw those videos because I am actually making a difference. Whether it's being genderqueer, or wanting to change your pronouns. Just those types of things, people need to see people like themselves,” they add. “That was really validating for me as a queer person.”

While Ringsby’s following has quickly taken off in the past year, they’ve been sharing their world online for almost a decade, joining Instagram when as a teen in 2013 and then regularly posting YouTube videos through a collab channel. By 2015, they started their own channel, vlogging and posting about every aspect of their life — from beauty routines and makeup tutorials to their travels and working as a model.

Ringsby has always shared the struggles of their life, whether it’s being open about their eating disorder while modeling or answering followers’ questions on all things mental health, sexuality, and dating. But since coming out, their outlook on creating content is now rooted even more in authenticity. “I really felt free to be myself because I was like, OK, no more secrets. This is who I am,” says Ringsby. “Because before that, it was really just, ‘My life's so fun, and everything's so great!’ And that's not true. It's really important that, as influencers, we share these kinds of ups and downs.”

These days, you can find Ringsby’s presence all over the internet, from TikTok, YouTube, and Instagram to their newly launched podcast (called Skinny Dipping) and fashion line pronounced[tatchi].

“It's difficult to be authentic on social media... You just want to post your cute little outfit pics, and that type of stuff, which, obviously, I do that, too,” they explain. “But I think it's important to integrate some sort of normalcy. Be someone who people can be like, ‘Oh, this is just another human being.’ And we're vibing, we're friends, we're chatting. That's the content I want to create, and I feel like I'm creating that now.”

Below, Ringsby shares more about their personal style, ever-changing hair looks, launching a fashion brand, being vulnerable online and more.

On self-identity and personal style

“After I came out, I never realized how much my queerness was a part of me. How much of my person, my existence, is queer. It's not sexuality for me. This is who I am as a person. Self-expression is the most important thing to me. And so that's when my taste in fashion was really able to develop.

I'm very fluid with my gender and I want fashion to be something that's a really great way to express it. When I came out, I definitely started dressing more masculine and boyish, and that felt really, really good. That definitely pushed me in that direction for a while, dressing super masc and integrating different pieces that way. But I think it's just important to follow what feels good in fashion. Wear what makes you feel comfortable above all. The most important part is clothes are meant to dress us.”

On surfing and the “Coconut Girl” trend

“I grew up surfing, my whole family surfs. It's one of my deepest passions and just a really big part of who I am. I love the ocean so much, that's why I want to continue to do ocean conservation work. I've pulled a lot of my personal style from surf and skate culture. I've always found inspiration from surf, just because I'm in the community and always watching surf content.

I don't love ‘Coconut Girl’ the name, but I don't have another name for it either, so I can't knock it. I do think it's a cool aesthetic. I love the old Billabong and Roxy stuff, I've always loved that. But from the few videos I've seen on it, I think about how skaters must feel — I skate, but I'm not a skater — when people are copying their style, being like, ‘This is my aesthetic.’

I also love that it's not necessarily very feminine. Surfing is a very male-dominated sport, I'm literally always the only female-looking person out there, which is just so funny because I can get some waves but I also get completely overlooked. The aesthetic is a cool direction to move in, especially for summer. It's easy to wear and it also makes you fit the vibe.”

On sustainable fashion and launching a brand

“When I was doing a lot of e-commerce work, I was always shooting the new looks for Forever 21-type brands. I would go in and I would shoot 100, 200 new looks. And I'm like, ‘So what about the clothes from yesterday? Where are they going? A landfill?’ So I started researching the fast fashion industry and I was seriously horrified. With that and my coming out, and my love for environmentalism and fashion, all those things combined is pronounced[tatchi].

With a lot of fully sustainable brands, there aren't too many streetwear ones. A lot of them are catered to an older audience with a lot of neutral colors. It's very earthy. I wanted to do something that's sustainable, incredibly colorful, and fun. I just wanted to fill those little spaces in my own closet with gender-neutral pieces that were limited-edition. I don’t want it to be some big brand or anything.

I never went to college, and this has kind of been my college experience so far. I've learned so much about business and how so much goes into creating a brand. And it's really developed my appreciation for fashion to a whole other level. I've always loved it, but now I understand what goes into one T-shirt, or one hoodie, or one pair of socks. It's a lot of work, but it's so fun.”

On changing hairstyles and life milestones

“This past year has been a major period of self-exploration. I have a video on my YouTube about this, but with each hairstyle, it's kind of opened up another side of myself, and another possibility of who I am and who I can be. When I look back on my different hair colors, I think about that time in my life. It's really, really fun because I thrive with change, and I just really love to be pushed in new directions.

The thing is, I had long, brown hair for my entire life. It was part of my whole surf look. And then with modeling, I wasn't allowed to really cut it. So after modeling, I was like, ‘No one's going to tell me what to do with my hair? This is f*cking amazing!’ So I just started experimenting with it, and it was very queer of me to chop it all off. Then I went platinum blonde, and I could just do any color and it would wash out. Did I ruin my hair? Yes. Was it worth it? Yes. I've just been through a lot mentally, so that also reflects in my hair. As soon as I'm like, ‘Who am I?’ I would change my hair again.”

On being vulnerable and going viral online

“I was struggling at that moment, obviously. But I remember when I took that video, that once I was done crying and I was chill, I watched it and I was like, ‘This is the funniest sh*t I've ever seen.’ I was like, ‘One day I'm going to post this, and it's going to go viral.’ But I needed to cope with what was actually happening in my life first.

We just don't really see people putting themselves out there, and I was very visibly vulnerable in that video. Truly. And then with the Taylor Swift music going; it's comedic gold. I love that video. I'll watch it, and I'm just like, ‘What is this person doing? Are they OK?’ All the top comments are either, ‘How did you get this video of me?’ Or like, ‘What's going on here?’

There's been so many people that I've met randomly who were like, ‘Oh yeah, I saw that video of you.’ And I'm like, ‘Yeah, you and the rest of the world!’ When people have seen you like that, you can just be whoever you want. It doesn't matter. That's fun.”

On having the freedom to figure things out

“There are really good things about being an influencer, but I've been doing it since I was 13, and I've changed so much. It can be really difficult to change sometimes, because people hold you to this standard that you sort of placed on yourself. But also, people need to realize that this is a human being who's going to change, and evolve, and grow up. That was something I struggled with for a while. I was really struggling in my identity, and I felt like if I expressed it one way, then people would think that that was me. And I'm all over the place, as you can tell, but I think that's where I've found so much freedom. People now expect me to be all over the place, which gives me a lot more freedom as I continue to figure it out.”

NEXT UP
Life
Away’s Second Designer Collection Will Have You Traveling In Style
Life
On Repeat: Vaquera’s Away Collaboration Is Brought To You By Britney Spears B-Sides
Life
TikTok Toasts To Latinx Heritage Month & More Party Photos You Missed
Life
Joseph Osmundson on Virology, Monkeypox, Queer Intimacy