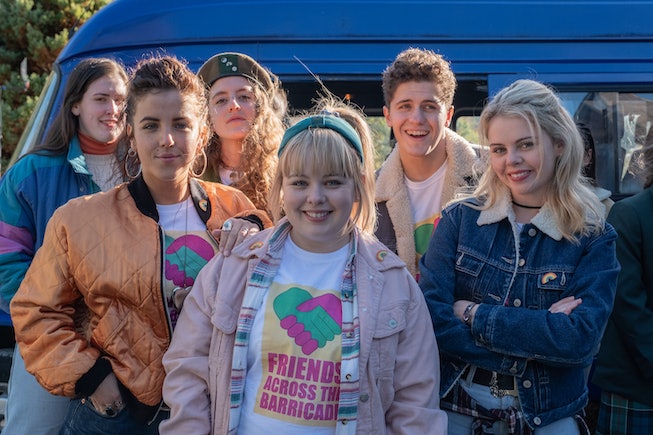 "Being a Derry Girl, well, it's a f*cking state of mind.” Wise words — and a requisite F-bomb — from the troublemaking but loyal and foul-mouthed to a fault Michelle (Jamie-Lee O’Donnell) in the Season 2 finale of the ‘90s-set teen comedy. In a rare display of emotion to her relentlessly mocked English transplant cousin, James (Dylan Llewellyn), she convinces him to stay in Northern Ireland with the rest of their found family: the tightly-wound, fast-talking Clare (Nicola Coughlan), as well as polar opposite cousins, Erin (Saoirse-Monica Jackson) and Orla (Louisa Harland).

The sentiment also applies to fans of the series, which is written and created by actual Derry girl Lisa McGee, who came of age in the Catholic-majority town of Londonderry during the height of The Troubles. As the series comes to a close with the long-awaited Season 3, premiering in the U.S. on Netflix on October 7, we’ve become attached to the irresistible characters and their moving journeys and hilarious misadventures. The nostalgia factor is almost a sixth Derry girl: The sounds of “We Like to Party” by Venga Boys or “Ready or Not” by Fugees'' immediately transport us back to formative moments, and Erin’s and Clare’s connecting “best friends” necklaces revisit our questionable teen fashion.

“If you can make people nostalgic, it's as good as making them laugh. They're on your side. They're like, ‘Oh! I remember that, and that, and so you want to just take people back with you,”

explains McGee, who actually wrote the series in a sort of method way: listening to ‘90s bops, while wearing scrunchies, doused in the era’s staple scent, The Body Shop’s White Musk.

True to the Derry Girls ethos, McGee enlisted her university friend Cathy Prior to design the nostalgic costumes for all three seasons. Prior, who meticulously studied the era’s fashion and music magazines, like Smash Hits, for style inspo, also made a point to rent or thrift authentic ‘90s pieces for the wardrobes. “There was a real ethical part of my design,” says Prior.

Prior also recycled some meaningful ‘90s fashion for the show’s final run. “By Season 3, you feel at home with them all,” says Prior. “The costumes are so important to make that feel real, and feel at home, so I incorporated pieces over all three seasons into the last season, just for that.” Keep an eye out for Clare’s teddy bear earmuffs from that school field trip when the Catholic girls try and mostly fail to connect (in more ways than one, ahem Michelle) with the Protestant boys. Their “Friends Across the Barricades” T-shirts also resurface in the lead-up to a pretty epic musical tribute that even makes cynical Sister Michael (Siobhan McSweeney) break into the world’s tiniest grin.

See which other ‘90s-fashion Easter eggs (hint: James’ very English printed PJs) you’ll spot in the finale season, and enjoy some behind-the-scenes memories with McGee and Prior, below.

“We talked about the Spice Girls a lot,” says McGee, who, with Prior, assigned each character their “own individual style” highlighting their personalities.

Self-serious (and self-unaware) Erin’s on-point cardigans, miniskirts, and layered vests — or waistcoats, in Irish — reflect her mood and aspiration of the moment. “When she's becoming ‘the writer’ in school, she has that cream silk shirt with the little tank top over it, and it's a real idea of herself as ‘a writer,’” explains Prior. While accused craic killer and “goody two shoes” Clare stays prim in “dungaree” or overall dresses, floral shirts, and a pastel palette. “Lisa had written Clare as ‘shite the tights,’” laughs Prior.

Michelle talks a big game about her sexual prowess, but is still tentative — like when she considers losing “the rest” of her virginity in season one. So, Prior juxtaposed the tough talker’s football jerseys and sporty biker shorts with over-the-knee socks, which provide coverage and hint at her vulnerability. Plus, “I used to wear Michelle's over-the-knee socks,” says McGee.

Orla, Derry’s resident aerobiciser, literally marches to the beat of her own drum in “trackies,” and exhibits her unflappable quirkiness through “dressing for the occasion,” per Prior. (Orla’s Life Aquatic-esque snorkeling outfit to the coast in Season 3 is actually the top half of her beloved Grandpa Joe’s surfing wetsuit.) Now officially a Derry Girl, James rolls out a collection of Derry City sports merch to finish out the show.

BUT THEY ALSO SPICE IT UP (SORRY)

Speaking of Ginger, Scary et al, in the finale season, the girls make their stage debut in the Our Lady Immaculate’s Children In Need talent show, hosted by devout ride (and James’ hair icon) Father Peter (Art Campion). “I just felt Erin would definitely be Geri because Geri was the self-proclaimed leader and the one that was always speaking on behalf of them,” explains McGee, in assigning each a Spice persona. “[As Scary], Michelle's kind of terrifying and very sexy. Clare's quite goody-goody, so she'd be Baby and then Orla's just very Sporty Spice: very into her dancing and her routines.”

“James always felt like Posh because Posh is a wee bit different,” continues McGee. “Also, she's English. That's sort of fancy, you know, like posh.” So, James stunts in a version of Victoria Beckham’s signature 1997 high street LBD. Lewellyn also fully committed to James’ Posh makeover, especially the three-inch heels. “I remember saying to him, ‘Darlin’, you don't have to wear those. You can put it on trainers.’ Because they have to do the routine like 100 times,” says McGee. “And he was like, ‘No, I'm wearing them. I'm wearing the heels.’”

EVEN THEIR SCHOOL UNIFORMS ARE UNIQUE AND PERSONALIZED

Our Lady Immaculate secondary all-girls (and one honorary “wee English fella”) school is based on McGee’s actual alma mater, Thornhill College. McGee explains that the fictional and real uniforms share a crest, motto and color scheme. Prior heavily researched the history of tartans to land on a navy and green (and politically neutral) Colquhoun plaid and custom-designed the collegiate layers.

Also as in real life, teens find a way to express themselves even in uniform. “Clare was always fully pristine and precise with every piece of school clothing. James was quite English in that his was always correct, too,” says Prior. “Erin changed a bit, depending on what her mood was — and what she was doing.” At one point, Erin wears a writerly scarf (also like Cary and his Moleskin in The Other Two.) On-the-go Orla ties her regulation sweater and scarf around her waist, while rebel Michelle flouts nun rules with large hoop earrings and skirt that's definitely more than three inches above the knee. “We actually made her skirt look like it was turned up three times,” says Prior, who manipulated lining fabric to mimic the age-old DIY trick without the actual bulkiness.

McGee actually looks back fondly on the democratizing uniforms, but like Erin, once attempted to “express my individuality,” as the teen declares, by switching out her blazer for a denim jacket. “That didn't [last] for more than that one morning when I got off the bus and a nun went, ‘no,’” laughs McGee, as I picture Sister Michael shutting that down immediately with her trademark glare.

Always full of surprises, Sister Michael, who ranks black belt in judo, devoutly prays for Ireland football wins and hates the French, has a deep seated obsession with another genre that she incorporates into her wardrobe. Because Sister Michael sports sassy bolo ties with her weekend nun ‘fits — like when she encountered the girls on their odyssey to see British boyband Take That in Belfast. Or as she exasperatingly waits next to a perpetually nervous Clare, left behind at the train station, while being forced to listen to an oversharing ticket agent.

“There was a line that Lisa had written in season one about Sister Michael watching [the Clint Eastwood TV series] Rawhide,” says Prior, who began incorporating a “cowboy” theme into the nun’s costumes. Prior and McSweeney concocted a whole backstory for Sister Michael’s off-hours activities, as also illustrated through Western fringe stitched onto the back of a shirt, a top with a horse motif and cowboy boots under her modest skirts. “By season three, [McSweeney and I] were saying, Sister Michael’s probably going line dancing or to cowboy conventions or something,” says Prior.

THEY PUT A DERRY ‘SPIN’ ON AMERICAN TV STYLE

Like Michelle taking inspiration for expletive-laden slang after watching 1994’s Pulp Fiction, McGee grew up in Derry watching American TV shows, like Fresh Prince of Bel-Air, Beverly Hills, 90210, and My So Called Life. “We were obsessed with America and the shows and wanting to look like those kids,” says McGee. “We definitely wanted to incorporate that into the show, but put our own spin on it. So it always looks slightly shit.”

“It was a really important social commentary for Lisa to make,” says Prior, about Clare coming out as the “wee lesbian” through an essay in the school newspaper edited, via near-coup, by Erin — and disseminated to the students against the edict of undercover reverse psychologist Sister Michael.

McGee and Prior discussed a way for the besties to visually show support for Clare beginning in Season 2, and came up with the rainbow pins. Prior then ensured that the group wore the pride paraphernalia on their uniforms and off-duty outfits all the way through to the series finale. (Sister Michael even wears one to champion Clare in the moving second to last episode.) “By Season 3, we were having like ‘love is love’ [pins] and we went all out,” says Prior.

The pins aren’t just immortalized in our Netflix queue, but in the real town of Derry through 20-foot high street art of the fab five. “The rainbow pins are on that mural,” says McGee. “So you have that symbol in the center of town.”

THEIR ANGELIC HALLOWEEN COSTUMES WERE CUSTOM-DESIGNED

After their adventures to see Take That in season one, it's only right for the girls to score VIP access to a Fatboy Slim (or “Slimboy Fat,” per Ma Mary) rave in the penultimate episode. The DJ’s cameo also tracks how much the public’s and the girls’ tastes have evolved into 1997 — a year before the Good Friday Agreement heralding peace in Northern Ireland. “It was a real chance to be very vibrant and colorful. His music felt so new at that time. They've been really interested in boy bands before that, and now they're interested in dance music,” explains McGee, also pointing out that Halloween in Derry is a massive blow-out celebration.

Of course, Derry Girls is also a comedy about being a misunderstood teen. So, while Erin envisions “angels,” of the likes of the Baz Luhrman-directed (and Kym Barrett-costume designed) 1996 fashion fantasy Romeo + Juliet, all the adults seem to think they’re dressed as a flock of swans. “The 'swangels' as we called them,” says Prior, who custom-designed the hand-made and hand-feathered wings — trimmed with rave-friendly lighting — to match how each character would put their costume together.

“Erin has the stereotypical, perfect angel wings,” says Prior. Orla wears her wings attached to her sleeves to excitedly flap, while James goes all out with a regal (and English) Elizabethan ruff collar. Clare’s set attaches to the back of her dungaree dress, and over a rainbow collar t-shirt to meet her record store crush. Michelle parties in short-shorts and custom-feathered rainbow over-the-knee socks — and repeats the lace mock-neck top she wore to Take That, which is pretty class.