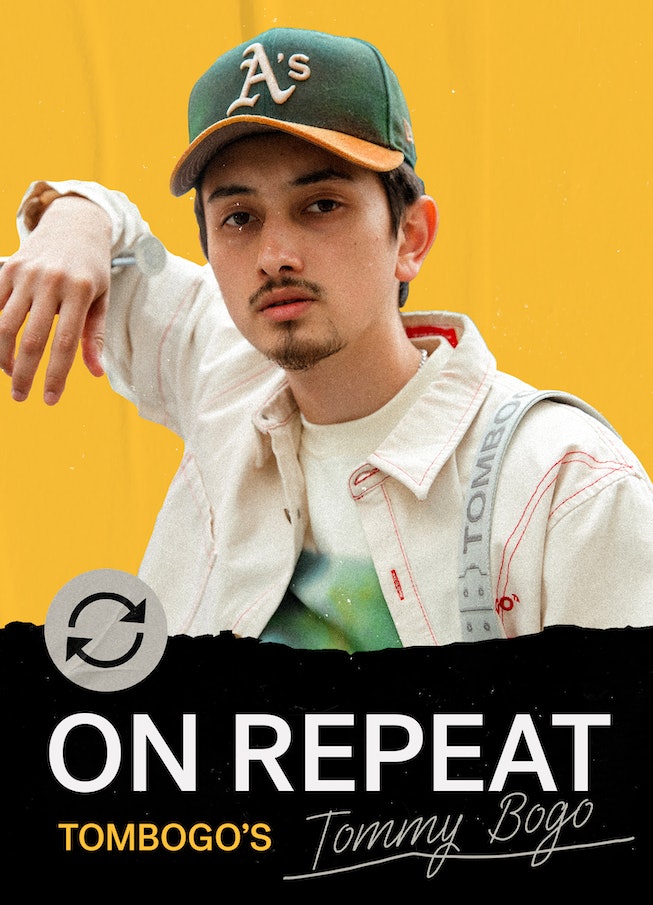 It may be Los Angeles designer Tommy Bogo’s first-ever runway show this season, but his brand Tombogo is already a label to watch on the New York Fashion Week calendar. After making its digital debut in February of this year, Tombogo’s Spring 2022 collection was presented with an in-person presentation on Friday, Sept. 10, set against an original musical score created by Bogo himself in collaboration with Oakland artist Elujay.

“Music plays a very unique role in telling the story of my designs and collections,” Bogo tells NYLON. “I’ve been able to use New York Fashion Week as an outlet to illustrate this. My Fall 2021 show, ‘Lost & Found,’ as well as my Spring 2022 show, ‘Nature Is Healing,’ both feature original music that I’ve made to further inform my collections.”

The soundtrack amplified Bogo’s inspiration — the silhouettes found in nature — and his own research into more sustainable practices as a designer. Tombogo’s new collection included recycled materials, vegan leather, and different ways to explore getting dressed, whether that’s a new layering technique or clothing with convertible functionalities.

“By simultaneously designing collections and producing original music, I am able to create bodies of work that compliment each other and make for a much more cohesive and emotional experience,” he adds.

Ahead, Bogo shared the latest songs that he loves to listen to, both for work and pleasure, for NYLON’s latest edition of On Repeat.

“Elujay is not only one of my favorite artists, but a longtime friend I’ve known since high school. We collaborated on the runway score and soundtrack for the Spring 2022 collection presentation at NYFW. He also produced all the songs that I have vocals on this season. ‘Frequently’ is one of his more recent songs in anticipation of his album that he’s working on, which is sounding incredible.”

“This is probably the hottest song out of the Bay right now. Being from the Bay Area, I slap this on the daily — not just because it’s a good song, but also as motivation and a reminder of the unique energy that folks from the Bay emit.”

“Just For Me” - PinkPantheress

“I just like this song. It’s super catchy and PinkPantheress has been having an amazing year. I’d include all her songs on this list if I could.”

“A classic. I play this song while designing with a nostalgic approach.”

“Phabo is the homie (pun intended). His whole project that he recently dropped is amazing. Definitely an ‘in your feels song’ so this one gets played when I’m in that mood.”

“Blxst is one of the most fire L.A. artists out there. This song reminds me of both my time moving to L.A. and also not letting this new environment get to my head.”

“Heavy vibes. I love all of Tems’s music. Lyrically, I guess I associate this song with leaving bad or unwanted energy in the past. There’s a tone of optimism in the song that helps me look forward instead of backwards.”

“The chord changes in this song are amazing to me. This track also brings me back to a really special weekend that I spent with a significant other.”

“The first song I ever released. It’s the soundtrack to my Fall 2021 collection ‘Lost & Found,’ which was also my NYFW debut.”