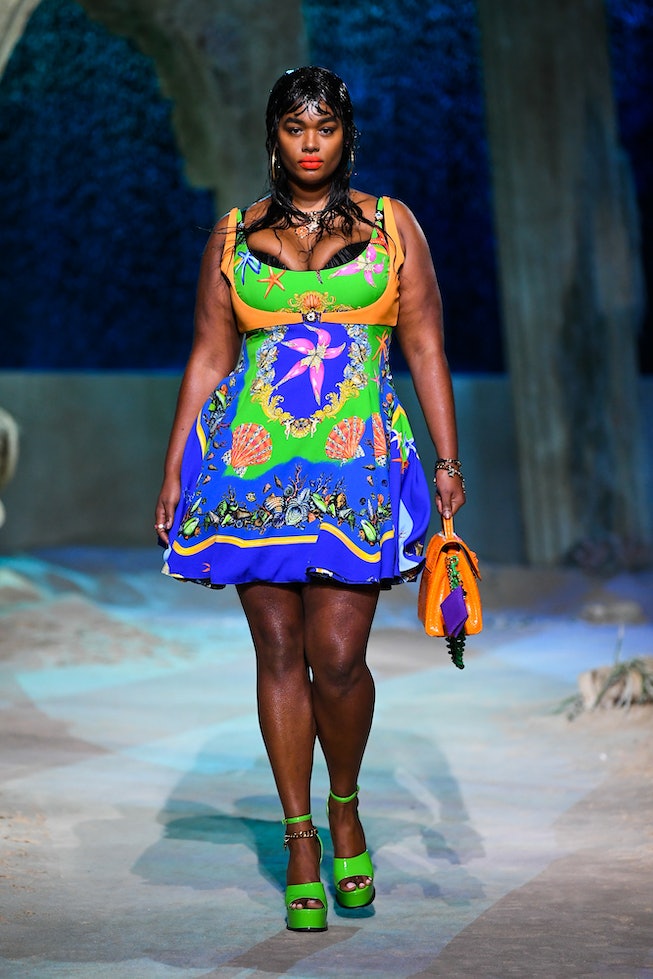 After walking in the luxury brand's fashion show during Milan Fashion Week in September, Precious Lee is now the newest face for Versace's Spring 2021 campaign. Lee, wearing the same vibrant mini dress she wore during the runway show, stars alongside Hailey Bieber and Kendall Jenner.

"With these images I wanted to portray the modern Medusa. Or better, to highlight how her many faces can be drastically different from one another and every woman can actually be Medusa," said Donatella Versace in an official statement. "All of us, with our differences and unique characters, we can express ourselves also in the way we decide to dress. The same thing is true for me, of course. We live in a world in which gender differences are no longer important and we have been given a kind of freedom like never before. Let's use it and use it well!"

Lee, who's already photographed for Sports Illustrated and Lane Bryant’s #PlusIsEqual, was one of the first plus-size models casted for Versace's Spring 2021 runway show, in addition to Jill Kortleve and Alva Claire. Not only was it a major milestone for the Italian fashion house, it was also was Lee's debut runway show in Milan. She spoke about the important role she holds in the fashion industry during an interview last year.

"I came into this industry to uplift and inspire. So, doing projects that create more space for people to be themselves and feel good about it is the goal," she told Fashion magazine. "Breaking ceilings is extremely important to me because I know that I am capable. I want people to know that this world is for everybody."

Take a look at Lee in Versace's Spring 2021 campaign, below.