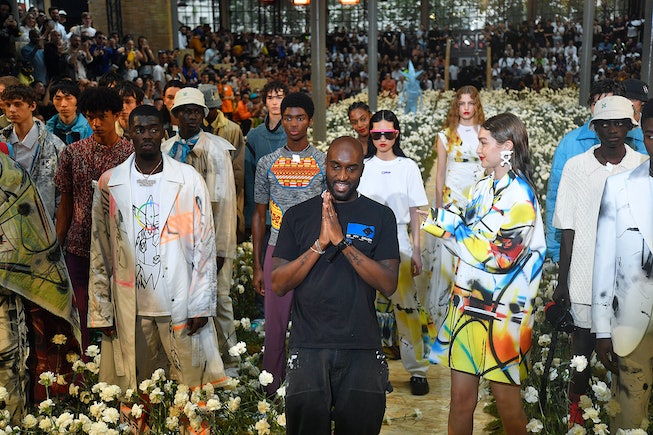 Editor’s Note: T​his article was updated from its original version to include Virgil Abloh's new statement.

As protests continued across the country over the weekend, many were looking at designers and fashion brands on how they were responding and, more importantly, acting during this time. Nike and Adidas were two of the first, joining together to release a statement denouncing racism.

Other responses to the protests, however, were met with disappointment from fans and, essentially, the entire internet. Off-White and Louis Vuitton designer Virgil Abloh, in particular, was met with criticism for his posts on Instagram, where he denounced the looting of the streetwear resale store Round Two, owned by Sean Wotherspoon, in Los Angeles.

"Case & point why I said 'streetwear' is dead…" he wrote on Instagram stories along with a photo of the Supreme storefront. "Streetwear is a group of friends that I'm surely was like 'C'mon guys, this is Sean [Wotherspoon]'s store, we can't treat him like this, we know Sean.' Streetwear is is a culture. 'Streetwear' is a commodity. 'Streetwear' is I need this t-shirt or pairs of shoes….by any means necessary…."

Abloh faced more backlash after posting a screenshot on social media of his matched $50 donation. "The Miami community, I’m crazy inspired. For kids in the streets that need a bail funds for George Floyd protests," he wrote.

People were quick to point out the high prices of Abloh's Off-White items, which frequently sell out.

"You literally can't even get off-white socks for 50 dollars," Josh Edwards tweeted. You can currently buy a pair of Off-White socks at a discounted price of $63.

Model Duckie Thot, who earlier this weekend called out the fashion industry for its lack of support and asked her followers to "apply pressure," commented on Abloh's response tweeting, "VIRGIL!!! HOW DARE YOU."

"If y'all are going to run up on anything today, let it be LV and Off-White," she continued. "He needs to personally feel it." We reached out to representatives for Off-White on comment from Abloh, but have yet to receive a response.

After releasing, then rescinding, a statement to the New York Times on Monday, Abloh turned to the tried-and-trued Notes app to deliver his explanation and apology.

"I apologize that my comments yesterday appeared as if my main concerns are anything other than full solidarity with the movements against police violence, racism, and inequality," he said in the lengthy post. "I want to update all systems that don't address our current needs. It has been my personal MO in every realm I touch."

Bobby Hundreds, co-founder of streetwear brand The Hundreds, posted a photo of his Los Angeles store after it had been looted and destroyed, acknowledging the feelings of protestors and offering them support.

"I grew up here. We found our community here. We established our brand here. So, this is emotionally very difficult to watch and process. But, I am not angry about the devastation. When commenters ask how I can condone rioting and looting, I categorically do not," he wrote. "Yet, I am not surprised. When people ask why I’m not upset that my business is impacted or my neighborhood pillaged, I tell them that my disgust over injustices in this country eclipses any other temporary feeling. Don’t ever stop protesting."

Outside of streetwear, Dolls Kills founder Shoddy Lynn was called out by Elijah Daniel for posting a photo of police protecting her L.A. storefront. She wrote, "Direct action in its glory," adding the Black Lives Matter hashtag. She's since made her account private.

"Hi everyone, meet Shoddy Lynn, the owner of @DollsKill, praising the police for shooting peaceful protestors outside her store," Daniel wrote. "Do not ever shop there again. Do not even accept a brand deal from them again. Take a fucking stand." A comment on Lynn's post also clarified that the caption was the title of activist and journalist L.A. Kauffman's book Direct Action: Protest and the Reinvention of American Radicalism.

The world of luxury has been notably quiet since the protests have started. High-end stores like Chanel, Louis Vuitton, Dior, and Marc Jacobs (among others) have been destroyed and looted across the country. Few designers and brands have spoken out to offer support to the protesters, with one exception being Jacobs.

"NEVER let them convince you that broken glass or property is violence," Jacobs wrote on instagram. "Property can be replaced. Human lives CANNOT."

Marc Jacobs, the brand, also posted a photo on social media of its Los Angeles flagship store with its logo crossed out and replaced with the names of Sandra Bland and George Floyd, two Black individuals who have died because of racial violence from police.

"A life cannot be replaced. Black Lives Matter," noted the brand's caption on both Instagram and Twitter.