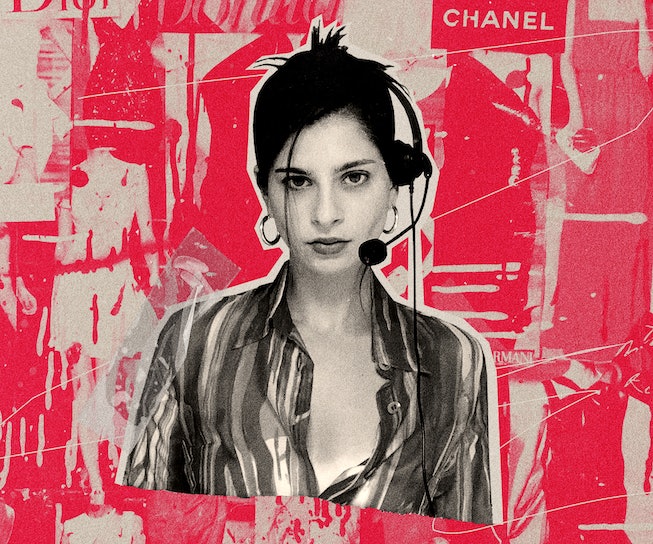 Puzzles, sourdough starters, plant hoarding, staring at your closet with overwhelming dread. These have become the passion projects of millions during the COVID-19 pandemic. Vogue writer Liana Satenstein has found a way to assist with one of these, streaming her conversations with everyone from fashion designers to influencers as they dissect the never-worn pieces taking up real estate in their closets.

“When you go into someone’s closet, even if I didn't know them, I learned all these intimate details about them. It could be about personal life, who they dated, weight gain, weight loss, jobs that they’ve had, all this weird information that I never would have known through these people,” Satenstein tells NYLON. “It feels really personal and intimate. Sometimes I’d be with these people three or four times in a row. So you really get to know someone in that time going through all their schmattas.”

Word-of-mouth travels quickly, but in fashion, it could break the sound barrier. As Satenstein continued to sort through her clients’ sartorial possessions, she began taking stock of her own closet, posting videos of her own never-worn items and how-tos for first-time wardrobe purgers. With a nudge from friends and the discovery of her dad’s old headset, she hosted the first official #NeverWorns interview with The Zoe Report’s Senior Fashion Editor Aemilia Madden in December 2020.

In the months since then, #NeverWorns has hosted a motley crew of guests both in and outside the fashion industry, including Susan Alexandra, Chrissy Ford, Heidi Gardner, and Devon Lee Carlson with a special appearance by Miley Cyrus.

“I look for personal style and what they do. The thing that I like about #NeverWorns, how I'm trying to grow it, is I really wanna get different people on it,” Satenstein says. “People who are more behind-the-scenes, like fashion people who do archive work, maybe casting directors. The influencing world, because I actually find that very fascinating. What do they buy? They get sent so much stuff. What do they actually prize in their wardrobe? Even actresses and non-direct fashion people who have an interesting point of view. Maybe it's not my own favorite look, but they have a point of view and they have interesting items.”

So, who are Satenstein’s vision board guests she hopes will one day sit opposite of the headset?

“Lil’ Kim. Of course, J.Lo. Isaac Mizrahi and Fran Drescher,” she said. “Whoopi Goldberg. She has a killer wardrobe. Please add Dolly [Parton] in there, too.”

The shrink element of Schmatta Shrink often comes into play when Satenstein deconstructs a closet. Not unlike a therapist on Hoarders, Satenstein has learned the emotional triggers that result in people holding onto pieces they’ve never worn, and, most likely, will never wear. As the daughter of an antique dealer, she spent her childhood hopping around Massachusetts with her mother sifting through strangers’ possessions at estate and garage sales, an informal training that’s given her an honorary doctorate in unbiased closet cleaning.

“People being ‘dickmatized’ by the labels. I've seen this a lot. I had one guest on, Brynn Waller, girl about town, Brynn. Her thing is she goes into a secondhand store and she'll find a Ferragamo shoe or something that's a little bit too small, but she’ll buy it anyway because it’s Ferragamo,” she says. “There's a lot of sentimental feelings tied up in clothing. That's a whole separate sort of section on its own. People just have a lot of sentimental feeling, so they don't get rid of it.”

The pandemic has resulted in a surge of secondhand sales, the result of millions of people who have been forced to confront the spillover in their closets by government-mandated shutdowns. Retailers like Vestiaire Collective and Mercari have reported staggering growth in secondhand sales during 2020, while big-name department stores like Neiman Marcus and J.C. Penney filed for bankruptcy. Cleaning out your closet has never been more on-trend, and Satenstein is poised to ride the wave until it breaks. The future of #NeverWorns is neon bright, with bigger names and even possible retail partnerships on deck.

If there has been one good thing to come from the year-long global pandemic, it’s the lit fuse of creativity. Shakespeare may have written King Lear during the plague, but could he have become a viral sensation with his political impressions or secured a deal with Showtime? Could he hold a 45-minute Instagram Live conversation with an influencer/phone-case magnate on her fashion wares? Seems unlikely.