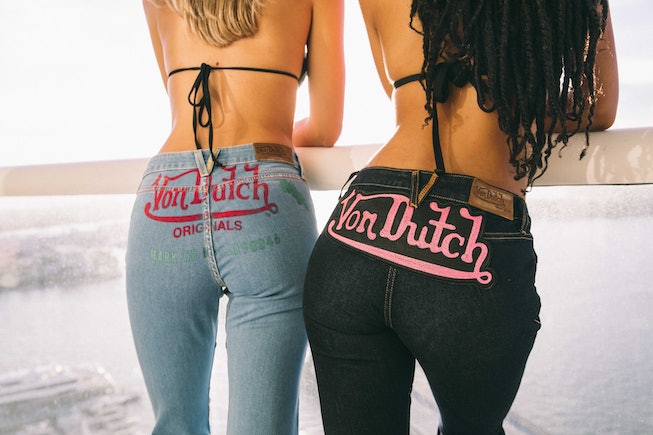 The Von Dutch renaissance is upon us. The mid-aughts brand, known for their celebrity-beloved trucker hats, is embarking on a rebrand with its new premium denim launch set to debut in October and November. To kick things off, the label is releasing a limited-edition retro denim collection, reissuing styles that haven’t been available since 2005.

The retro collection will reintroduce Von Dutch as a luxury brand, as prices for the jeans go for $400 or more. The comeback will also mark a new era led by Paris-based designer Earl Pickens. There are plans to open a boutique in the French capital, as well as reopen the brand's flagship in Los Angeles.

Von Dutch has a complicated history that spans decades. The brand was named after Kenny Howard, whose daughters sold the name to Michael Cassel and Robert Vaughn after his death in 1992. Howard, a Los Angeles-based artist and pinstriper, was also a staunch racist who often professed his admiration for Hitler.

Cassel and Vaughn managed to turn the name into a cultural icon and booming brand popularized by celebrities including Ashton Kutcher, Britney Spears, and Paris Hilton in the mid-2000s before it fell out of fashion favor in the late aughts. Today, however, the Von Dutch logo can be spotted across Instagram, YouTube, and TikTok, from Kylie Jenner and Megan Thee Stallion to Emma Chamberlain and TikToker Chase Hudson.

While Von Dutch is in a good position to tap into Gen Z's love of all things Y2K fashion and nostalgia, Pickens, who is Black, initially did not want to take on the role as creative director for the brand, as he told WWD.

"My eyes popped out and I said, anything but that company, that’s the last place I want to go…," he told the publication. "But we're not really associating with the man so much as the work of the person. There are a lot of things we can play around with — the signature, the iconic flying-eye logo and the pin-striping. I have kids, my kids are interracial, and I'm working for a guy who has a name like that. But I don't see it that way, because I've moved so far away from what he is."