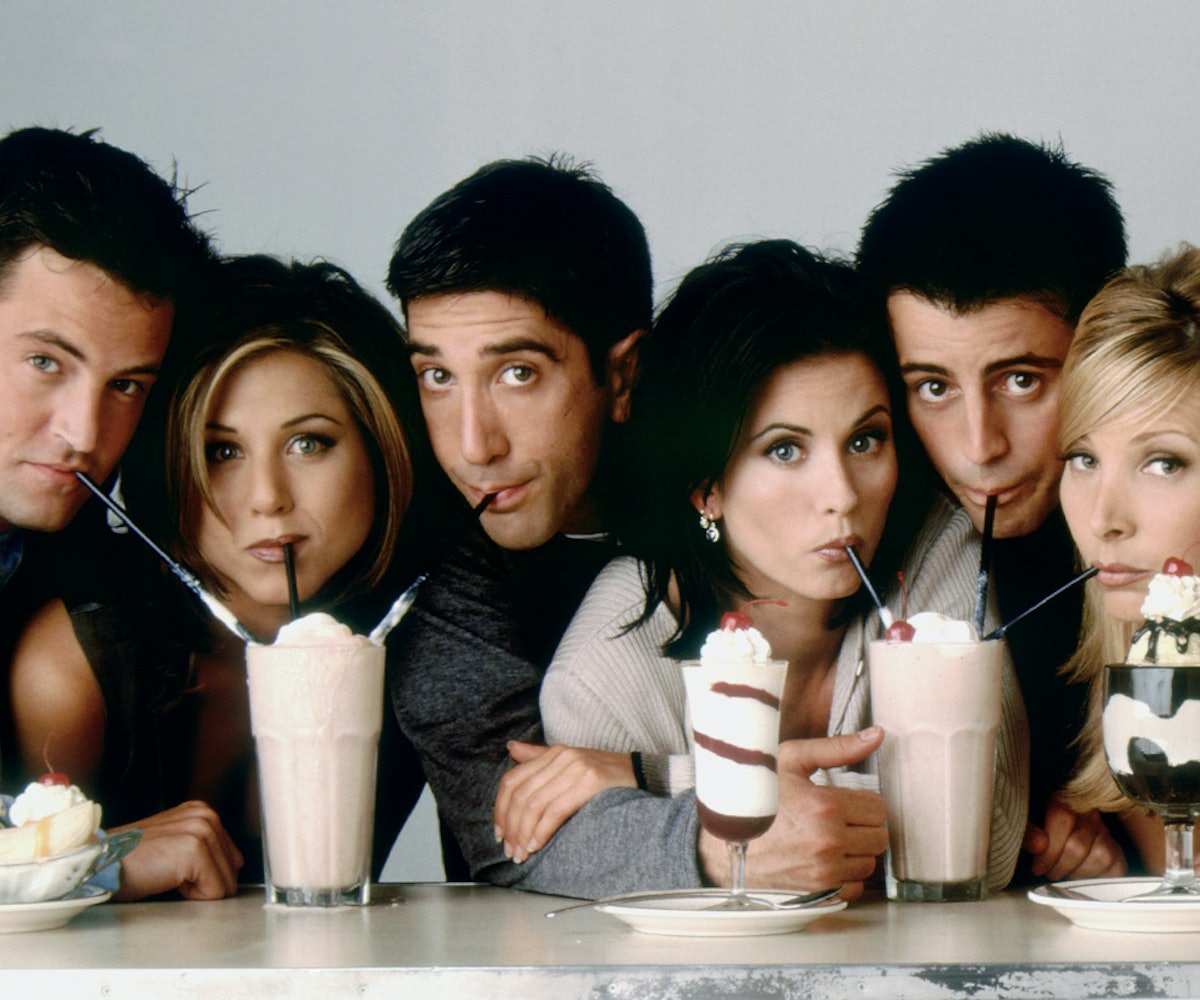 Friends is that rare sitcom with an improbably long afterlife. The show premiered 25 years ago, and has been off the air for 15 years, but during its decade in the limelight, it did everything from prompt people to line up to visit a fictional coffee shop, to ignite hair trends, to paint an aspirational (albeit unrealistic) picture of 20-somethings trying to make it in the big city. It's a part of television's DNA and, thanks to Netflix, has managed to capture the hearts of generations both old(er) and new on a comedic, emotional, and, yes, even fashionable level.

A big sign of the show's impact is the fact that, a quarter of a century later, Friends' costume designer, Debra McGuire, still receives emails from fans asking where they can buy certain pieces. "I have such a hard time not responding, because they're like 15 years old and dying to know," she says. "And so sometimes I just can't resist, and I have to go, 'Okay, so here's the thing, it's not available, but if you have a local seamstress I'll tell you what the fabric is and you can take a screenshot and they can probably make it for you.'"

McGuire started working on Friends four days after giving birth to her second child. "I literally was on the table with my legs open when the call came," she recounts. "This was a Thursday, and I was like, 'Yeah, I'll be there Monday.' Saturday I interviewed people for my crew and Monday I was at work with my mother in tow and a four-day-old baby in a basket." At 42 and starting her third career—painter, fine artist, and jewelry maker being the others—she wasn't young, she says, or all that experienced, but she brought a unique perspective with her. "My approach to it was very much like an artist would approach a project," she explains. "It wasn't about fashion, it wasn't really about anything except character and a visual, and I wanted the visual to look different than any other television show had ever looked." That meant being on the same page as the production designer and the set decorator, creating an aspirational world ("I didn't want them to all be sitting around, laying around, in jeans and sweatshirts," McGuire says), and coming up with different but unifying palettes for the six characters.

Monica, she outlines, wore a lot of black, white, and gray, with splashes of burgundy and red. "That was kind of the initial New York palette," McGuire says. Then there was Rachel, "a rich girl living in Long Island, so she was going to carry with her a different vibe." Rachel's initial palette was a lot of blues and greens which eventually evolved to be more neutral. "Phoebe was my Lower East Side vibe; sort of this bohemian, artistic concept"—very much like McGuire herself. "I love that aesthetic of flowing, beautiful patterns," McGuire says now. "Here was a character who could have some kind of bravado in jewelry and in expression with her hairstyles and accessories. Just her overall vibe is so different than the others."

Moving on to the guys, there was the professor, Ross, who, naturally, had a lot of tweeds, corduroy, and patches infiltrating his brown, beige, and rust-colored wardrobe. Chandler skewed more classic and "paralleled Monica's palette in a way." McGuire mirrored a lot of his looks after her dad's style in the '40s (think: racing stripe shirts and vintage T-shirts, a lot of which McGuire created on her own because of copyright issues), while Joey, the unemployed actor coming from Brooklyn, had more of a cool guy look to him. "You looked at the clothes, and you were like, I want to be their friend," McGuire says. "Talk to anyone, and they resonated with one of the six."

What McGuire finds most fascinating today is that people tend to sartorially identify with the one character who many considered to be one of the least fashion-forward of the bunch: Monica. "What's really interesting is that Monica's wardrobe has gotten so much attention as sort of defining the '90s, and therefore representing where we are right now in 2019," she says. "She was the one character that was under-the-radar at the time. She was a little more New York, refined, classic than the others. And how interesting it is that that is the wardrobe that young people really resonate with. And I think a lot of it has to do with the fit, there was this oversized aspect to the '90s clothes."

As the show progressed, McGuire notes that the clothes did get tighter, pointing to Juicy Couture as the motivation. "I had met the girls that owned Juicy, and they started making these T-shirts that were body-conscious," she says. "So then it became this era of tighter T-shirts, shorter sleeves—belly-baring in some instances."

But while you might spot a branded item here and there, you won't see much of that during the shows decade-long run, especially in the earlier seasons. That's because McGuire created a big chunk of the outfits, a lot of which have become her favorite looks from the show. She points to a "burgundy suspender type skirt" and a "bell bottom red outfit with a peephole for evening" worn by Monica as one of her favorites, and a strapless top worn over a white shirt and accessorized with a man's tie worn by Rachel, as well as a short plaid skirt with knee socks (which Jennifer Aniston was hesitant about, but, as McGuire recounts, "people went berserk over that outfit") as others. The one look that has gotten more comments than any other piece of clothing, though, is a yellow strapless dress worn by Rachel with embroidered jacquard and a high slit that McGuire got from a store called Idol London.

By the time the early '00s rolled around, McGuire dialed back on designing, partially because it was becoming harder and harder to get the actors to come to fittings, but also because the fashion industry started to become interested in labels. "Everyone's focus started being more on brands than on looking unique, and by Season 5 or 6, I was like, Whatever," she says. "I'd already made my mark, I'd already created these characters, and I basically let fashion in for the sake of fashion." It wasn't as exciting, she says, but she made sure she still controlled the image of the characters. Like, for instance, she always bought designer pieces rather than borrowing them. That way, she could alter something if she so pleased. "I did use a lot of designs, but I rarely used them in their pure state," she says. "I could get a designer dress and cut the arms off or add something to the bottom. I wasn't gonna let other designers design my show."

A lot of people don't realize the amount of work that costume designers, and other crew members, put into a show, but suffice it to say, those hours add up. By McGuire's calculations, there were around 50 to 75 outfits needed per script, and that's not including guest stars or episodes with flashbacks. "Do you think anyone watching the show understands what it takes to get from Monday to Thursday? Especially in shows like the Thanksgiving episode where there are multiple time periods and Phoebe's arms blow off as a Civil War nurse," McGuire says. "It's just sort of like whatever, it's a comedy, turn the TV on, turn the TV off. No one really cares, but it was a tremendous amount of work."

One of the most frustrating aspects following the popularity of the show is the fact that McGuire gets little recognition for the work she's put in. Leading up to the 25th anniversary, Target released a Friends-inspired clothing collection but didn't consult McGuire at all. An interesting development, she says, considering the company was one of many that she was in talks with to create a line toward the beginning of the series. "Everyone's gotten very rich from this show, but I've never been able to monetize anything," she shares. "And nobody has come to me in this 25-year reunion and reached out to me to contribute or to be a part of anything in any way." She continues: "Even in the days when they were writing articles, it was as if the clothes just created themselves. Nobody even mentioned my name. It was as if it was its own entity. And I find that really sad. I would've liked to have been asked, and I would've liked to have been able to participate in something that had to do with my ideas and my designs."

Still, McGuire is grateful for the opportunity to have been a part of television history. It jump-started her career and led to her working on projects like Anchorman, Superbad, and Fresh Off the Boat. "It was 10 very formative years of my life, and impacted everything that I did," she reflects. "It gave me sort of a leg up into a world that I was eager to explore. And I'm eternally grateful for that. And it also taught me, as a designer, that what we do is not about us and not about our own egos. It's about working with other people, the creators of that show, and understanding their vision of who these characters are, what the joke is that they're trying to convey, how they want it to land, and being able to support that."

At the moment, McGuire is working on a project based on layers of her experiences (she's an artist first and foremost, remember). She's in the process of gathering fitting photos, scripts, episode notes, and cutting and weaving them together to memorialize the show. "It will be like an archaeology of Friends," she says. "Nothing will be recognizable, but for me, it will be layers of taking things that no longer have any meaning and giving it another meaning."

NEXT UP
Fashion
The Mini Skirt Was The Must-Have Celebrity Fashion Item Of 2022
Fashion
The Founders of Gauntlett Cheng Want You To Dress In Vintage For The Holidays
Life
NYLON Daily Newsletter: November 23, 2022
Fashion
Kim Petras Wore An All-Denim Homage To Britney Spears At The 2022 AMAs