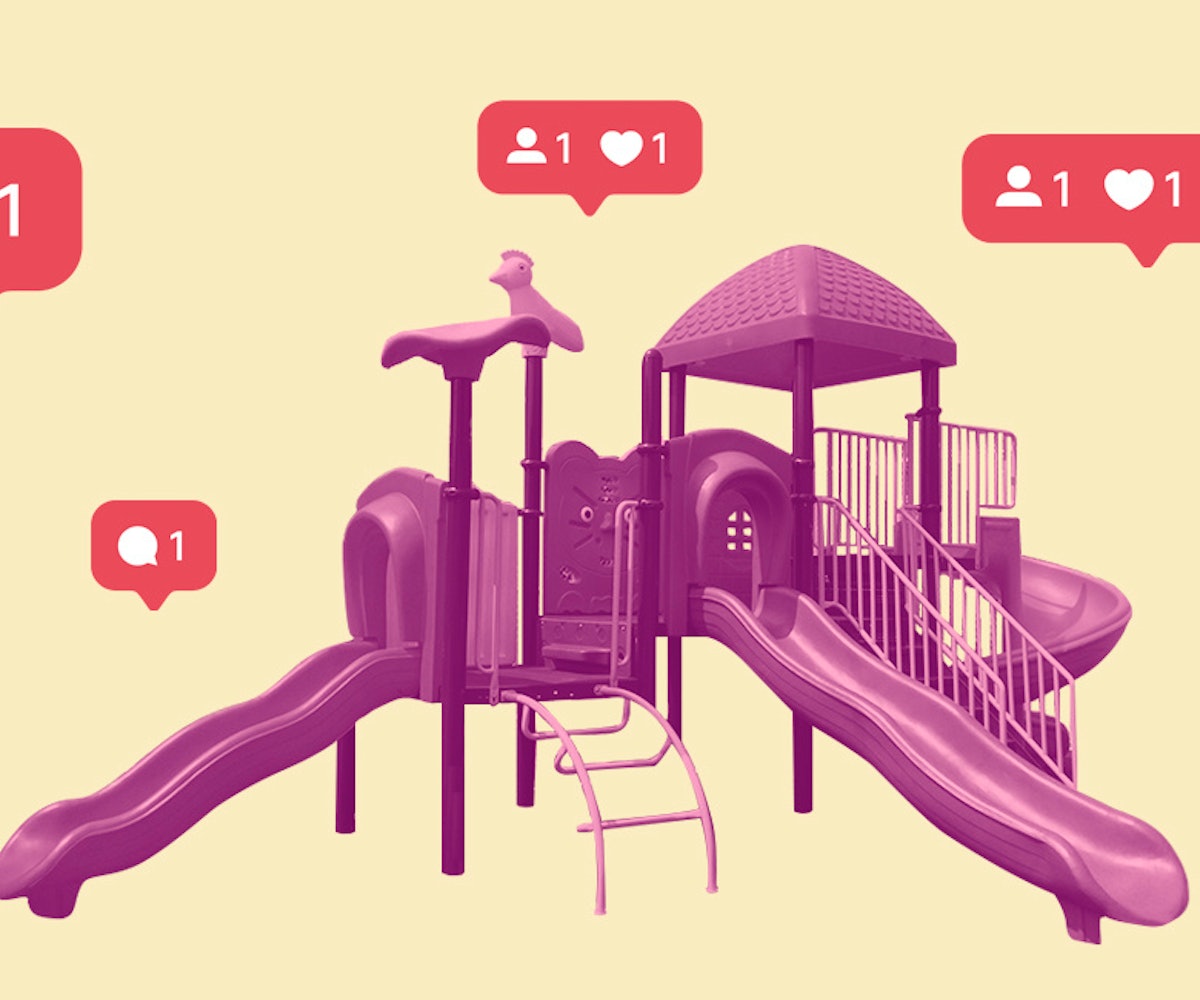 We've pretty much all been there: Maybe it's a friend ignoring our messages; maybe they're not liking our posts anymore; maybe we realize they've unfollowed us entirely. If we're lucky, we can rationalize it: It was an accident, we tell ourselves, and move on with our day, neuroses-free.

But a lot of us will overanalyze it. If we know the person in real life, we'll scroll back through our last interactions, wondering what we did wrong. Sometimes these social media slights truly don't mean anything, but a lot of the time, they do—especially since, increasingly, we live out entire friendships online.

While we are all very familiar with the idea of ghosting in the romantic sense—when someone you thought you had something with stops communicating with you, too cowardly to let you know it's going nowhere; and so, you're left picking at clues where there are none, blaming yourself for it going sour. But what about when it happens in non-romantic relationships? The internet has made it easier to maintain relationships than ever, but it's a double-edged sword in that it's also very easy to end them without ever having to break the difficult truth to someone that, well, you just don't like them anymore.

An unfollow in itself might not mean much, sure. But when conversations have already been petering out, when someone has snubbed your invite to hang out a few times, it's often the final nail in the coffin. I spoke to Nikki, who told me that her IRL best friend ghosted her after Nikki had experienced a bout of bad mental health. After a while, Nikki says, her former best friend stopped answering her calls and texts and unfriended her on everything. This, understandably, damaged Nikki's self-esteem: "I felt rubbish, because I guess I'd been cut off based on the fact I experience mental illness? It's so damaging to be cut off for any reason, let alone for something you have no control over. It made me feel ashamed of my experiences and like I wasn't good enough".

This might all seem very "millennial problems," but Catherine, who is 42, experienced this with a longtime friend. Not only did this friend start changing plans on Catherine, but then also, she left Catherine on read receipts, so that Catherine could see that texts were being read but not replied to. When Catherine tried to confront the issue, asking her friend if everything was okay between them, she got no response. It escalated to the point where Catherine reached out to her friend's husband "to make sure she was okay," but he didn't reply and eventually also deleted her off Facebook. While this behavior hurt, Catherine looks at it rationally: "Initially, I was concerned as to what I'd done, but if someone isn't willing to discuss it—whether by text or in person, then I don't have time to think about it any further. I find the behavior very strange and attention-seeking, and it must be terribly draining for her."

The internet has made making friends easy, but with that is the message that everyone is replaceable.

There are different ways that online ghostings signal that a friendship is entirely over. I spoke to Jane, who told me that she experienced a social media ghosting following an IRL one. She tells me that she was living with a best friend who suddenly moved out of the house without a word, not even replying to texts asking if she was okay. When Jane discovered her friend had a baby, she texted her congratulations but got no response. While her experience is slightly different, Jane believes ghosting in friendships is common because "it's easier to do 'life admin' and overhaul who you hang out with now because so much of your connection is online. You can just say, 'I'm done with you,' and block them on everything." Social media removes the awkwardness of having to hear someone's reaction to you falling out with them.

Not knowing where you stand with someone can wreak havoc on your mental health. I spoke to experts to determine whether these playground-style tactics are new and whether they can have a negative effect on us. Frank McAndrew, a social psychologist, told me that he believes it is nothing new but is "facilitated by the internet." He added that "people have always abruptly ended relationships by simply not returning phone calls; the internet is just one escape route." While he doesn't believe being ghosted is any more traumatic than a traditional dumping, he did say that one bad thing about simply disappearing is that "the other person goes through a period of uncertainty about the status of the relationship and may waste time and effort trying to reestablish contact."

Christine Hohlbaum, who wrote the article "Why Ghosting is Leading the World's Mental Health Crisis" in Psychology Today, takes a more hardline approach. She believes that due to the internet speeding up life, "people make snap decisions based on convenience, whether it is ordering something online or ending a relationship." She adds that this leads to people thinking they are anonymous, when in truth they are not. She believes that being ghosted can be traumatic as it "leads to a sense of powerlessness" as you have no context or information. She adds that "ghosting is cruel, and can have an enormous impact on a person's self-esteem," as well as a "cowardly way of expressing your dissatisfaction."

We need to stop acting as if "online" is separate to "real life."

All of us, at one time or another, have made thoughtless decisions that have hurt someone else's feelings. But how can we behave responsibly online? Well, for one, we need to stop acting as if "online" is separate to "real life." We spend all day constantly interacting with people we know from different parts of our lives. For every 10 minutes that you spend speaking to a friend on Whatsapp, how many do you spend at their house? The two realms interact, and McAndrew agrees: "Try as best you can to treat people online the way you would treat them in person. In many ways, it is easier to treat others badly online because you do not directly see the hurt in their eyes. It may take a little extra effort to be sensitive in an online relationship."

Not only that, but context is lost online: An interaction you might think is harmless could hurt someone else because they can't see you laughing. Christine adds: "Remember that a typed message has no tone, so the other person may misinterpret what you are saying. Emojis can help convey your meaning, but in truth, picking up the phone or sending an audio note are better ways of conveying your feelings. Face-to-face contact is the best because 90 percent of communication is transferred through body language."

The internet has made making friends easy, but with that is the message that everyone is replaceable. More than ever, we feel as if we don't owe anyone anything: We put ourselves first in the name of self-care, isolate ourselves, take baths, and cut out "toxic" people. But we do have a responsibility to the feelings of others: If you can't maintain a relationship with someone anymore, tell them. Having that conversation is hard, but what's harder is feeling abandoned with no explanation and no idea how to change your behavior. Ending a friendship with an unfollow or by ignoring someone's messages is childish and cruel. It's playground behavior: "Why has Megan unfollowed me?" is the new "Why wasn't I invited to Megan's sleepover?" It's a social tactic that unfairly forces you to fill in the gaps. And because it exists "just online," you feel petty if you talk about it. Jane agrees: "It can often feel really stupid to outright ask them about it, because it looks so juvenile written out in a text, even though it can be legitimately hurtful."

If this does happen to you, it's normal to wonder what you've done, but the answer is often: not much. People get sick of people, they let grudges accumulate, and sometimes friendships just run their course. But the humane, responsible thing to do is tell someone if you can no longer continue your relationship with them. If you can't follow someone but still want to be their friend, tell them. If it's unhealthy for you to be around them, tell them. The world is a difficult place, and we all owe one another kindness and honesty, even if the maturity and emotional strength that confrontation takes is difficult.

NEXT UP
The Art Issue 2022
True Life: My Partner Is Obsessed With NFTs
Astrology
December 2022’s Full Moon In Gemini Is A Doozy
Astrology
11 Beautiful Tarot Decks To Gift Your Metaphysical Friend
Astrology
Your Natal Saturn Placement In Astrology, Explained