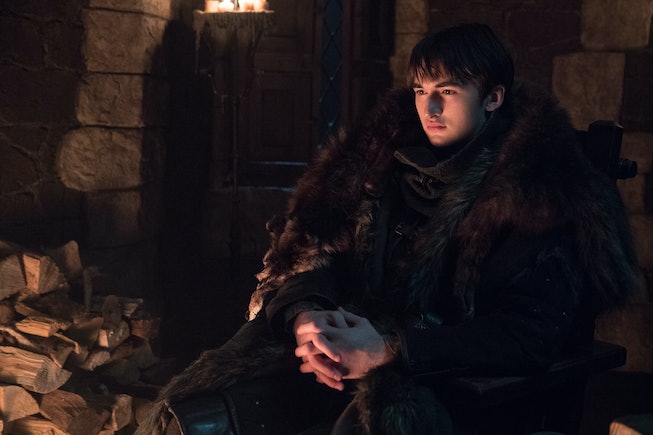 Photo courtesy of Game of Thrones.

After watching the first episode of Game of Thrones's final season, my emotions are at an all time high and I'm still basking in the glorious return that has been two years in the making. But that doesn't mean I didn't have lots of thoughts while watching "Winterfell." Bear with me as I share some of the most random ones.

Daenerys and her hard-earned army of Dothraki and Unsullied have finally arrived in Winterfell. The people of the Northern city are in awe of Jon's return and probably Daenerys' silver hair. But when Missandei and Grey Worm pull up atop horses they are bestowed particularly jaw-dropping stares. That's when it hit me: They have probably never seen Black people in Winterfell.

There are plenty of moments of comic relief in "Winterfell," but I never laughed as hard as I did every time it was revealed that Bran was sitting in his chair, witnessing the whole thing. Sansa and Tyrion reuniting as former husband and wife? Bran saw it. Sam having a bad reaction after learning his father and brother were killed? Bran was waiting for him. Jaime casually strolling through Winterfell? Meet the boy you left permanently disabled. Bran lives for drama.

Sansa and Tyrion are weird exes

They never wanted to marry in the first place, but they don't hate each other. They actually have a lot in common surviving Cersei's wrath and all, so they could work together. And yet that's just not happening—particularly once Sansa learns that Tyrion has invited the whole Lannister army up to Winterfell. She once thought he was the cleverest man she ever knew, but... not anymore.

Jon is cousins with the dragons

Now that the cat is out of the bag about Jon being the heir to the Iron Throne, it's probably going to take him a second to realize he's Daenery's nephew. I wonder how long it will take him to realize that he's technically cousins with the dragons.

After she slept with Euron Greyjoy and he made a comment about putting a "prince" in Cersei, she makes a face that clearly reveals she's plotting on the usefulness of another child. This is exactly the kind of master-mindedness that has made Kris Jenner such a revered leader of the Kardashian-Jenner clan.

Bonus: Cersei is also me, just like she stood her grand with Euron, telling him he has to earn the right to have sex with her and then sleeping with him 10 minutes later, I have done the exact same thing—including telling the man to leave me alone right after the deed is done. Queens, they're just like us.

Oh, and in case anyone was wondering if Cersei just faked the whole pregnancy at the end of last season? Well, she's drinking wine again, so I'd say: Yes.