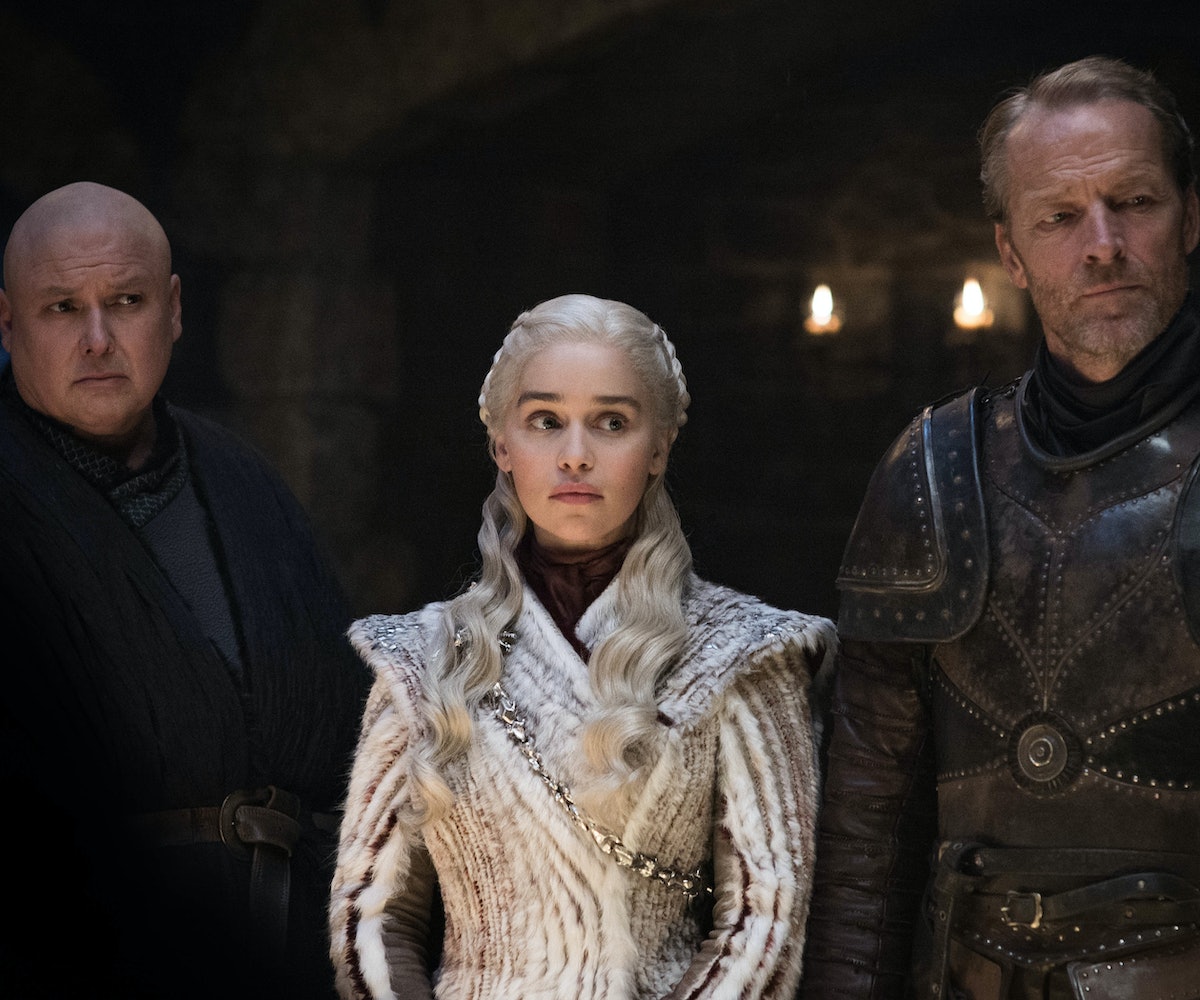 We've made it through two episodes in the final season of Game of Thrones without any major casualties. This won't be the case for much longer, and we shouldn't take it for granted. The army of the dead is literally at Winterfell's door, plus life isn't nearly as precious as power in the HBO series. We need to bring our favorite (and least favorite characters) their flowers while they're still around to smell them. It wouldn't be right to let our remaining characters perish without first acknowledging who was the best and worst amongst them.

So I'm here to rank the surviving characters that are left—and yes, I am ready to argue (even though I'm right).

This may be an unpopular opinion with anyone who is attracted to slick hair and constant angst, but Jon Snow is actually the most annoying character on Game of Thrones. Melisandre should have worked her light magic to bring Hodor back from the dead, instead. What frustrates me the most about Jon is that, despite everything he's been through, he still thinks he has the luxury of being naive. Yes, he's *hOnOrAbLe*, but he is extremely lacking in the common sense department. If Ned Stark had to die for his honor, Jon should go, too.

First of all, Euron's post-coital etiquette is tacky. Before he could even get his trousers back on, he was demanding Cersei tell him how good he was compared to her other lovers. That's a lot of nerve for someone who couldn't even get Cersei elephants for her army. We've seen characters with better reasons for having so much confidence come and go (RIP Prince Oberyn), and Euron isn't anything special. Also, we can't trust anyone who would ruthlessly go against their own family, like he did with Yara and Theon.

Speaking of Theon, I still hate him, too. I don't care that he lost his dick and some of his finger meat at the hands of Ramsey Bolton. He should have paid with his life for what he did to the Starks. End of story. He's dead weight and unfit for anything. I hope he's the first to go in the Battle of Winterfell.

I might be a bad feminist for this, but I'm not a fan of Yara Greyjoy, either. Despite being a queer woman, she's a little too comfortable with the codes of the bad boy club she was raised in. Plus, she has only ever cared about the Iron Islands, which is where she's headed now. Sis, I just don't have time to be happy for you and that pile of rocks right now when night of the living dead is actually upon us. Throw the whole Greyjoy house away.

Ser Jorah Mormont is one of those characters who really exists to make everyone around him look good. Samwell was the hero after treating Jorah's greyscale. Tyrion became hand of the queen, after Ser Jorah brought him to Daenerys, and Tyrion won this accolade despite Ser Jorah being right. there. the. whole. time. Furthermore, Ser Jorah is kind of the Drake of Game of Thrones, in that he thinks his nice guy act will one day win him Daenerys' heart. But it's not going to happen. Men who can't move on from rejection—even soft, friendly rejections—make me uncomfortable.

No, Jaime is not the same person he was when he pushed Bran out of a window in Season 1. However, he hasn't changed for the better on his own, and it took him a really long time to move to the right side of history (and, you know, fall out of love with his sister). There just isn't any honor in that. I know many fans, and probably the Game of Thrones showrunners think Jamie is profoundly interesting. But to me, he's just a rich white dude from a monied family, who's been afforded an existential crisis about his place in the world. You can find that on any corner in Williamsburg, Brooklyn.

I want more for Gilly because she's survived so much—including her incestuous father (and the father to her son), Craster. She also takes good care of her baby, Sam, and is extremely maternal to children who aren't hers. But we don't need mommies right now. If she can't wield a sword, share some vital information, or help with war strategy, she's dead weight. If Sam isn't careful, she could very easily hold him back at a pivotal moment.

Sansa has survived. She's done a hell of a job surviving. But that's all she's done, and it wouldn't have happened without the skills of other people around her. She has come out on the other side, a little wiser and less quick to trust other people, but it's hard to rally behind her when so many other characters have really earned their stripes. Sansa has learned the game, but she's still not ready to play it. She's also the reason Ned is dead.

Gendry can confidently say that he was the key to Arya's sexual awakening… even if it was her awakening to the fact that she actually prefers women. Gendry is cute, but he's not all that, and I need someone who is offering more than a buzzcut and strong biceps to this story right now.

Ever in search of his next paycheck, Bronn is the City Girl of the show. His catchphrase should literally be, "Where da bag at?" He's also really funny—not unlike Tyrion, but taller. Unfortunately, his constant pursuit of cash makes him unreliable and untrustworthy.

The only reason Podrick isn't higher on the list is because we haven't seen much of him. But the Yelp reviews on his dick game, his amazing singing voice, and the fact that he's survived this long despite only learning how to ride a horse last week are so impressive.

I want to like Bran so much more than I do. He has a brand-new job as the three-eyed raven, which basically makes him the keeper of all teas. But it's hard to love him because he's just so weird now. He doesn't even identify as Bran Stark anymore, and I'm suspicious that he already knows everyone is going to die, but just won't tell them.

The Onion Knight is the definition of a thoroughbred. I'm at ease whenever he's on the screen because I know he's going to have solid, good advice that makes sense and is in the best interest of the entire realm. He's one of the most reliable characters in the show, made wiser by age.

Everyone knows that Missandei is the real hand of the queen. She's more than a servant to Daenerys: She's smart, insightful, and strategic. She's the best friend we all need on our teams. I just wish they gave her more screen time.

Kicking off my top 10 is the Red Priestess. Sis has the range: She's a seductress, a war strategist, a magical being, and committed to fulfilling both missions and prophecies. She has the full package necessary to survive the craziness of Westeros and the long night.

Tormund comes through dripping in superhuman strength and charisma every time he hits the screen. I love that he's stayed true to himself even as he went from wildling opposition to brother amongst the fancy folks south of the wall. Most recently, he's made me uncomfortable crossing boundaries in his pursuit of Brienne, but I know she can hold her own and will probably be putting him in his place, if they survive the Battle of Winterfell.

He could give Bran a run for his money in the secrets department, but Varys is more likable because he makes having secrets look so much cooler. Varys comes and goes like a mist, popping up across seas to be of assistance to whichever monarch he has the most faith in. It's still unclear to me whether or not his moves are motivated by power or morality, but I crave more scenes with him in it to find out the answer.

He grew up right before my eyes. Sam has gone from chubby Night's Watch reject to guerilla maester. He's Neville Longbottom, more valuable than we thought he would be when all of this first started. He is the character who I am irrationally invested in. It's going to tear me apart when he dies.

Excuse me, Ser Brienne of Tarth. Our girl is a knight now! And she deserves it, damnit. She's fought off men, ghosts, Jamie's ego, Tormund's advances, and now she's about to face the walking dead. Brienne made sure Sansa was safe and kept her promise to Lady Catelyn until the very end. She is going to die with honor and make us all proud.

Small but mighty enough to steal every single scene she's in, Lyanna Mormont knows exactly what she's doing. If Cersei was smart, she'd keep her eyes on this northern lady at all times. If she's this fierce now, imagine what she'll be capable of when she turns 18.

For the men and women who aren't cushioned by high-ranking families, it's grit, tenacity, and resilience that keep them going. You keep living until you die. The Hound lives with this acceptance. He's questioned his own faith and morality, but he's not going to give any of it power over his survival. The Hound doesn't hold grudges anymore—except maybe against his brother—but he's also not backing down. His motto is: It is what it is.

You can't help but love Tyrion, try as you may to hate him. He drinks in moments of crisis. He killed his own father while Lord Tywin sat on the toilet. He killed his girlfriend for breaking his heart. But Tyrion sees the bigger picture—which includes saving the world from zombies and saving the remaining Lannisters from themselves. Tyrion has redeemed himself over and over again, delivering stinging one-liners at every turn. We really hope he gets his wish to die in his bed at age 80 with a belly full of wine and, well, some other stuff.

My top three characters are all eligible for the number one spot, and yes, they're all women. Arya has proven herself a formidable foe to all of her enemies, and a powerful equal to her lover Gendry. The youngest Stark daughter's evolution from little girl to young woman has been full of adventure, heartbreak, isolation, and redemption. She's consistently the most satisfying character to watch. Even as someone who isn't in the running to sit on the throne, I think her chances of survival after the Battle of Winterfell are strong.

Money, power, respect—Cersei has nurtured and cultivated all these qualities. Her methods to attain and maintain these things have been unconscionable, and she's suffered greatly in her pursuit: She's lost all three of her children, she had to undergo a humiliating public atonement, and she had to have sex with both Robert Baratheon and Euron Greyjoy. True, Cersei has stepped into mad queen territory, but she's one of the most dynamic and interesting characters as a result. I can't wait for her to die, but I am really going to really miss her when she does.

Anyone who doesn't acknowledge that Daenerys is one of the best characters on this show is... clearly not watching this show. Daenerys is no longer just the uncomplicated victim that she was when we started this journey, easy to root for because she rose above adversity. She is THAT bitch, for better or for worse. She's worked too hard to turn her back on her claim to the throne, but she's not so laser-focused on being Queen that she'll ignore the deadly threats from north of the Wall. She's not above burning some human bridges, though. Daenerys is complex; she's given us some of the best kill scenes and most endearing and tender moments. She was the apple of Khal Drogo's eye and is the mother of dragons. I stan.