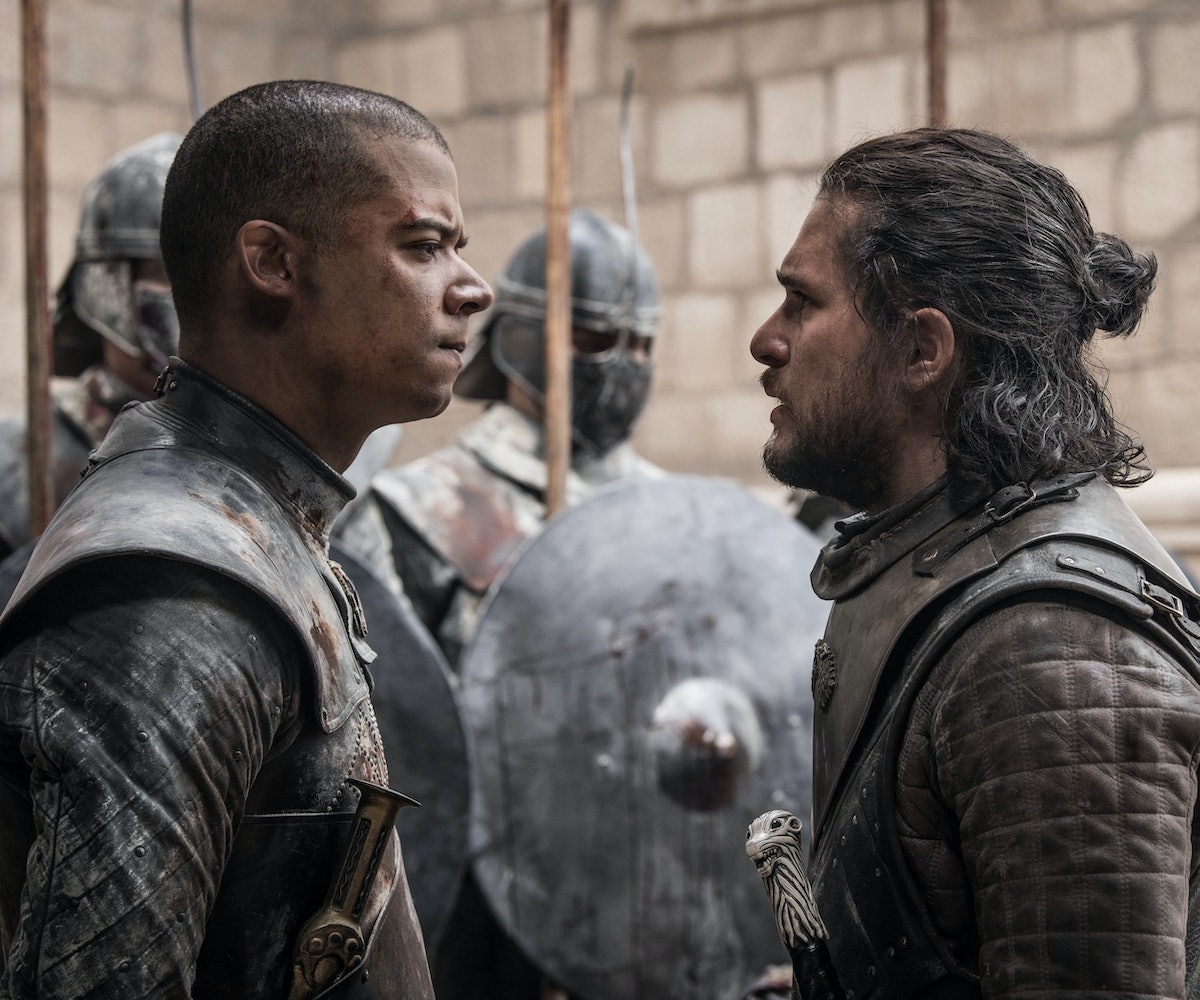 There are a lot of reasons to mourn as you reflect on the final episode of Game of Thrones. Some of the loose ends were tied up in ways we didn't see coming—Bran is the King of Westeros... okay. And others were left completely open, cast aside as if they never existed; like, Azor Ahai was basically an old wives' tale? We lost one more beloved character, namely Daenerys Targaryen, who could only be blocked from the Throne by death itself. But then, others received a relatively happy ending, like Samwell Tarly, Tyrion Lannister, Ser Davos, and Bronn, who all ended up on King Bran's council. Even Ghost finally got a chin rub from Jon. But the one character who got absolutely no justice was Grey Worm—and he deserved better.

As you'll recall, Grey Worm's girlfriend Missandei was killed at the hands of Cersei Lannister in the fourth episode. Missandei was the closest person to Grey Worm, the only one who really understood what it was to go from bondage to freedom, the only one with whom he was truly intimate. And while most of the focus was on Daenerys' grief-spurred rage, since it resulted in a ruthless attack on King's Landing from the back of her dragon in episode five, Grey Worm was also driven by vengeance that day, and he led the Unsullied in a simultaneous ground attack, unloading all of his sadness and anger onto Cersei's subjects. It's no wonder he was so passionate about breaking the wheel—he saw the effectiveness of that strategy. So when, in the finale episode, Daenerys was killed, Grey Worm lost more than just a leader, he lost a cause for which to fight. All he could hope to achieve was some retribution against the people who took both away from him.

And he might have gotten it: Following Daenerys' murder, Grey Worm and the Unsullied held King's Landing, and kept both Jon Snow and Tyrion as prisoners, both of whom had betrayed their queen. It's clear that Grey Worm was ready to punish these treasonous men, but his hand was forced when the northern army descended on King's Landing, along with the lords of the rest of the realm. Soon enough, both men were all but freed, with Tyrion's punishment effectively being a reward: He will be the new Hand of the King to Bran, a leader he himself selected. And Jon would get to return to the North, to serve again on the Night's Watch; it's a life sentence, but freedom within that life. No wonder our last shot of Grew Worm is seeing him seethe aboard his ship at the mere sight of Jon walking past him.

But perhaps the most unfair part of all was that Grey Worm spent the last episode written as a villain, or at the very least as the last-standing antagonist to oppose the powers-that-be. As he stood his ground in front of the all-white leaders of Westeros, they stared back at him with mistrust, defensiveness, and aggression. Their faces were reminders of the cold welcome Grey Worm and Missandei received at Winterfell in the season opener; the racist and xenophobic undertones were palpable.

The episode ended with Grey Worm and the Unsullied leaving King's Landing for Naath, the beautiful homeland of Missandei, who—though she barely remembered it, having been kidnapped into slavery at only five years old—once described its wonders to Grey Worm. Now, it is the only way he can stay connected to her memory, and to all that he has lost, all that they did.