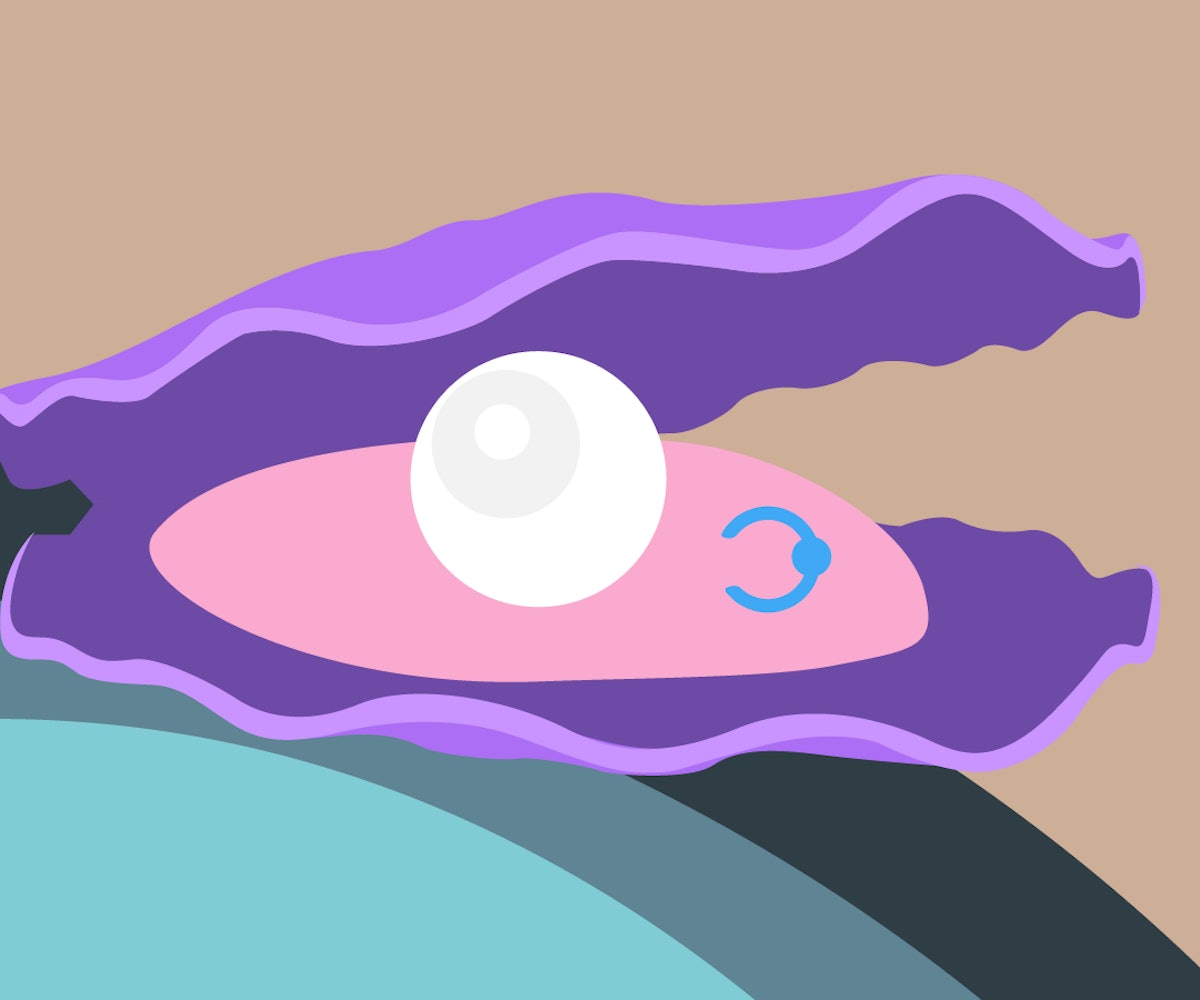 Piercings done... down there are taboo; they're rarely talked about unless with a partner or a really, really close friend. People barely talk about sex, why would they talk about their private parts? Well, this is part of the reason why genitalia piercings are so stigmatized: If people don't talk about it, you won't learn about it. So, let's talk about it.

First thing to know: There are a couple of different kinds of genital piercings that women can get done (female anatomy is expansive, dammit). Vicki Rose of 28 Studios does a variety, including the 'Christina' piercing, "which is going to be right above where your outer labia meets your pubic mound." Then there's the 'Princess Albertina' (which is a play off of the male genitalia piercing called the 'Prince Albert'), which "goes through the urethra and comes out of the vaginal opening." There's also a 'Triangle' piercing which "goes horizontally through the clitoral hood and passes underneath, behind the clitoris and behind the clitoral shaft." A 'Fourchette' is placed "where the vaginal opening meets the inner labia." Finally, there's the outer and inner labial piercings, and the most popular and most common, the hood, which is the layer of skin above the clitoris. This can be pierced either vertically (also known as VCH) or horizontally (HCH).

There's a common misconception that women who choose to get these kinds of piercings are sexually adventurous, to put it mildly. But Rose says that it's not so easy to judge who does and doesn't have a genital piercing. "I do these on all types of clients, from people in the medical field to lawyers," she says. "Anyone you could think of could be walking around with one of these and you'd not know it."

With that said, there can be sexual benefits to these piercings. Rose points out that, with piercings like the VCH and HCH, the bar bead, which often rests on top of the clitoris, can be used by yourself or with your partner as a means of stimulation. While others, like labia piercings, can stimulate the penis during intercourse as the metal rubs against it. Rose points out that the Triangle piercing is probably considered the most stimulating piercing out of the vulva bunch.

You might've noticed that a lot of these piercings involve areas around the clitoris and not the clitoris itself. While Rose says she does have people ask for that, she tends to turn them down because the clitoris has to be pretty large in order to be pierced. In fact, a lot of these piercings are anatomy dependent, which means that you should consult with your piercer in advance of getting it done. No two vulvas are alike, after all. For VCH and HCH piercings, Thompson points out that a lot of piercers tend to do the "Q-tip" test, which basically includes bringing the head of a Q-tip underneath the hood, "and if the Q-tip is covered by the hood, then there's generally enough room." Thompson tells us: "You want to give your client what they want and how they want it. But a lot of times, the anatomy doesn't support what you want to get, so you can always adjust and get something else. Instead of going vertically, you can go horizontally, etc."

As far as pain goes, just like nipple piercings aren't as scary as you think, the same applies to this area. It all comes down to mind over matter. "I would say pain is relative," Rose says. "It's more of the emotional toll of actually thinking about it, deciding to go through with it, and knowing that you are putting yourself in pain. If they were that bad, no one would get them done." Thompson adds: "Basically, just get your mind right if you want to do it. I'd say get in a good frame of mind and get it at a time when you have the time to heal it."

Speaking of healing, most piercings in the genitalia area should take from eight to 12 weeks to be fully healed. Aftercare should involve saline flushes, and you should try to avoid using anything abrasive (wash clothes, loofahs) or super-crazy scented body washes in that area. "Honestly, you could do nothing to the piercing at all and just splash it with water prior to getting out of the shower," Rose says. "They're very quick, easy healers."

But, you should abstain from sex for a while, because (a) ouch and (b) "you're basically just trying to avoid sharing fluids with your partner, so that your body's own bacteria and natural composition can heal the piercing itself," Rose explains. And don't worry about going crazy with maintenance down there before getting it done. Rose says it doesn't bother her either way if you shave or not, adding, however: "If we're doing outer labia piercings on a vulva, then it might be a little more comfortable for the wearer to have shaved or trimmed a little." She also says you should consult your piercer on whether they care or not if you're menstruating on the day you're getting pierced (she doesn't).

Now that you know all of the logistics, remember that you don't need a reason other than wanting to get it done in order to actually get it done. Rose shares that she has a lot of older clients come in requesting genitalia piercings; women comfortable with their bodies who are looking for a little excitement and to switch things up. She also has some people use the piercings as a way of confronting emotional or physical trauma and thus reclaiming their bodies as their own. The choice is ultimately yours. Rose says that she's had hers done a few times and passes along this reminder: It can be temporary if you want it to be. "It's not like a tattoo where you have to go through multiple laser sessions to remove something that you're not pleased with… If you were to get a piercing and are not happy with the results or don't like the way that it visibly looks on you, it's something that you can remove very easily and something that you could redo in the future if you decide that you want to do it again."

NEXT UP
Beauty
How To Hide Facial Piercings, From Septum To Nostril Rings
Beauty
MAC and Stranger Things Are Dropping A Very ’80s Makeup Collaboration
Life
The Spiritual Meaning Of May 2022’s Full Flower Moon Lunar Eclipse In Scorpio
Life
Venus In Aries 2022, Explained