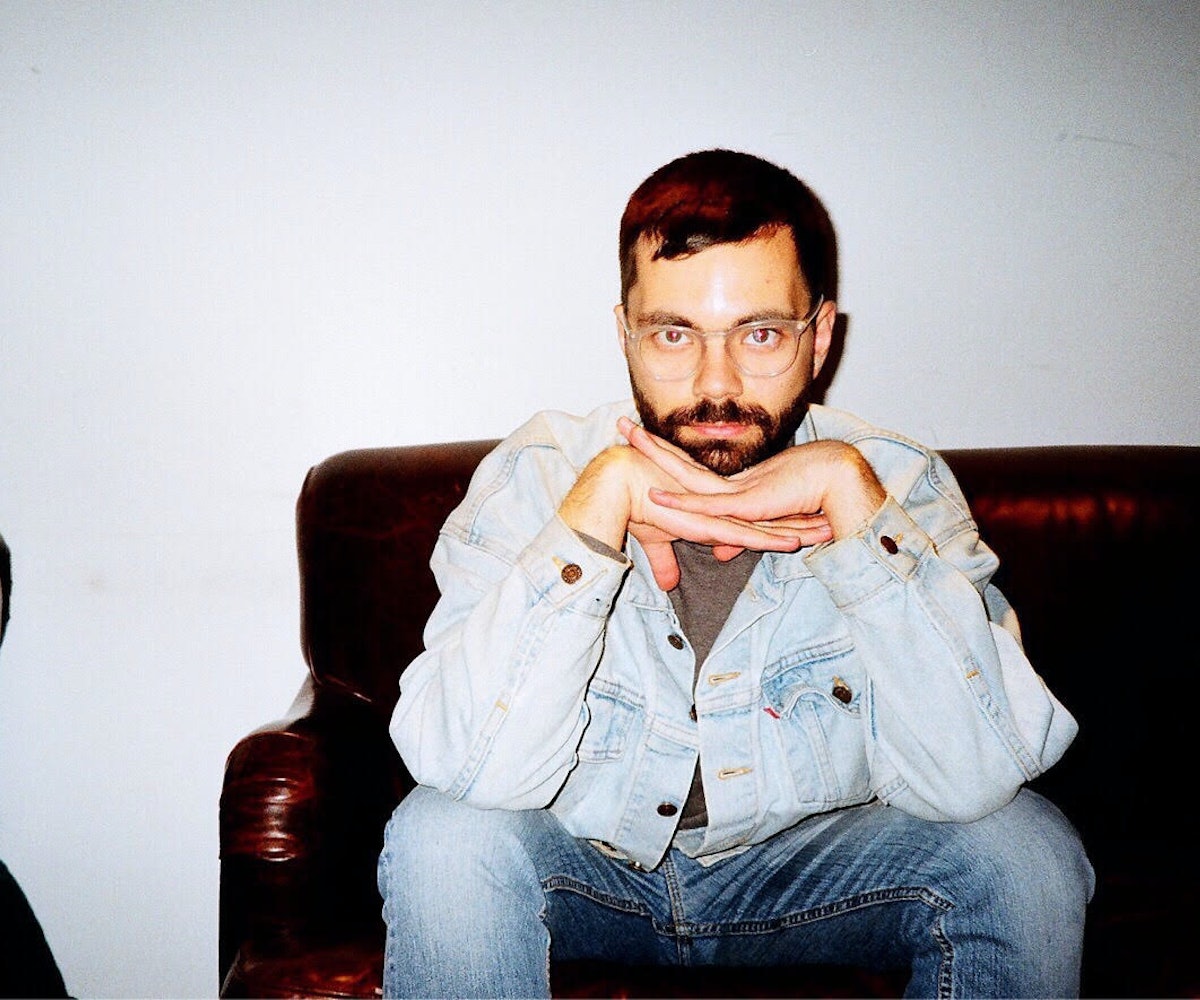 The first time I saw George Civeris perform, when he opened for Jen Kirkman last January at Caroline's on Broadway, he came out onstage and, with the wily arch of an eyebrow, said, "My New Year's resolution is to interpret everything anyone says to me as violently homophobic."

It was not only the perfect encapsulation of his comic persona but also it held the implication of a perhaps larger goal Civeris was working toward in his comedy: saying who he is without having to spell it out. And yet, Civeris thought the joke was kind of dumb when he first wrote it—then he changed his mind about it, telling me: "Unintentionally, it actually is the perfect opener because it does two things simultaneously, which is that it informs people that I'm gay without me being like, 'So I'm gay.' And it lets them know that I'm kind of in character as a weirdo, or someone who would say something like that."

The Brooklyn-based writer and comedian has one of the sharpest ears for how younger LGBTQ people, especially those who are "extremely online," talk about themselves, yes, but also about the role of identity politics and activism more broadly. Shaped by a think piece industrial complex that ushered in what has been perceived as a new, if imperfect, approach to discourses on who we are and how our multifaceted backgrounds influence our place in the world, Civeris is particularly interested in using his comedy to examine the structural machinations of what it's like to be a queer, maybe too woke person living under capitalism. "My real resolution," Civeris continued in his set, "is to be a more ethical consumer. I'm only buying clothing from companies that use LGBTQ-friendly sweatshops."

Civeris' work has a playful sense of danger about it, a benevolent critique of some of our own worst habits, but, more importantly, the (sub)culture and society that exploits those habits. Civeris is working toward real change: his monthly comedy show, Living for It, co-hosted with fellow comedians Anya Volz and Kendall Farrell, donates all its proceeds to local, social justice-oriented organizations such as UpRose and the Sylvia Rivera Law Project.

Recently, I sat down with Civeris to talk about, well, everything: comedy, Twitter, the 2016 Orlando nightclub shooting, queer people and capitalism, and not becoming valedictorian.

I did this thing called comic-in-residence at a comedy club in Boston called The Comedy Studio. And they asked us for quotes that could be used under our headshots. This was two years ago, but the quote that I gave them was, "My favorite form of activism is always looking really concerned."

So for you, what came first: the persona or the desire to start writing jokes that became a cohesive kind of comic identity?

I guess if I could describe my comic persona it would be a gay guy who believes that all social change comes from him talking about himself. [Laughs] It's very much inspired by my experience with queer spaces in college. [My college] had a really incredible LGBT community center, and a lot of [the people there] were doing genuinely great work that I do not want to disparage it in any way. But one thing that I just found incredibly funny throughout the entire experience is a lot of people that had leadership roles in queer student groups came from insanely privileged backgrounds—myself included.

So, in many ways, my stand-up is making fun of people like myself. There's a way in which people thought that changing the small injustices that existed within an elite college environment was just as good as changing things in the world at large. [Laughs]

And then the other thing that really influenced the way I think about the world was my experience in the tech industry where I worked for two years after college. Because the tech industry is another place where no one says what they mean and everyone's just, like, constantly talking out of their ass.

Oh, and the last thing I guess would be my experience in grad school. I went to grad school for media studies, which is obviously incredibly brave. I remember getting an email about an event like two months after Trump was elected called "Can Aesthetics Disarm Oppression?" And it's like… no. So, more broadly, I'm really interested in the ways words don't mean what they seem to mean.

A lot of your comedy revolves around a critique of Rainbow Capitalism and neoliberal gay politics.

Like I said, I'm interested in the ways words are used to deceive people. So I think with making fun of things like Rainbow Capitalism or the gentrification of gay politics, it's about kind of the sinister ways in which language that originates from, let's say queer activists in the '70s and '80s, is then repurposed to make celebrities or companies seem trendy or progressive. Recently I saw someone write something that was basically like, "You know, people make fun of the corporatization of Pride, but actually companies have been much faster to give LGBT people rights than the government."

I guess there are a lot of people that think that way. To me, it's such an obvious thing that, if you have to be either the employee or the customer of a company in order to have access to LGBT progress, that's not real progress. That just creates more inequality. But I also understand the sentiment. I have a lot of trans friends for example that were able to begin transitioning because they worked at tech companies that fully covered all the costs. So it's a little silly for me to be yelling at them personally about Rainbow Capitalism. But the issue is that everyone should have those rights. So, I guess what I'm trying to say is that my goal is to keep the critique at a systemic level and not shame individual people.

What was the joke that you told that made you realize, "This is what I want to do"?

Two years ago, right after the Pulse shooting in Orlando, I went to an open mic literally the day that it happened. And I had just been alone in my apartment all day and extremely depressed, obviously. And then I wrote some very rough jokes that were basically about the media coverage of it and about the way that people—on social media specifically—react to tragedies. Which I think is one of the topics that's most ripe for comedy. It really is insane how people either try to make something about themselves or try to immediately have some alternative take on what's happening. And I actually ended up getting really great reactions to all my jokes.

And then, later on, I did a six-minute version of that set at the Comedy Studio in Boston. It was taped, and I submitted it to this competition that MoveOn.org did, which was called Laughter Trumps Hate, which, in retrospect, is a really misguided name for anything. But then I won the competition. So I think that was probably the first thing I had felt like I had accomplished in comedy that made me feel, "Oh I could potentially pursue this in a serious way." Both my parents immigrated here from Greece to get PhDs in engineering, and I was raised very much to think of the world in terms of clearly defined goals and school grades and winning awards and stuff. Like, my mom literally one time said to us, "All I want is for one of my kids to be valedictorian." [Laughs]

It did not. [Laughs]

I was wondering if you had thoughts about the way in which shade or reading people is both a way of fostering intimacy among queer people as well as something reflective of some sort of internalized homophobia or self-loathing.

I think that there are many conversations to be had about self-loathing in the queer community. But I do think that a little bit of self-loathing is not a bad thing. [Laughs] And I think one of the kind of consequences of empowerment culture is that it has made people resistant to any kind of self-critique. It is okay to be like, "Oh, I really shouldn't have said that. Let me rethink it." Rather than just, like, doubling down on everything under the guise of, "This is just who I am, and I'm going to be me." So I don't think it's bad to have a little bit of self-doubt. I think one of the most chic things you can do is to shut the fuck up. I realize I did not answer your question, which is radical in its own way.

What was a formative experience for you as a queer person in terms of conceptualizing your identity?

My parents immigrated here from Greece, but we actually moved back to Greece when I was 12. So I came to terms with my sexuality while I was living there, from the ages of 13 to 18. A lot of my early experiences with queerness were very different than those of people who grew up here. One of the things I distinctly remember is there were all these female Greek pop stars that were very widely perceived as bad. Specifically, this pop star Anna Vissi is kind of like the Madonna of Greece, in the sense that no matter what she does people will find a way to make fun of her or call her old or say she's washed up or whatever. And I would feel such a sense of pain when someone would shit talk her in my presence. Comedy-wise, the first person I saw be explicitly queer onstage was Margaret Cho, who was huge for me in high school.

Can you talk about how Living For It started?

It is a show that I co-produce with two other really wonderful comedians, Anya Volz and Kendall Farrell, both of whom I knew in Boston and now we all live here. We raise money for a different local organization every month. I have attempted to focus on immigration-related or queer-related organizations. We recently worked with UpRose, the Sylvia Rivera Law Project, Movimiento Cosecha, and the North Star Fund.

What was the impetus for creating a comedy show whose proceeds go to different charity organizations?

Well, I mean, I just think it's such a… It literally is a way to do the bare minimum.

Do I think comedy is activism? No. Do I think that I personally am braver than the marines? Absolutely. The idea that someone can go from being a conservative to being a progressive through watching, like, The Daily Show, is obviously absolutely asinine. But I think what comedy does best is help people realize that certain things that they take for granted are actually ridiculous, stupid, or evil.

How much of your act comes from, "I want to see if I can do this"?

I think something that motivated me for at least the first year of doing comedy was, "How much can I get away with a straight audience? Like, how explicitly can I talk about things like gay sex or some kind of a political thing from a queer perspective, or a very gay pop culture reference while also making, like, a literal Boston guy with a Red Sox cap laugh?" I moved to Boston in 2015 after two years of living in San Francisco, and Boston comedy has a lot of very straight audiences. I loved being like, "I'm gonna make you guys laugh, even though you think this isn't for you."