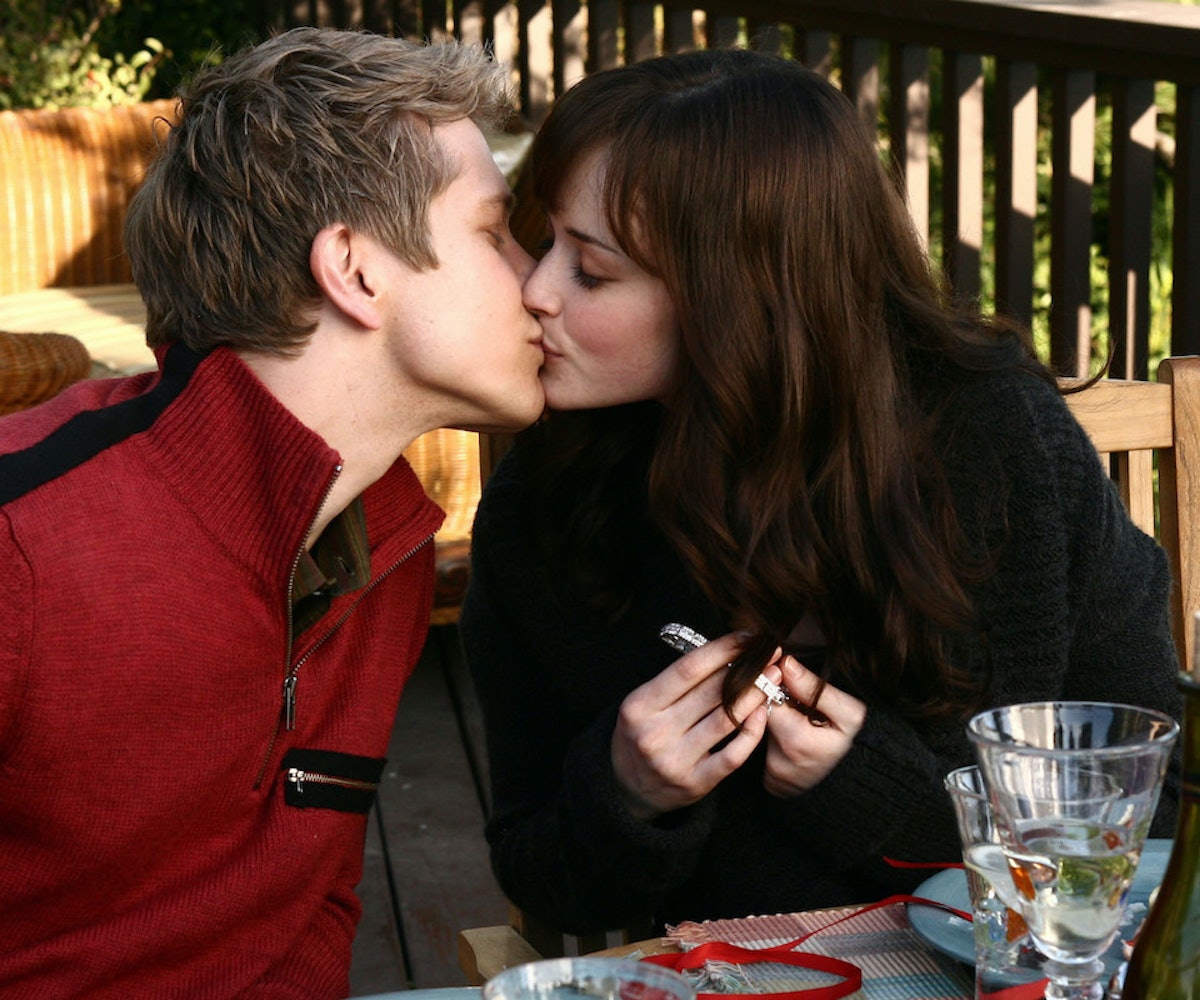 Whatever your thoughts on Valentine's Day, February 14 undeniably has the ability to make some of us feel less-than. If a person isn't romantically coupled up in the conventional sense, they are excluded from the pink foil-covered club. Even if you are in love, many of us have no desire to engage with the fanfare of this day and its obsession with romantic perfection. Which is why I'm grateful to Gilmore Girls and a particularly notorious Valentine's Day episode that reminds us no relationship is perfect — not even teen TV's iconic duo Luke and Lorelai — and serves as the ideal antidote to the day's potentially FOMO-inducing traditions.

In October, Gilmore Girls will turn 20, and despite the show's many highlights, the sixth season's universallyacknowledged low point, "A Vineyard Valentine," still haunts me. The episode, which originally aired on February 14, 2006, begins with a college-aged Rory inviting Lorelai to spend the weekend with her and boyfriend Logan at his family's vacation home in Martha's Vineyard. Lorelai is currently going through it in her relationship with a stressed-out Luke — namely (spoiler), turns out he has a previously undisclosed daughter — and is elated at the prospect of reconnecting with him in proximity to the spoils of New England.

Kicking off the "relationships can be tough" theme of the episode is younger couple Rory and Logan, who demonstrate that, although it might feel wonderful to act out an idealized version of yourselves away from a normal routine, it's not sustainable in reality. (In the episode that follows, for instance, Rory is blindsided when she learns that Logan slept with several of his sister's friends following a fight.)

During the latter seasons of Gilmore, there is a constant push and pull that's integral to Rory and Logan's relationship, so viewers know their playing house in idyllic Martha's Vineyard can't last. When Logan's formidable father, Mitchum Huntzberger, shows up in one of the episode's final scenes to lecture him about obligations to the family business, we learn that the reluctant heir to the Huntzberger dynasty has kept his impending departure to London from Rory. This neatly reminds us that without honesty and a dual commitment to working through challenges, a relationship will struggle to succeed.

Rory's characterization evolved gradually over the course of the series, and although change is a natural part of growing up, some fans would argue that Rory changed herself most — too much — during the Logan years. Everything from how she wears her hair to her clothing choices are different during their relationship, superficial shifts that signal deeper problems in their foundation. (This brings back super fun memories of altering my personality to endear myself to a guy — my high school boyfriend would have no idea that I didn't like football or Slipknot's back catalogue.)

"A Vineyard Valentine" is the only time Rory shows active interest in "hitting the gym" and preparing food, for example. In season one, she channels '40s icon Donna Reed and makes a traditional dinner for Dean in a play on outdated gender roles, but cooking is otherwise always a moot point in the Gilmore household and the girls' love of junk food and takeout the source of countless comedic beats. By contrast, in "A Vineyard Valentine," Rory is practically a different person as she and Logan prepare elaborate meals for the foursome, which is jarring for long-time fans.

Because Rory and Logan have a volatile relationship, it's admittedly refreshing to see her content with their harmoniousness, even if we know it won't last. Her attachment to Logan is emphasized by her need to always present as a unit: "we go to this coffee shop" and "we like to hit the gym when we're here." Most of us can relate to the pleasurable feeling of announcing our twosomes to the world, confident in that unique sense of security that only partnership can bring. That said, it's not just my Jess Mariano stan glasses making it clear that Logan's choice to buy jewelry for Rory is lazy at worst, basic at best. Knowing Rory, she would have likely preferred something meaningful and personalized rather than a necklace and bracelet. Moments in relationships where we feel like our other halves don't "get" us do happen, but a component of choosing to be together is a mutual understanding of who the other is as an individual. That's all any of us really want — to be understood and listened to, and it's painfully compelling to see this isn't the case with either couple at that beach house.

As a bro-code gesture, Logan donates one of Rory's gifts to Luke, who has chosen to opt out of Valentine's Day altogether, but this only serves to emphasize how tuned out Luke is to Lorelai's feelings. It's not about Luke spending money on material things, but giving your significant other something is a simple way to express love. Valentine's Day could have prompted Luke to remember that amidst the mundanity that can manifest within long-term relationships, it's important to celebrate your partner and let them know they are valued.

Lorelai is having a difficult time with the decision to postpone their wedding, despite biting her tongue and doing everything she can to make him happy. Luke's charming curmudgeon MO veers into hostile territory in this episode, as he complains about everything from the noise to Logan's nonexistent bad attitude, until Lorelai reaches a breaking point. Afterwards, it's a relief to see the pair share an intimate moment, talking and relaxing in bed towards the end of the episode. It's obvious Lorelai would rather enjoy many more moments like this with her fiancée than be furnished with some generic necklace. The best bits of companionship are those moments when you can put your icy feet on your partner during cold winter nights, or make simple things like trips to the grocery store feel fun. In "A Vineyard Valentine," Luke and Lorelai have lost this intimacy, and it's devastating to watch their implosion during the remainder of the show's Palladino tenure.

Whether it's comparing your relationship to other couples or serious life events that impact your union, the episode shows how much external factors can influence even the most committed relationships. "A Vineyard Valentine" also emphasizes how essential communication is, with Valentine's Day merely the catalyst that reveals where this skill lacking with both Luke and Lorelai and Rory and Logan's relationships. In the end, it's significant that the healthiest dynamic in the story is between mother and daughter, as sometimes our strongest and most fulfilling relationships are with people we are not romantically involved with. We should nurture these relationships, even if our culture largely does not. I for one will be video chatting with my besties this Valentine's Day, holding up a cocktail to the screen to toast us, this exasperating episode of my favorite show reverberating in my mind.