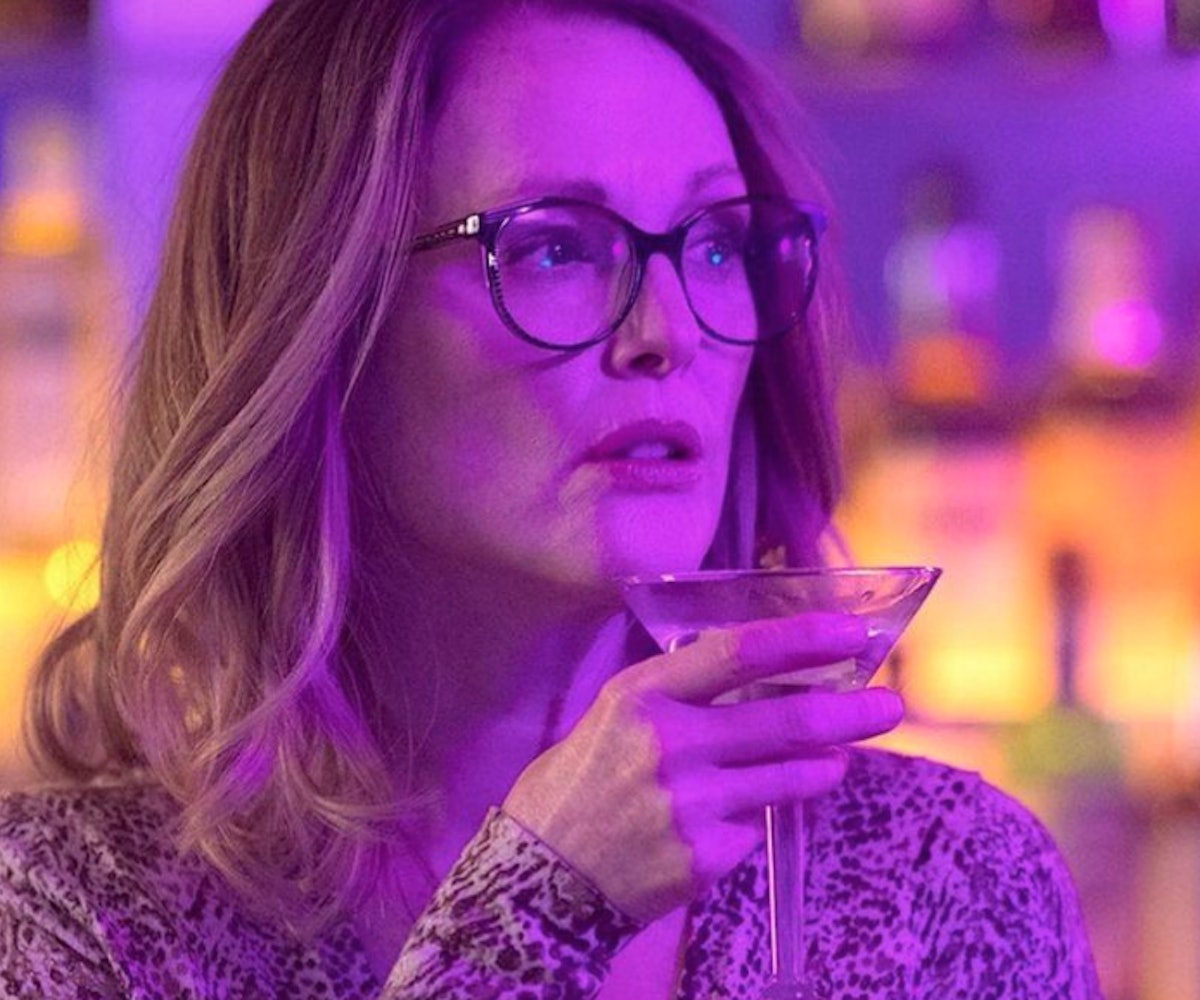 There are just a handful of narrative arcs women over the age of 35 get to play onscreen: They can be triumphant, they can be tragic, or they can be invisible. The latter group is comprised of women who are playing the "wife and mother" roles; they are there for support, often given in the form of the kind of inspirational quotes printed on T-shirts found at Southern truck stops, or maybe in their offerings of baked goods. The triumphant older woman is a Nancy Meyers specialty; she is funny and wealthy and accomplished and her kids love her and she has lots of friends, but victory is never found in those aspects of her life but is rather achieved once she finds love. Then there's the tragic. These older women are meant to evoke sympathy due to a combination of traits: They struggle financially, they are unfulfilled in their careers, their kids don't appreciate them, they are lonely. Maybe they have a cat.

And then there's Gloria Bell. In Sebastian Lelio's English-language remake of his 2013 film Gloria, Julianne Moore plays the titular character, a divorced woman in her 50s who lives alone in a small apartment, works at an insurance company from which she might never be able to comfortably retire, has two kids who never return her calls, and goes out looking for love in L.A.'s singles dancing scene. She doesn't have a cat, per se, but her neighbor's hairless cat frequently finds its way into her apartment, so she might as well have one herself. Gloria has all the makings of a tragic figure, especially after she meets Arnold (John Turturro) a man who's not quite divorced, dotes disconcertingly on his adult daughters, runs a paintball adventure retreat, and has Trumpian views on climate change.

But Gloria Bell isn't a tragedy, and Gloria isn't tragic; yes, she is sad, sometimes, and lonely, sometimes, but she is also happy, sometimes, and sexy, always, and free. She is human. She is a wonder. And Moore plays her with a quiet radiance, one that breaks free and becomes almost blinding at certain moments, like when she sings along, slightly off-key, to Olivia Newton-John and Paul McCartney while driving through the sun-yellowed streets of L.A.

Perhaps it shouldn't feel revolutionary to see a character like Gloria Bell, but it does. It's still so rare to see women treated as the nuanced, complicated beings that they are, no matter their age, but particularly after they've passed certain age milestones. Below, I spoke with writer-director Sebastian Lelio about what it was like to remake this film, the magnificence of Moore, the sacred feminine, and the timelessness of toxic masculinity.

What made you want to remake your original film?

My admiration for Julianne Moore. I wasn't necessarily interested in remaking my own film until she became part of the equation. We met, and there was this strange misunderstanding—I was told that she had seen the original film and loved it, but wasn't thinking of a remake, which made sense to me, but she wanted to meet with me. So I was very honored, I was staying in Berlin back then and flew to Paris where she was, and we met and talked for an hour. I was very flattered because she was talking so generously about the film, with a deep understanding of the character—she really, really loved it. And then I said, towards the end of the meeting, "Thank you, it's been an honor, and I totally get it if you don't want to be involved in a remake." And she said, "No, I'm terrified, but I would only do it if you directed it!" And then I said, "And I would only do it if you're in it." That's what happened. It was genuinely warm—from a place of pure admiration and enthusiasm.

A couple of years passed, and I made two films in the meantime, and I felt that it was a good time to release my own materials and try to resignify them. And of course, you know, just to imagine Gloria being channeled by Julianne was too tempting.

One thing I love about the role of Gloria is that it's rare to see a woman of that age who's not in a stable romantic relationship and think of her as being anything other than a tragic character. We're so trained to think that all single, older women are sad in the most insulting and reductive way. It doesn't mean that sadness and loneliness aren't a part of their existence, but what is so incredible about Gloria is that she is lonely sometimes and she is sad sometimes, but that doesn't make her tragic.

What makes that so interesting for you to explore as a writer and a director?

It's hard for me to intellectualize it. I can do it. Of course, I can make it sound like everything was a plan, but, to be really honest, the original forces behind the impulse to make these two films are coming from a place of pure intuition and excitement. There's something about taking this character that is somehow at the fringes of society and mainstream representation and putting her at the absolute center. This character would be a secondary character in a standard film, and I think what the film does is to turn this secondary character—who remains a secondary character in many, many scenes in the film, because she's not necessarily the center of what's happening, but the camera is on her—into the protagonist; so that's kind of the game of the film.

It was just very exciting to take this character that some would say doesn't deserve a film, but to tell her, "You are a film." And to do a portrait that is at times very tender, at times very hard, so we can see her lights and shadows. But on top of everything, I think the general attitude towards her, what happens between the camera and Gloria, has sort of a love letter attitude. And that was really inspiring for me and very moving and very mobilizing. I just followed that intuition.

Also, you often don't see women of that age having such physical roles; there's lots of sex in the movie and lots of dancing, and it feels very liberating to be reminded—even though we know it in our regular lives—that women's physicality doesn't just disappear when they turn 35. Or maybe that's more of an American thing, this refusal to acknowledge older women's vitality.

I think it's global, but in America, it's especially hard. Globally, in the Western world, we live in an unhealthy youth-oriented society. Everything's about younger and younger bodies. This is hiding a fear of that. It's a very immature and non-adult attitude towards life, because it keeps society being somehow childish. Now we live longer. Now, turning 60 doesn't mean that you will retire and go home and fill out crosswords forever. That's not the case at all. I see people that are 60, and they are going again through everything that could be related to adolescence—romance, growing up, coming of age, conflicts, passion, life. I think this film tackles that, and I guess it's a way of reminding myself that this is not going to be over, that passion and sex will still be there, and that it is kind of a myth, because of this obsession with youth, that at a certain point if you turn, I don't know, 50, you become less youthful, attractive, useful, etc., and I think that's not the case.

The film is set in Los Angeles, which, in some ways, is kind of the ground zero of youth culture and its perpetuation, and of people who get tons of plastic surgery. There's also an idea of sociability, because the weather's so nice, so you're probably always out hiking. But Los Angeles is really just this big city where you spend so much time alone because you're in your car all the time. Where did the choice to set this in L.A. come from?

Actually, that was her suggestion, in the first meeting with Julianne. And I think it was a great one. Of course, I knew L.A. and I've been there many times. I went back to take a look at it, thinking of the film, and it made a lot of sense. There were a lot of elements that were inherent to the original story that communicated really well with what L.A. had to offer. Not only because of what you were saying, that's where the myth of eternal youth comes from, but at the same time the social dynamics—the loneliness, the hours spent driving by yourself, the scenes of Gloria singing in the car became somehow even more intense or desperate, or tragic-comic.

The singing-in-the-car scenes were so great. What was the process like choosing those songs?

It's one of the aspects I enjoy the most. I love using music in film, and Gloria Bell is, in a way, a hidden musical film. The music operates in a way that is not dissimilar to the one that takes place in a musical. Because we have songs coming up every two to three minutes, and either Gloria is listening to them, singing to them, or dancing to them. The emotion that those songs bring mingles with the story, and the lyrics, at the same time, resonate with whatever she's going through. So it was great fun, and it's not a playlist that's cynical. It's not a guilty pleasure; it's music that I love or Julianne loves, and it was great fun to find a balance between what we were dreaming of and what was affordable—because it's always so expensive [to buy song rights]. It was a constant conversation with Julianne, because I wanted her to be really comfortable with what she had to sing, and I wanted her advice because, culturally, I wanted the songs to be precise in terms of being sometimes, very well known, sometimes less popular, but they kind of ring a bell... I was trying to find a good equilibrium.

What was something that surprised you about the process of remaking your own film?

It was a great pleasure to revisit those materials and to find whatever was universal about them and try to make that resonate in any culture in a new moment. Because, in 2013, I think the original film was slightly ahead [of its time]. Women being at the center is something that today feels absolutely natural, so I would say this version is timely. Which is great. Especially if you consider that in the meantime the world dramatically changed, shifted toward the middle ages everywhere, not to mention here. So suddenly, a story of a woman that claims her right to be seen and heard and to be respected became urgent again.

The character of Arnold is so emblematic of this time, but he's not so different than in the original. And yet, Arnold just seems like the stereotypical toxic man of today, but then I guess maybe that's just evidence that toxic men are always toxic in the same way.

I think it's timeless, and I think it's timely. Good films, I'm not saying that this is one of those, but good films have those two dimensions. They are timely, but it is their timelessness that makes them great. Yes, of course, you can analyze the film from the perspective of the archetypes, Gloria being the sacred feminine. And Arnold could be read as an agonizing way of understanding masculinity as well. You could play with that for a little, and I think the film offers enough space to think about those terms.

Gloria Bell is in theaters now.

NEXT UP
Entertainment
Everything Coming To Netflix In October 2022
Life
Julia Fox Calls Ye “The Most Lit Rebound Ever”
Life
Mia Goth & Ti West On Pearl, Their Latest, Sumptuous Horror Film
Life
The 2022 Emmys Had A Good Burger Reunion