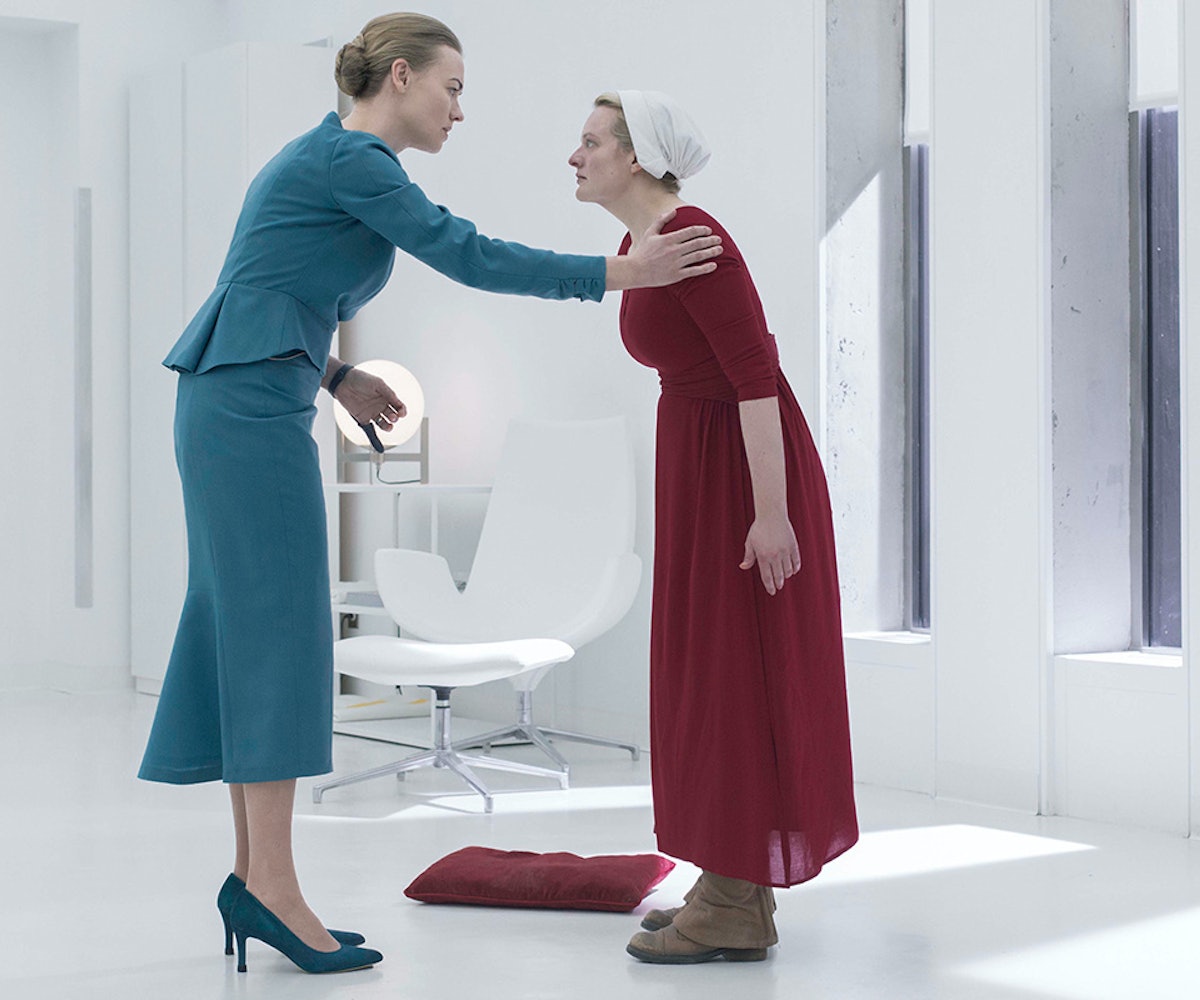 For a show whose plot divides its characters into very distinct factions, with near-identical uniforms that distinguish each, it may be surprising that The Handmaid's Tale costumes have made such a strong impression on the Hulu series' viewers. But the red dresses and capes—donned by the show's Handmaids, who are ritually raped and forced to bear children by the men who run the fascist government of fictional, dystopian Gilead—have not only imprinted themselves in the viewers' minds as a symbol of oppression, but have actually become something worn by real-life women when protesting political injustices ranging from the defunding of Planned Parenthood to draconian abortion bills to the Supreme Court nomination of now-justice Brett Kavanaugh.

"I am thrilled that there is something that is this powerful that people are using, because you can't ignore a sea of red women," says the show's costume designer, Natalie Bronfman. Especially not when Bronfman is in charge of outfitting them, which she has done since Season 1, first as a buyer, and then taking over from Ane Crabtree as costume designer this season.

While there's typically been limited room to play around with costumes on The Handmaid's Tale (because, again, uniforms), this season provided more opportunity than ones prior, thanks to several characters undergoing significant changes. For one, Serena (Yvonne Strahovski) literally needed a whole new wardrobe. "In terms of costuming, Serena has been most interesting because of her character arc. She starts out very depressed, of course, having lost her child. And her color palette is very dark," says Bronfman. "The fact that she set her house on fire, she doesn't have any clothing left. Shortly thereafter, she ends up wearing very frumpy clothing because that's given to her by the neighbors, essentially."

Following a visit to her mother, Serena returns with a new mindset and will to continue on, appearing at the Putman house in what Bronfman says is one of her favorite looks this season, a power suit. "She sort of said, 'No! I'm going to now fight for my kid, and I have to appear strong,'" Bronfman says. "I changed her from being very soft and depressed to start bringing her into sharper lines—sharp shoulders, sharp necklines, skirts, everything closer to the body. Almost, if you want to say, armor."

One of the other characters that gets a new wardrobe is Emily (Alexis Bledel), a former Handmaid who escaped Gilead at the beginning of Season 3, and is now in Canada. "I tried to get into her psychology of where she was and sort of what mental state she was in after having gone through all of the things: the circumcision, the colonies..." Bronfman says, adding that she tried to imagine what someone who's been "given a uniform where you can easily be singled out in the society" would want to wear after breaking free of this tyrannical policing.

"What I've tried to do is, envelope her in a cloak of anonymity now because she's trying to blend and not stick out and heal," she says. Earth tones and shapeless, long silhouettes make up Emily's new garbs. "A little bit of her styling comes from the fact that she was a professor before, so she would lean towards certain shapes and types of thing to wear. But now there are no longer shirts with a couple of buttons undone on top. We won't even talk about wearing a skirt because that would make her vulnerable."

The darkest color of all though gets introduced in the form of a new (to us) Gilead social class, Widows, who wear purple-black looks that mark that they lost their husbands and, as a result, status in the male-dominated republic. "I sort of see them as a sea of women that are really an army; when you are wounded, you are always handed a purple heart. And I think I looked at it sort of as, once you're a Widow in Gilead, what is your purpose? So you're no longer a Commander's wife, you're not fertile... you're given a purple heart because now you have to still continue to survive this, but you've also lost your own agency. You really are, I don't want to say useless, but you have no purpose," Bronfman says. "It's a very regal color, too. So, it's noble almost."

Those traces of an army appear in one of the most talked-about costume scenes of the season (so far), at the Washington gala that takes place in episode seven of the season. For that, Bronfman had to create 52 Wife dresses just for the background alone, with not one looking alike. Silk, charmeuse, velvet, and taffeta all appear, adding shine and opulence to an event in which the women of Gilead's upper echelon engage in actions—like smoking, drinking, and wearing luxurious clothing—that we haven't seen them do so far in public.

"The scene was fun because I had to really stretch my mind. I had to come up with a higher society having a gala ball, and all I could think of was, What happens every time the victors hoard all the spoils from a society? For example, when they steal paintings in the various world wars," Bronfman says. "I could really kind of play with things that we haven't seen in Gilead yet. Like, for example, sheen. In Gilead, all of the things had a matte flavor to them—there was nothing shiny. So now I could take out that variable and start bringing in sheen and pattern and texture and velvet and a little bit of lace, and we could put decorations like feathers and things we had never seen before, so that was quite fun."

Those decorations include incredible fascinators, inspired by Jackie Kennedy and Grace Kelly, that Bronfman designed with milliner Rebecca Fowler. "We do a lot of research of what the shapes looked like in this era. And the only reason why I say from that era is because that is sort of the quintessential, perfect wife. You don't bug your husband, he's had a tough day at the office: Here's your drink, honey. And you're always looking perfect. Throw a little apron over top, if I'm cooking my own dinner and don't have a cook. You notice that kind of feel to it," says Bronfman. "She would make a bunch of things like flowers and that sort of thing, and we would start to piece together what went with what. And then we were pulling out fabrics that corresponded with the various dresses, so that way we make sure they all fit together like a very tailored look."

While Bronfman went over-the-top for most of the characters in the scene, she kept Serena's look simple: a boatneck dress with elbow-length gloves. "A lot of people ask me, 'Why is Serena so much plainer?' Well because, in essence, the premise for her dress was she was going to Washington thinking that it's much more pious. She did not pack a ball gown," she says. "And I think, because she wasn't aware of how they behave in these balls—like smoking and drinking and checking out other people's tush—she wanted to be pious, so she didn't decorate too much. If you look at her dress, there is no decoration at all, and she has a very very simple fascinator, or hair ornament, so very discrete. Plus, also, you never want to upstage someone else's ball."

Elsewhere in D.C., the Handmaids are made to wear an additional accessory, too: a muzzle-like covering over their mouths. "They have in the back those claps, so the fur hooks, and that was sort of a throwback to shackles because you can hear them when they actually snap shut. It's almost like handcuffs. That's why we chose those—they have that noise to them, and the dichotomy of this little fabric with these big bolts in the back is just creepy," she says. She noted the effect these pieces had on actors: "When they put it on—they're all cut for the actors, custom-made so that they fit really well—they said that you automatically just stop talking, you put your eyes down and look at the floor... You don't see, you can't speak, you're muffled basically... Psychologically, you just stop talking. You're bound. Like whatever we were trying to do, it worked well."

This has an especially disturbing effect when you see the Handmaids lining on the National Mall outside the Lincoln Memorial, a "powerful" scene for which Bronfman had to create almost an additional 200 costumes. "Standing at the top of the steps, looking at all these girls was just breathtaking. It just took your breath away. I didn't even know what to say. And it was strong. It was truly like an army. Not something you can ignore," she says. "It's funny because that day, of course, the Mall was not closed off, so a lot of people thought we were protesters. And helicopters came out, and they were looking to see what we were doing." It says something about today's state of things that one has trouble deciphering between a real-life event and the filming of a show about fictional events.

"I can't believe we're still fighting over these things, in terms of equality and equal pay and, you know, our rights as women," says Bronfman, who says she is "honored" that the show's red robes have become symbols of unity for women in the real world. "Red is not just the color of love and lust. It's also anger and power and strength. It's the fire. It's the ultimate alchemy. Rebirth. Like you burn stuff down, and it grows back. So, it's so strong," she says. "Women are really doing the work, and I'm just happy that I can help give them something to use. I have people emailing me often. A lot of women from Brazil and Poland and other countries that always say, 'Thank you for giving this uniform to us because it makes us feel strong when we see so many of us,' which, I'm proud of that."

As for the people who create "sexy" versions of the Handmaids' look for Halloween or have Handmaid's Tale-themed birthday parties (see: Kylie Jenner), Bronfman, who wouldn't make the same choice, points out that "we live in a country where we have free choice" to wear whatever we please. "It's not like I'm angry at them or anything. I just look at them, and I think, I don't think you've really thought through what this is. I see these images, and I think, You don't really understand what this is about," she says. "I think it's sort of endemic of our society where we get everything in soundbites now. We don't actually read a whole article often. We just leave it at the top line, and then we move on because, our attention span now, we've been trained to just take in so much information in little tiny bites as opposed to a full article. I think that's really the problem."

As for the thing that causes the most problems for Bronfman personally on the show? "Finding 900 meters of the same colored fabric," she laughs. "I think that was the hardest part because all of the capes, not just the Handmaids, take at least six yards of fabric. So, when you're doing 250 capes... The quantities are enormous."