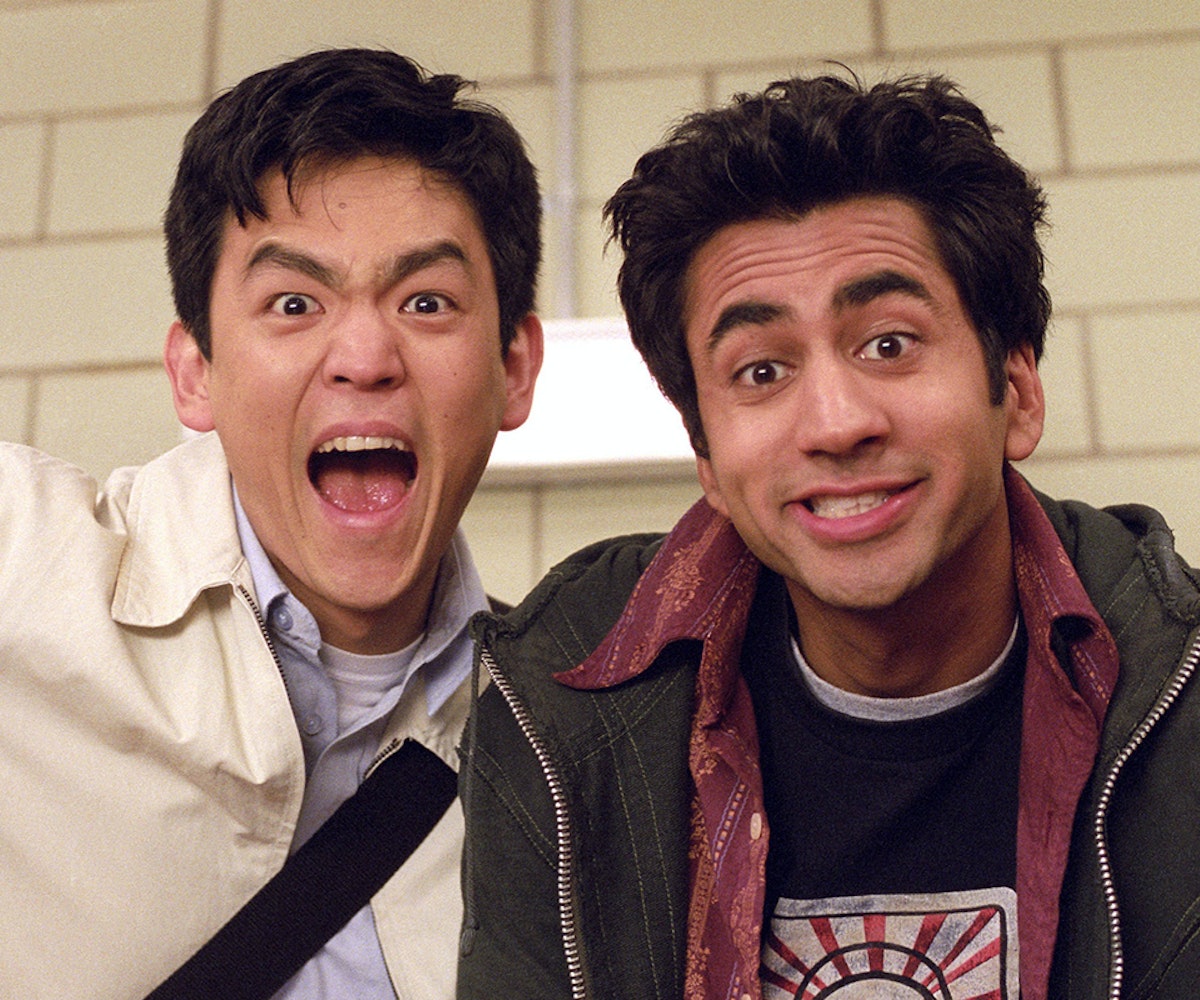 On the surface, 2004 movie Harold & Kumar Go To White Castle is about two guys who get stupidly high and start to crave "those tender little White Castle burgers with those little, itty-bitty grilled onions that just explode in your mouth like flavor crystals."

During their epic adventure to quell a severe case of the munchies, Harold's car gets stolen by a womanizing, high-on-X, Neil Patrick Harris (a genius cameo, only ever really bettered by Bill Murray's in Zombieland); the pair smoke a joint with a cheetah; and two potential love interests play a game of "battle shits" while relieving themselves in the ladies room. Yeah, this film has all the surreal toilet humor (one Jewish character, Goldstein, jokes that Katie Holmes' breasts are the "direct opposite of the Holocaust") one might expect from something directed by the dude (the late Danny Leiner) responsible for Dude, Where's My Car?

Yet look a little deeper, and Harold & Kumar is so much more than a stoner movie. Its existence is rooted in reclaiming a stale genre that had indulged far too much in dull white frat boys and desperately needed to focus on people who didn't look like Steve Stifler. It's about subverting the gaze of the American Pie era and letting studios know there was more than one type of comedy story they could tell.

"Whenever we saw Asian or Indian characters on-screen, they were nothing like our friends, so we thought we would write deeper characters just like them," the film's writer, Jon Hurwitz, told the New York Times in 2008. And for Hurwitz (and co-writer Hayden Schlossberg), Harold and Kumar was a bold step in a new direction.

The film begins with two conventionally privileged white comedy characters planning a heavy night out and plotting to dump all their work on the office's token nerdy Asian guy, Harold (who accepts with a dejected inevitability), in order to make it happen. When the pair both leave work early with massive grins on their faces, ready for a weekend of debauchery while someone else does all their work, they're given the thumbs up by a smiling parking attendant. In stark contrast, Harold is frowned at and treated like he's completely insignificant.

Kumar also accepts casual racism from his peers: namely, a group of god-awful, white, jorts-wearing teenagers, who drink Mountain Dew and love to shout "EXTREME" at one another. They even scream Apu's problematic "Thank you, come again!" at Kumar. This is something Kumar accepts as a normal part of daily American life.

Yet during the film's slick 90 minutes, Harold and Kumar work their way through this unequal world and somehow find inner peace. In one pivotal scene, Harold, locked up by an incompetent racist cop for jaywalking at 3am, speaks to a Black man who has also been arrested. His crime? He bought a book from Barnes & Noble. The latter tells the former: "I'm fat, I'm Black, I can't dance, and I have two gay fathers. People have been messing with me my whole life. I learned a long time ago there's no sense getting all riled up every time a bunch of idiots give you a hard time. In the end, the universe tends to unfold as it should."

But, Harold ignores the advice to keep his head down, opting instead to face the bullies head-on. He steals the Extreme gang's jeep, bumping Wilson Phillips' melancholic pop ballad "Hold On" while speeding off to finally arrive at everyone's favorite niche burger restaurant.

Suddenly White Castle represents something far bigger than just a fast-food mecca, and, in a weirdly inspiring moment, Kumar explains to Harold: "Our parents escaped poverty and hunger to come to America. They wanted a land that treated them as equals, a land filled with hamburger stands. This is about achieving what our parents set out for. Tonight is about the American dream!" Sure, this is a bizarre metaphor, but few films crystalize the power of immigration in such a warm, relatable way.

After the best friends finally sit down to eat their well-deserved 30 burgers, five large fries, and four Cokes, they bump into Harold's two white co-workers, who have spent the night doing drugs and sleeping with two women that definitely aren't their wives. Harold rips into them, warning: "I'm not doing your work for you anymore. If either one of you douchebags tries to do this shit again, I'll tell everybody what's really going on!" But, this monologue could just as easily be viewed as a warning to Hollywood itself, with Harold and Kumar telling the industry that Asian characters must feel real and stretch beyond clichés in the future. Their film has set down a marker, and there's no going back!

The fact Harold and Kumar both navigate careers (accounting and medicine) in exactly the kind of industries Chinese and Indian Americans are expected to thrive in, is also a clever way of reclaiming the lazy stereotypes present in Hollywood slacker comedies, and attempting to turn them into something more deep and meaningful.

Aside from this potent political message, Harold & Kumar is exactly the kind of comedy that speaks directly to anybody who has ever smoked an eighth of kush in one sitting and desired a bite of their favorite junk food. So often in stoner movies, the leads look like they're faking the funk, but Penn and Cho, who have a beautiful chemistry, have blood-shot eyes that suggest the set was filled with the thick smog of weed smoke.

Harold & Kumar Go To White Castle is the Citizen Kane of stoner movies, combining a prescient message about race with experiences to which only hard-core stoners will really be able to relate to. It bottles that feeling of being so high that even the most basic of tasks like, say, finding your keys, feels like climbing Mount Everest. In one underrated scene, Kumar realizes he's left his mobile phone back at the apartment. "Do you wanna run back and get it?" Harold asks. "No, we've come too far" replies Kumar, despite the fact they've only walked about 10 seconds.

The film more than doubled its $9m budget at the box office, winning critical plaudits, including from Roger Ebert, and inspiring a criminally underrated sequel where the pair poke fun at post-9/11 racism by escaping Guantanamo Bay. Now, 15 years after its release, the original movie, which was the first American R-rated comedy to have two lead actors of Asian-American ethnicity, feels quietly revolutionary. It set down a powerful precedent, creating more of an even playing field where comedies without white leads like Crazy Rich Asians and Girls Trip could also thrive. Perhaps more importantly, it rightly taught us that stoners will go to extreme lengths, even risking death, to eat what they crave.