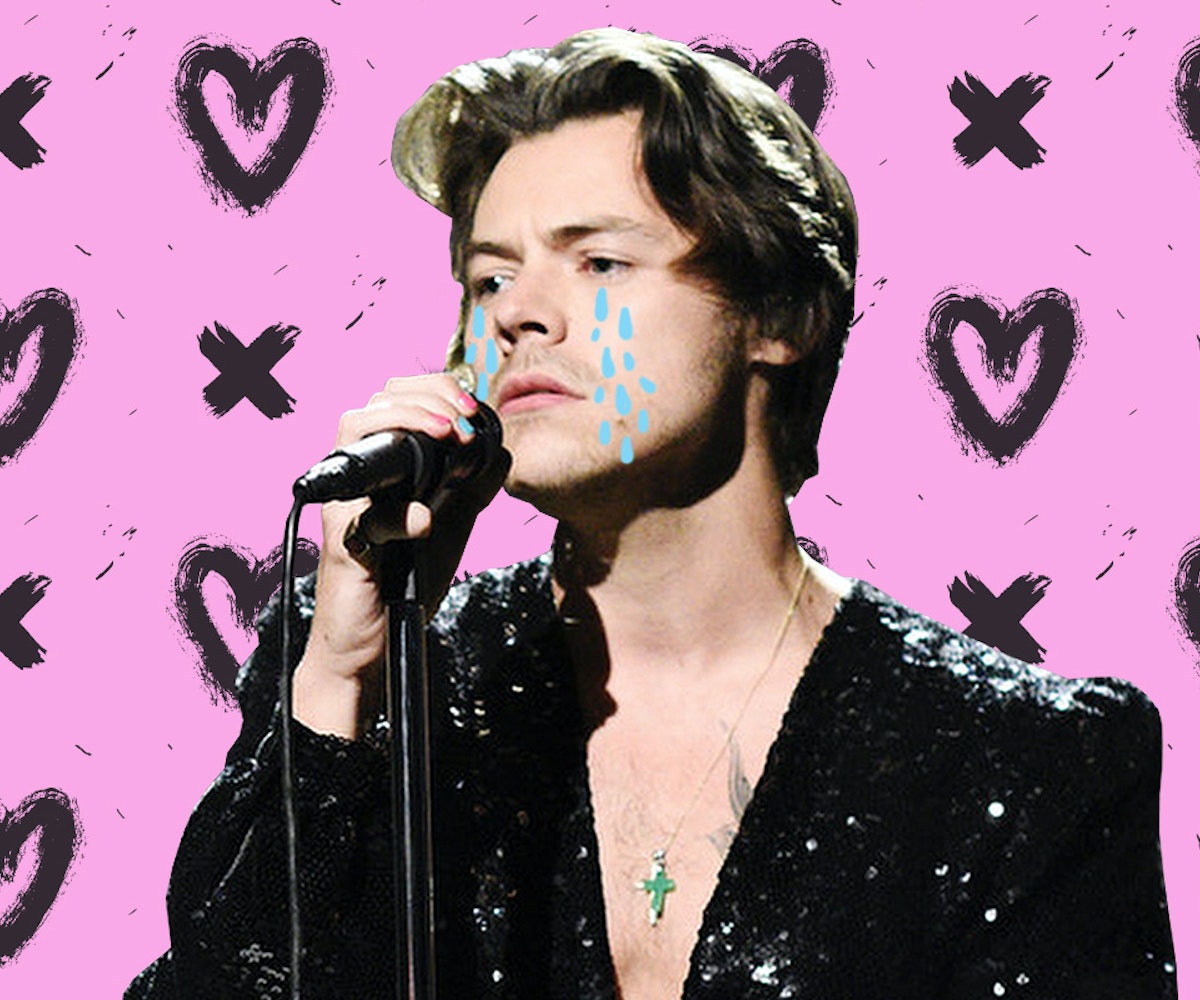 Harry Styles is very sad. Or at least, the version of him that lives inside the 12 songs from his album Fine Line, out now, is very sad. He's said it himself too, in an August 2019 Rolling Stone profileabout the record: "It's all about having sex and feeling sad." It cannot be stressed enough just how sad he is.

After taking the album out for couple of spins around the block, he was right, mostly. But Fine Line is also many other things. Styles' sophomore record does well to hide a lot of its swirling emotional turbulence among the textured weeds of its surprisingly adventurous production. He dips into folk and acoustic ballads; there's a song that leans a little reggae, before whipping back into lush Americana and groovy disco. His vocals undergo a good amount of warping and duplicating too: on album opener "Golden," his voice seems to amplify outward like one of those spinning, radiant kaleidoscopes. Sonically, Styles is the freest he's ever been.

But of course, all anyone wants to know is: just how emo is Fine Line, actually? Many people are speculating that most, if not all of the pining and torturous writing that makes up the record is about French model Camille Rowe, Harry's reported ex-girlfriend. (He didn't do much to mask the clues. Most obviously, there's a literal voice recording of a woman cooing in French at the end of the wistful "Cherry,")

To help out with the sleuthing, and after much scientific research with a test group of one, NYLON has deduced the twelve most emo lyrics from each song on Fine Line. One can only hope that this round-up will help Harry open the conversations with his therapist. For everyone else, get your Instagram caption-fingers ready — cause it's a doozy.

It is always a little heartbreaking to witness someone's vulnerability, especially when it's related to being alone — even though it surely won't last too long in Harry's case.

"I don't know if I could ever go without/ Watermelon sugar"

"Watermelon Sugar" is arguably the most positive song on the record, so it was tough trying to find the most depressing lyric. However, knowing that Styles is currently having to go without his watermelon sugar high, that's kind of :(.

"Adore You" is another song that straddles the line between euphoria and something more torturous, and Harry saying he'd walk through flames for the mystery object of his affection lands that lyric squarely on the side of the latter.

Someone please help Harry Styles' heart which cannot seem to find its way out of the abyss.

"Cherry" is a goldmine of sad lyrics (take note for your Instagram captions). Though the above does border on being a bit creepy — there's just something about the reveal of Harry still talking to his ex's friends — his missing her accent is so sighingly bittersweet.

Ouch. A big signifier of knowing just how badly you messed up is when you start not being able to even stand yourself. A runner-up for saddest lyric of "Falling": "And I get the feeling that you'll never need me again." Hindsight is 20/20.

"To Be So Lonely"

An eerie "Eleanor Rigby"-esque tone saturates Harry's storytelling in "She," which centers around a mysterious woman he can't get out of his head. It's dark.

"I don't wanna make you feel bad, but I've been trying hard not to talk to you/ My sunflower"

The way Harry wistfully ends this lyric on the endearing, "My sunflower"...that'll make your chest hurt.

"Staring at the ceiling/ Two weeks and I'll be home/ I carry the feeling/ Through Paris, all through Rome"

In the five stages of grief, it seems like Harry has finally gotten to acceptance. He can make it home now! But those moments of reminiscing can get ya sometimes, and it looks like he's still not fully in the clear.

For "Treat People With Kindness," Harry pivots to something ostensibly cheerier, but detectable under the surface is a still-strong current of emotional turbulence. It rears its head, finally, in the above lyric. I guess even Harry Styles can't escape the perpetual anxiety of the world ending.

"A test of my patience/ There's things that we'll never know"