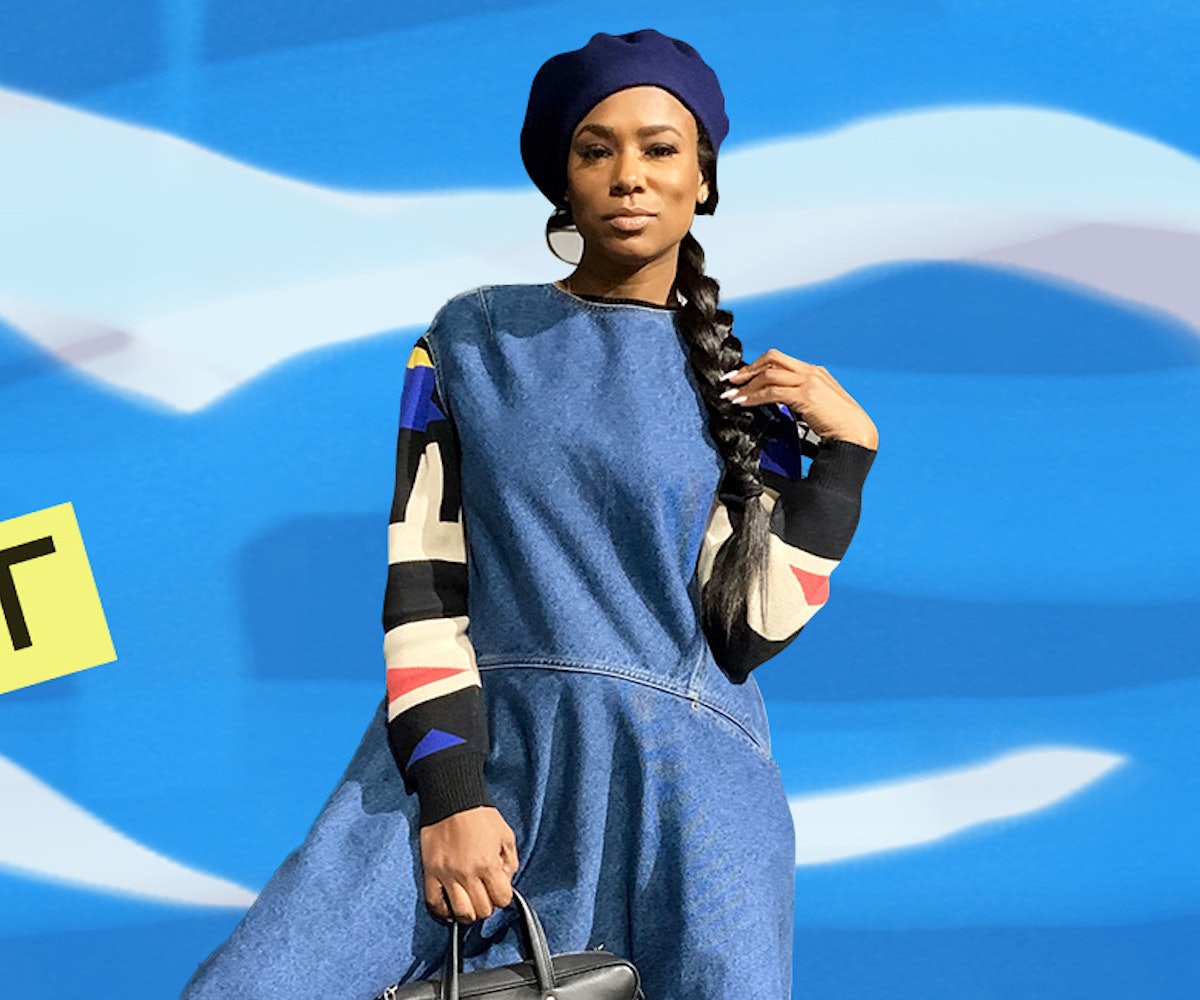 This is Off Beat, where we explore the careers of women who work in the music industry—just not on the beats and melodies.

If you think the worst part of going to a concert is finding your seat and hoping no one spills a drink on your shoes, imagine being the person who has to negotiate the contracts for artists, make sure the stage production is up to everyone's standards, coordinate talent arrival and deliverables, and strategize the marketing of the event. Now imagine doing all of that as a Black woman surrounded by men who aren't used to having to answer to women. You've just imagined Heather Lowery's job as the vice president of talent and touring at Live Nation.

Lowery uses her position to raise the profile of touring female urban artists. Lowery is building a platform called Femme It Forward, which is a series of events that celebrates the depth, power, and talent of women in music and entertainment. Live Nation has already announced two of the shows, with Cardi B, Teyana Taylor, and City Girls.

Read on to find out what it was like for Lowery to be groomed in the golden era of neo-soul, her thoughts on internships, and why she refused to use any of her industry connections when applying for jobs.

What does a normal day look like for you?

I try to get up at five every morning. It's a little challenging sometimes. I try to read, pray, meditate. I recently implemented that into my schedule. That's important in the beginning of my day to start it out like that. I try to work out most mornings, some days I just don't get to it. I get ready, get dressed. I get my son up and ready, drop him off at school, and I try to go to work straight from there. The earlier I get here, the more I can get done in my day. I'm more focused when I'm working from the office. I come in, take meetings. I try not to do meetings outside of the office because I feel like I get nothing done. If it's outside the office, I try to do a dinner meeting after work so that I can use my time wisely. After work, it's usually dinner meetings, shows, or events. A lot of times, I don't get to see my son before he goes to sleep at night. It's a sacrifice, but I try to make up for it on the weekends. I try to be home for as long as I can before he goes to bed, but sometimes it doesn't happen.

On average, how many events or tours do you oversee in a year?

Live Nation Urban is mostly big festivals and platforms. We do Roots Picnic, Broccoli City Festival, BET X, Summer Block Party, etc. Those are festivals. Then, I do a lot of colleges still. I don't know, I'd rather you not put a number in this [laughs].

How did you get your start in your career?

I decided that I no longer wanted to go to law school when I was a senior in college, I was like, I don't know if this is for me. I didn't know if I was doing it because it was what I wanted to do, or because my parents wanted me to do it. I ended up moving back home to Delaware. I got a job as a receptionist at a recording studio in Philadelphia. It was like, here I am: college-educated from Spelman College, and I'm a receptionist. I didn't care, I wanted to get my foot in the door. They didn't have a position available, so I was like, "I'll answer the phones! I'll do whatever." I just wanted to be there, and I knew that once I got in the door, I would work hard and work my way up to the top. By the time I left there, I was the general manager, running the whole place. That was during the height of the neo-soul movement. It was the home of The Roots, Jill Scott, and Musiq Soulchild. All of [them] recorded there.

Wow. What a time to be alive.

I know. When I look back at it, I was a part of so many great moments in music: with the LaFace Records era with Outkast and Toni Braxton; then in Philly, I was a part of the neo-soul movement with Floetry, Kindred [The Family Soul], and all of those artists.

You mentioned internships. I think sometimes that part of career-building gets glazed over, but it's important to be more transparent about it. Were your internships paid or unpaid? Did your parents help you, or did you have to have a second job?

I paid for my own college. I don't come from a family with a lot of money. My mom couldn't afford to send me to college, so I had to figure it out. I got student loans. My internships were all unpaid, actually. I had to get a job, get an internship, and go to school. I was a babysitter, that's how I made my money in college. I also had side jobs. I was a telemarketer. I helped the alumni association at Spelman—I think I got paid for that. I always had an internship and a job. All of my internships in college were unpaid. That knowledge, you can't pay for that. I think now, they have to pay interns, but back then there weren't many paid internships. I got all of that without getting paid for it.

So you were general manager of this studio, how did you end up in events?

I realized there was no future for me there. I knew that I loved music. At that point, I was going to a lot of live performances, like Erykah Badu. I never knew that I could connect to music on a deeper level through live performance, so I was really attracted to that side of the business at that time. Then I was like, I want to work at a major talent agency. I reached out. I sent out resumes. At that point, I had a lot of relationships and connections. Call it pride, but I didn't want any help. I applied without having any referrals. I applied to William Morris as an assistant. It was crazy being a general manager going to an assistant. Sometimes you have to be willing to start over, and that's okay. I had to start all over a couple of times in my career to get to where I am now. Here I am, thinking I'm big and bad. Even graduating from Spelman, I had to take a step down and do a job that I shouldn't have been doing as a college graduate. I had to take a step down and become someone's assistant to start on a new career path to get where I wanted to be.

It didn't work out [at William Morris]. There was no opportunity for growth there, so I just left. I didn't have a plan, I didn't know how I was going to pay my rent or pay my bills. I was like, What am I doing? I just couldn't do it anymore. That's when I went into artist management and handling the bookings for an artist that they manage. I would get calls from boutique agencies, and I was like, Wait a minute. They're doing this, and I could do it so much better. That's when I got the idea to start my company. I started my agency, Agency for Artists, back in 2005. I've had it for 14 years now. I went in to Live Nation Urban two years ago. [They] absorbed a part of my business—not the whole thing. I brought my college business over to Live Nation Urban.

A lot of what I did was that I had to find a niche for myself when I had my agencies. It was hard to compete against the major agencies because they had TV departments and film departments and commercial and digital, and I didn't have that. I was a one-woman army. I had to figure out how I could compete and stay alive and make a living with all of these major agencies that can offer the artists so much more. I created a niche for myself in the college lane, where a lot of the major agents relied on me for my college clients. I did colleges, casinos, and independent promoters.

I want to go back to something you said earlier. In most other fields, it's always encouraged to use the connections that you have to get jobs. I think that can sometimes work against women, though. There's a sexist assumption that women in entertainment aren't working for things and that their connections mean they've slept with someone. Do you agree with that?

I don't know if it's that I felt like I didn't need anyone, or that it's just hard for me to ask. It's hard for me as a woman, and a Black woman, to ask anyone for help. We want to do everything for ourselves. I think it was more that I was thinking someone else would judge me because I didn't do it the right way or the hard way.

Are there any challenges that you faced as a woman? Then on the flip side of that, how has it worked to your advantage? What are women uniquely bringing to the industry?

The challenge is just getting the proper respect and acknowledgment for the work that I do. That comes up in different forms. Whether it's a tour manager thinking that I'm a groupie, the agent not knowing how to speak with me, the colleague that won't look me in the eye because he's so used to dealing with men, it comes up in so many forms. On the flip side, I can only speak for myself and not all women, but I'm an introvert and an empath. I'm super-intuitive, and I use that to my advantage. I see things that most people don't see, I feel things that most people don't feel.

Do you have mentors or women that you look up to in the field?

I was talking to my peers about this, and a lot of us don't. We don't have a lot of women who took us under their wings and guided us, we had to figure it out ourselves. I don't have any one mentor or someone that I can look up to. My mom is that because she instills so many great values in me that I use now. Different people that I've worked for, I have learned different things, good and bad, that have guided me. There is no one person that I can say I look up to. If anyone, I can say I look up to my peers right now. The women that are killing it across the entertainment industry, my friends, those are the people who I look up to.