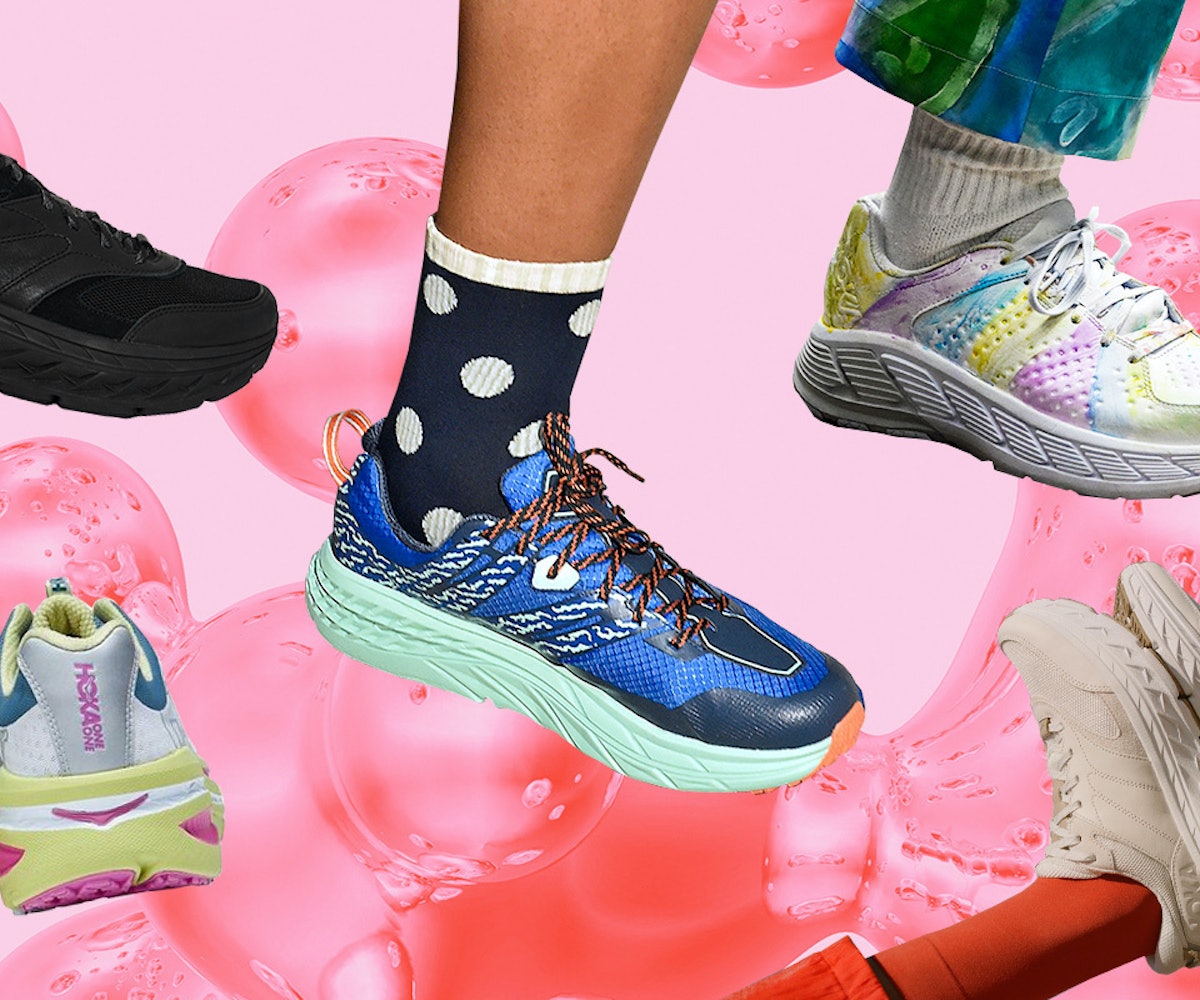 Our affinity toward dad sneakers and ugly-cute footwear isn't slowing down anytime soon. In fact, a certain athletic shoe brand has been seen on the likes of the fashion-savvy lately: Hoka One One. Founded in France in 2009, acquired by UGG-owning company Deckers eight years later, and known for its technical-focused performance footwear, the brand is a top choice for avid runners. But these days, Hoka One One can be spotted on fashion-forward sporty types and street style stars alike — mainly for aesthetic purposes; the functionality and ease are just an added bonus.

On Friday, Opening Ceremony released its debut collaboration with Hoka One One's Bondi 5. The heritage sneaker silhouette was revamped with premium leather — a first for the brand — in a minimal color palette of black and white. The partnership came about naturally. "As a company, we all fell in love with Hoka One One," Opening Ceremony senior buyer Alex Chirgadze tells NYLON. "Everyone, from CEO Carol Lim and her husband to our store staff, loves the brand. It's a great mix of fashion, comfort, and techwear."

Meanwhile, Outdoor Voices is continually restocking its OV Clifton in collaboration with Hoka One One, which launched in 2018. According to founder and CEO Ty Haney, the style's top colorways — cloud and pale blush — have been restocked more than eight times. "I was skeptical of the Clifton at first, but when I tried it on, I knew I'd never go back to another sneaker," Haney says. "I took them for a jog, and it felt like I was running on clouds." Outdoor Voices has since expanded its partnership with the brand with the release of its candy-colored Bondi B.

What makes these sneakers so appealing to the fashion set lies within the brand's very own design codes: the extra-cushioned midsole, dubbed "Meta-Rocker," ties in well with the chunky sneakers trend. Plus, its overall simple style serves as a blank canvas for any collaborator. In September, Engineered Garments released its own take on the Bondi B model, adorned in an array of Crayola-worthy colors.

Beyond official collaborations, Hoka One One has had its fair share of fashion cameos on the runway. Designer Nicola Formichetti dressed his models in Ultra Hi hiking boots for Nicopanda's Fall 2018 show at London Fashion Week. The following year, Sandy Liang opted for colorful Hoka sneakers at her Fall 2019 presentation during New York Fashion Week, while Hillary Taymour of Collina Strada customized her own pairs for her Fall 2019 show. She kept the DIY tradition going for Spring 2020, too, when she embellished the brand's offerings with lace, ribbons, and beads, and bedazzled Hoka's Ora Recovery Slides — her favorite style — with rhinestones.

Is Hoka One One well on its way to becoming the next cool dad shoe? All signs point to yes, but don't expect its own version of a high-end sneaker anytime soon. We have a feeling that the brand will stick to what it does best, all while relying on the fashion crowd to have fun with their beloved styles. "To this day, Hoka One One still has its focus on running and only running," says Chirgadze. "It isn't pretentious, and it offers amazing products. That feels right to us."