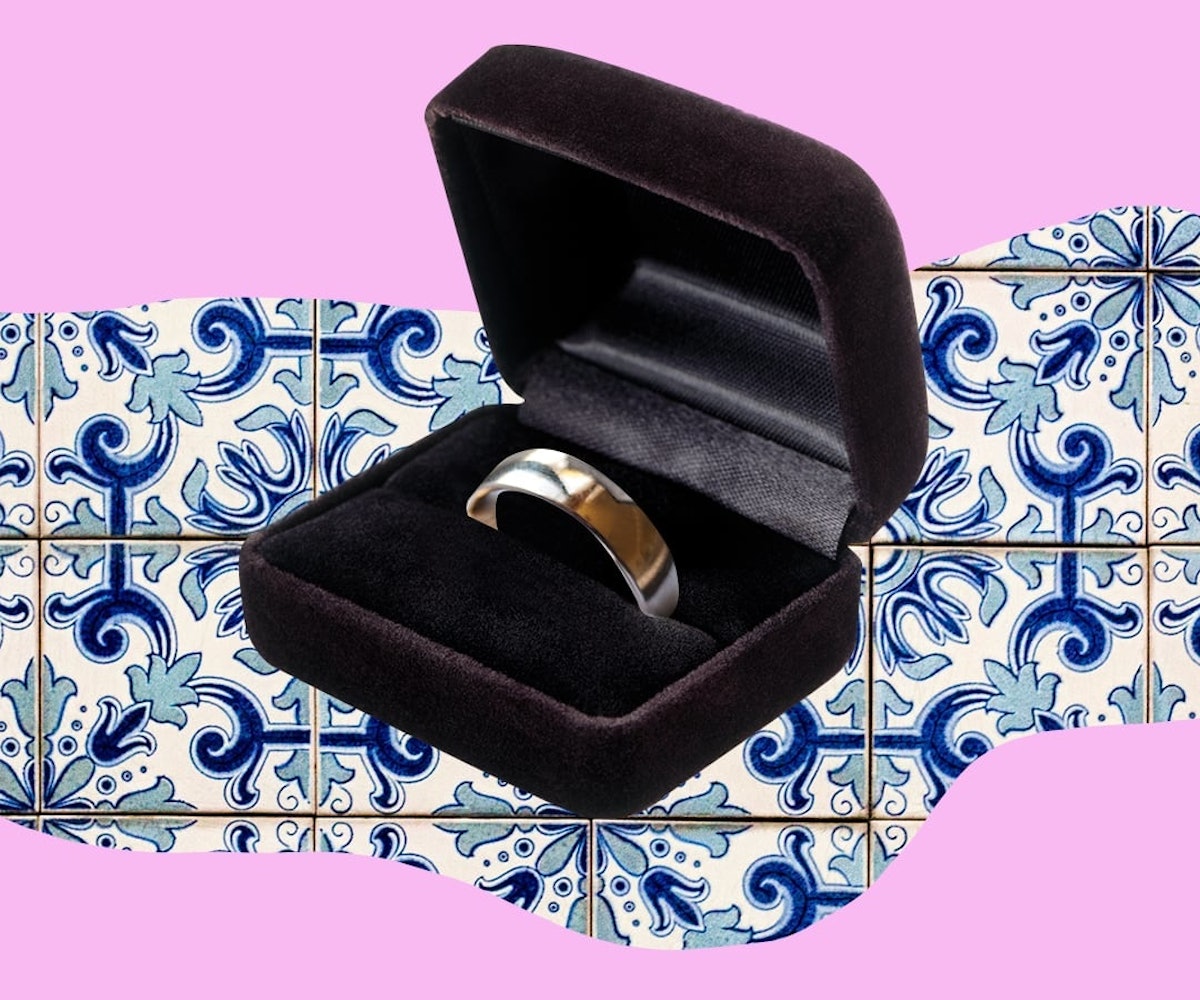 The idea to propose to my boyfriend came to me on a mundane June afternoon. I was by myself; Tony and his daughter were at dance camp and would return in the evening. This notion to propose was so fierce I didn't second-guess it and immediately began looking at non-traditional rings. I quickly found the perfect handmade titanium and lapis ring and ordered it. My plan was to bring it with me on our vacation to Portugal and Spain in September.

In the weeks to come, the ring—hidden in my underwear drawer—became an emblem for any interaction, negative or positive, between us. If we were having an argument, I fantasized about grabbing the ring and saying, "I even got you a ring, asshole!" and throwing it. If I was anxious, I'd project onto the ring that it was unattractive, the wrong size, sure that he'd hate the blue lapis, and what a pity it would be when he went to put it on and it didn't fit.

I got on the phone with a close girlfriend, who told me she'd also proposed. How hadn't I known that? Maybe I had known, but in my single days, I just didn't care. I wasn't interested in couples. When reading a book or an essay, I skimmed over the relationship aspects. They bored me then. Not anymore. And what were the odds one of my best friends, who I'd traveled all over with for years, had also proposed? I didn't know anyone else who had.

"I knelt in the snow with two engraved rings when we were walking our dogs one night. They were engraved with 'love of my life'."

Shit—my ring wasn't engraved. And I only had the one ring. I asked another friend:

"Should I have two rings?"

"I think you can do whatever the hell you want, you know?" she said. I called some jewelers to get it engraved, but since the ring was titanium and not silver, it was an expensive hassle.

"You have your whole life to get them engraved," my therapist said, calming me down.

I am a child of divorce, and in the past five years both my parents have remarried. Sometimes I consider how similar I am to my mother and how differently our lives have played out. She married my dad when she was 27 and had lived with him since age 21. Tony is the first partner I've lived with, and I'm 32. I've made a career of freelance writing, but my mom had a steady job and got a regular paycheck from the government. She had never lived alone before getting married; I'd spent a decade living with roommates and girlfriends until I finally made enough income for my own apartment. Needless to say, my mom had not proposed to my father—or to her new husband. My parents divorced when I was 14, flipping my life upside down, hardening my heart until Tony.

It's not marriage I'm scared of, it's divorce, which I know means I'm scared of both because if you never get married, you don't risk a divorce. "That's one way to live," Tony says to me when my way of thinking gets that way. "In fear."

Never once did it occur to me to "wait" for Tony to propose. Why give him that power? Why give men that power? For another reason to feel subjugated? "A woman asking a man is disrupting a sacrosanct power that men have held throughout American history," Professor Katherine Parkin says in the article "Why Women Proposing Is Still Rare." Besides my friend who told me she'd knelt in the snow to propose, I had no examples or models of a woman proposing, aside from Kristen Bell and P!nk. But I'd recently gotten some feedback on a character I'd written into a script for a television show pilot. "The Chloe character is so passive," it said. "She waits for things to happen to her instead of going after what she wants. She doesn't make decisions." I took that note and applied it, but to my life.

During the heatwave in August, we had a challenging couple of weeks. "Challenging" is an understatement. "Hellish" is more like it. I was experiencing a going-off-antidepressants chemical crash, the days were 98 degrees with 96 percent humidity. My period arrived, and I bled and cramped like I'd never bled and cramped before. Tony was having allergy attacks and couldn't breathe; I was waking up crying. I felt defeated by the heat, defeated by PMS, defeated by my relationship. I stayed in the bedroom with the curtains drawn.

We went to therapy to talk things out. "I'm not going anywhere," he said in therapy. "He's right here, working things out with you," my therapist said. Slowly I realized that the nightmare week didn't mean we had to break up, it meant we were able to stay together.

I packed the ring in my carry-on for our vacation to Europe.

It had been Tony who had made all of the other commitments to me. After hanging out just five times, he looked me dead in the eyes across my oak table and said, "I'd like to be in a relationship with you."

"That freaks me out," I said, unable to look at him.

"Why does it have to end?" he countered.

Just a week later, he told me he loved me, and I felt exactly the same, and a week after that, he said he wanted to have a child together. I'd been thinking the same thing, and I imagined us carting the baby back-and-forth between our apartments.

"If we're going to have a baby, we have to try living together first," he said.

"That scares me," I said—not the baby part, but the living together part. But when my lease was up six months later, I packed my boxes and moved two blocks away to his apartment, which coincidentally is across the street from where my dad lives—where I lived off and on in my 20s. "You're barely moving," Tony said. "You're coming home."

Before meeting Tony, if I was going to date a man, my requirements were that he'd been through a divorce and had a child. On one of our first dates, I saw the book Spiritual Divorce on Tony's shelf, one of the dozens of details of how I knew he was right for me.

"I don't want to go through another divorce," I'd tell him from time to time.

"Can you say that same statement as a positive?"

What if he said no? What if he said, "I'm touched, but I want to work on the relationship more, first." I couldn't imagine this happening, but I couldn't imagine anything happening as it was a situation I hadn't imagined and couldn't prepare for. It was the ultimate free fall. Deciding to marry felt like exposure therapy to what I am most afraid of, I realized. The only way to heal would be to go not around, but through.

I'd read that when couples argue, they should be standing or sitting at the same level. One should never be standing over the other. I took this tip into consideration when planning my proposal, I wouldn't get on one knee, we'd be eye to eye.

On our first full day in Lisbon, we were jet-lagged and giddy. The Alfama district where we were staying was all cobblestones and hills, romantic without even trying. That night, we dressed up and took photos of each other in front of muraled walls on our walk to find a restaurant. I remember thinking, This will be the last photo of me as a non-engaged woman. My expression looks happy, and a little afraid.

After reading about restaurants with "the best sunset view in Lisbon," I had three ideas of where to go, but the first one was closed, the second was full, and the final one didn't look good to us. We'd walked a few miles out of the way at this point, and I felt dumb. Finally, we found a hole-in-the-wall spot that was romantic, and while we ate our cod and olives, live Fado music played as the lights turned down. Across from me, Tony kept telling me he loved me, and I considered handing the ring to him in the dark restaurant. But I had one rule for my proposal: I wanted us to be outside.

Walking home at around 10 that night, Tony remembered we needed toilet paper and went to a corner store to grab some, coming out with one of those black bodega bags. We were walking through a little courtyard that had one orange tree with green fruit poking out of a square in the pavement, tiled buildings, and potted plants, we were sort of trudging, still jet-lagged. Tony was about to go down a long narrow staircase to our Airbnb, and I knew if I didn't do it now, I never would. At the last possible second before his foot hit the stairs, I said, "Let's sit on this bench for a minute. When do you get to sit on a tiled bench?"

Nerves. Heart flutters. Adrenaline. He put the bag of the toilet paper on the ground.

"Why don't you smoke a cigarette?" I said, normally not a fan of his casual smoking.

He lit up, and I handed him my phone. The letter began, "Dear my love, I know I am moody." It went on to list our idiosyncrasies, like his eating 50 Altoids a day, and leaving receipts that don't need to be saved all over. Then the letter moves to the positives, and ends with "Will you marry me?"

"Will you read this thing I wrote today?" I'd written it quickly, basically on our way out the door. I wanted it to be stream-of-consciousness, urgent, and authentic—not poured over and perfect.

He began reading at what seemed like a fast pace. He was smiling. He said, "Oh my god," once and then kept repeating what I'd written at louder and more intense volumes. His body started to shake, and mine shook in response, he was crying and I was crying the most joyful cry I've ever cried. We kissed and I slipped the ring on his finger, a Cinderella moment in reverse. I felt more empowered and alive in that moment than ever. Still shaking, we walked to our Airbnb and uncorked a bottle of red. Tony called his parents and then my mom, saying, "Your daughter just proposed to me."

A week later, Tony looked me dead in the eye and told me what I'd done was very brave. We were in a cab driving from downtown Barcelona to the airport. We held hands, his now adorned with the lapis ring, and my fingers, plain, feeling full of opportunity.

When we landed back in the States, cranky after our eight-hour flight which served zero food, we got into a trite argument first about what kind of pizza to order, and then, when we got back to our apartment, another about where the weird rotten smell was coming from.

It felt exactly like coming home. A couple of months later, on a walk with my mom, she was thinking back about her first marriage, and she said, "I think I was the one who proposed."