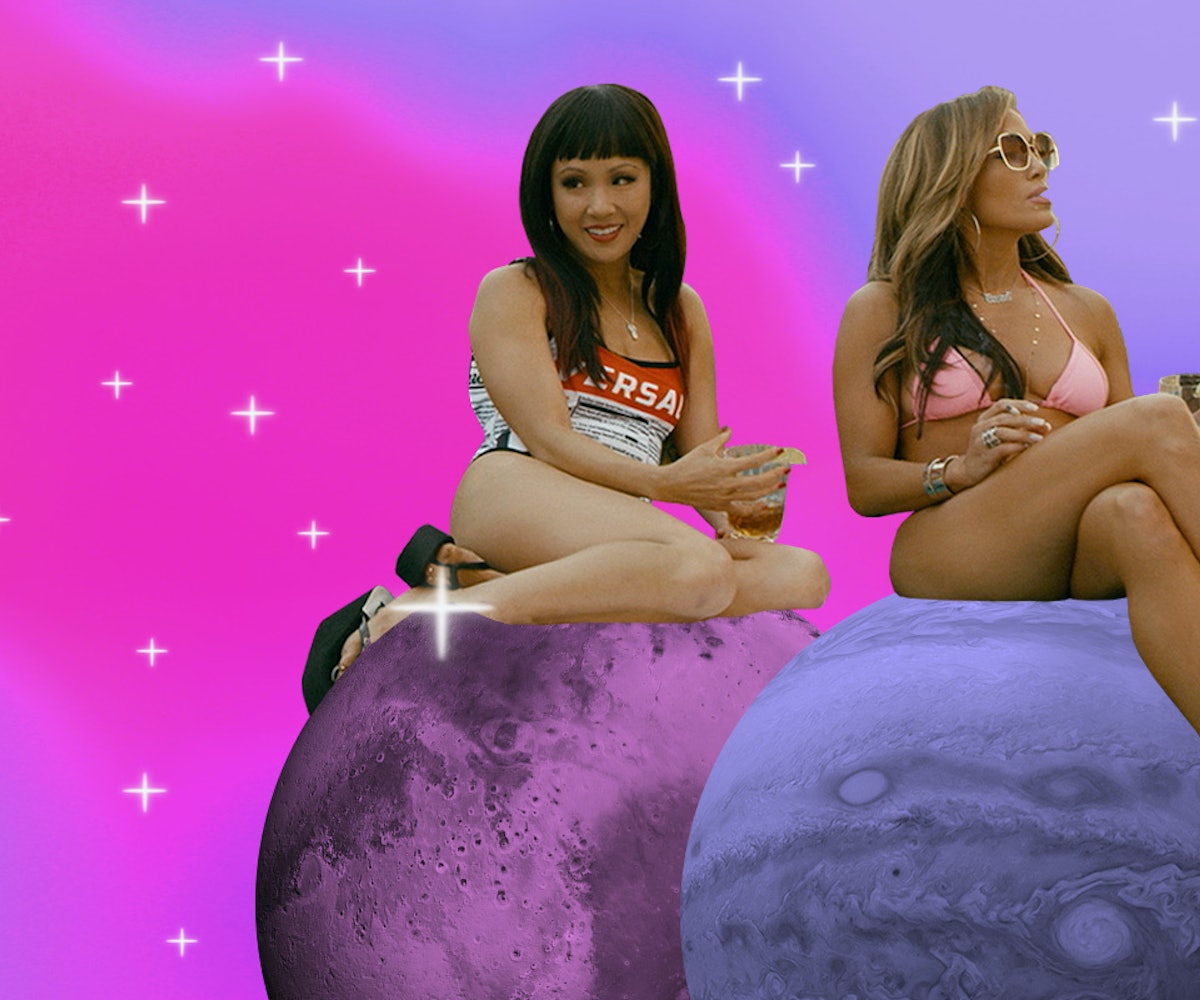 When NYLON asked me to do an astrology writeup on Hustlers, I really thought it would be about the women whose faces made up the posters for the movie. I went to the theater fully expecting to take mental notes on Destiny (Constance Wu), Ramona (Jennifer Lopez!), Annabelle (Lili Reinhart) and Mercedes (Keke Palmer). Some posters even boasted Cardi B and Lizzo, not to mention Julia "Save The Last Dance" Stiles. Surely, I surmised, there would be enough women to get at least half the zodiac covered. As someone who loves sex workers, and once bought a J.Lo tape with her middle school babysitting money, I was pumped. But, more than halfway through my popcorn and the movie reel, groaning in unison with my queer friends as Ramona and Destiny clutched each other tight, I knew what I needed to write about: the heartbreaking thwarted love between a Libra (Destiny) and a Cancer (Ramona).

For many viewers, Hustlers cast its hook the moment Ramona got on the pole to Fiona Apple's "Criminal." (And, I wouldn't be who I am without taking a detour at this moment to share with you Apple's response to the use of her song: "Listen, I just want to say: I would give my song to Jennifer Lopez to dance to for free, any day, any time... I really want to see the movie. If I were a person who actually left my house, I'd go." The rest of this interview details Fiona's obsession with J.Lo's butt and commitment to sending two years of royalties to refugee organizations.) Yet, for me, the moment Ramona opened her fur coat to Destiny and wrapped her up in its furs was the moment I knew I was going to get wrecked.

Long before Ramona casually mentioned her July birthday, long before Ramona became the godmother to Destiny's baby, I knew she was a Cancer because only a Cancer could do what Ramona did: make women feel taken care of while convincing them to wreck their lives. Ramona's energy is all cardinal water, sensitive and bossy at once, the kind of woman Destiny feels she can ask for help even if Ramona is the head bitch in charge. And, what about Destiny? Pretty but not brash, soft-voiced when it suits her, and with a knack for knowing exactly who to connect with to climb ranks—who else but a Libra?

Cardinal air, Destiny's go-getter attitude is as relational as it is strategic. She wants to do right by her grandmother, by her daughter, and by Ramona, too. Plus, she wants nice things like all Libras do. What does Ramona do to convince Destiny to join her scheme? Go off on a monologue about American injustice. What does Ramona the Cancer tell Destiny the Libra about her new Louis Vuitton bag? "There's no such thing as too big a bag." It's a classic Cancer femme mommy bird spitting into a Libra baby bird's mouth scenario.

It's clear from the moment these two women share a cigarette and a fur coat under one starry sky that they love each other, but the movie goes on, adding wood to the fire. The queer eye is baited along, rapt as they strip each other while performing for the male client gaze and sighing as they shift into different forms of intimacy alone—giving each other thoughtful gifts and holding each other close, sharing family holidays. I can't count how many times, during the movie, I leaned over the armrest to my femme friend and whispered, "What if they kissed?" And, I know you might say something like, "Well, however loosely, this is based on two real women," and I would like you to know right now that I won't care about a boring thing like a true story.

The TRUTH is that in real life, at the time of the events portrayed in the film, the woman who Destiny is based on no longer had a living grandmother. And, although I DO admit I found it romantic, the scene where the two bake up their MDMA + special K potion appears to be fictional. If a movie could make up a serious scientific thing like a drug kitchen, why not a silly nothing thing like a kiss between two powerful women in the prime of their lives? The queer bait struggle is real, dear reader, and the only thing harder than getting American cinema to give viewers queer content (without making an arthouse film or a thriller) is getting a relationship between a Cancer and a Libra to work out. What with Ramona doing her water-sign bit to put her money on unreliable girls and Destiny doing her Libra bit to recognize an imbalance and make a choice that felt fair to her and like a betrayal to everyone else. Star-crossed, these two cardinal businesswomen had a doomed love and a doomed hustle. But, wasn't it beautiful before the fall?