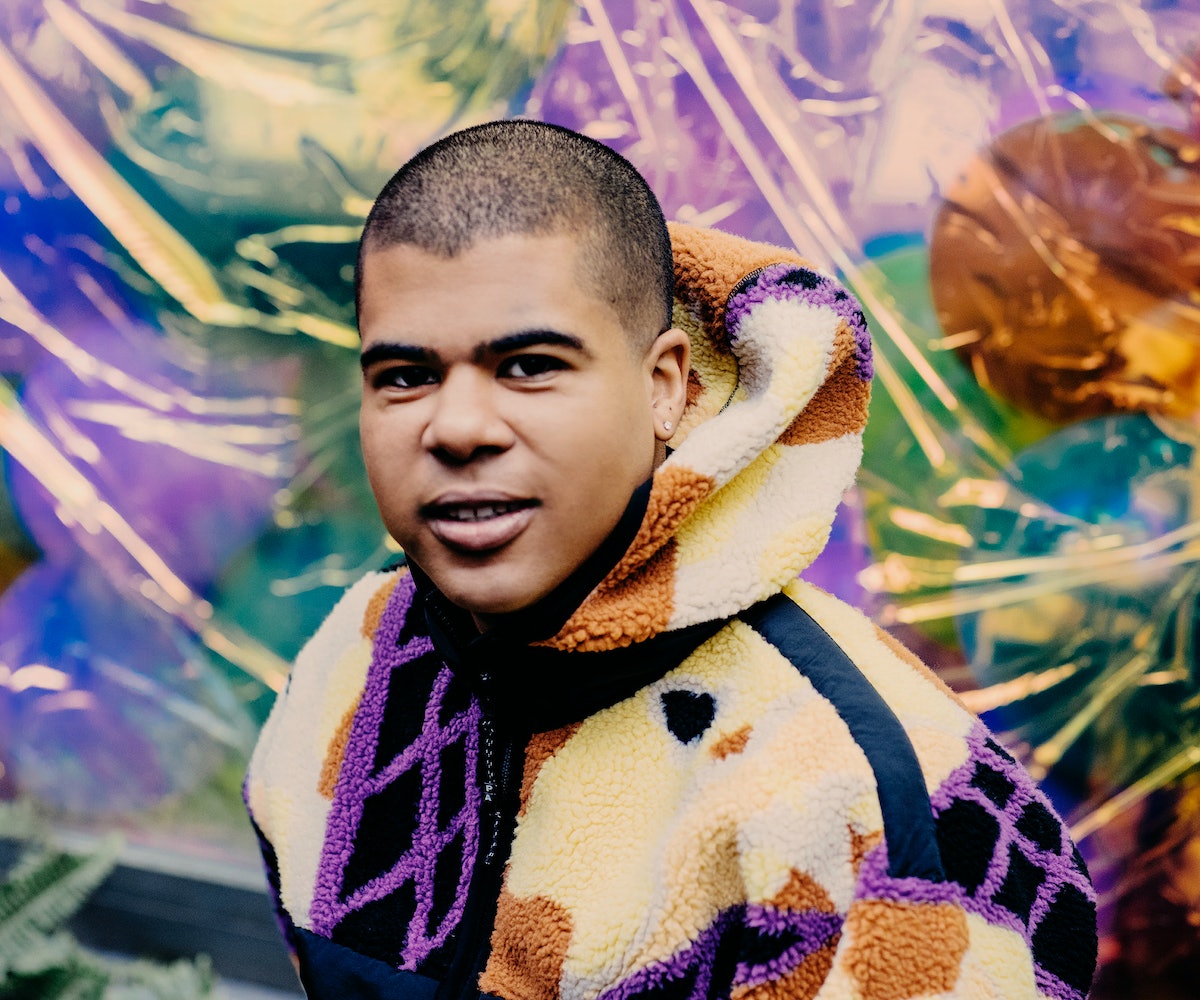 In 2017, Atlanta-based artist iLoveMakonnen (or just Makonnen) had already experienced exhilarating career highs and disappointing lows. Drake had hopped on a remix of his viral hit "Tuesday," and then signed him to his OVO Sound label in 2014. Hits like "I Don't Sell Molly No More" and "Look at Wrist" on his first album, I Love Makonnen, put him on track to be the next best thing in rap. Makonnen was part of a class of rappers and producers who were expanding the trap genre to broader audiences. But problems with OVO led to a delay in a follow-up album, and so he parted ways with the label and, later, announced a short-lived retirement from music. Then in January 2017, Makonnen tweeted that he was gay.

While fans and followers voiced their support for him, there was a loud hush from the hip-hop artists he'd been so connected to in the previous years. It was as if none of them wanted to be associated with a gay artist. That is, nobody except Lil Peep, who was one of the first people to reach out to Makonnen, offering his support and asking if Makonnen wanted to meet up. What followed was an intimate friendship between the two, that helped Makonnen heal from some of the rough patches—and there have been many—in his life. But less than a year later, Peep would be dead.

Below, I talk with Makonnen about his friendship with Lil Peep, as well as that fateful tweet; Martha, the beauty school mannequin head that has become synonymous with his brand; and how he really feels about the people he feels turned their backs on him.

Can you tell me about Martha and why she's so important in your imagery and your branding and stuff?

Martha was from when I was in beauty school, and I had to, you know, make my doll one-of-a-kind, and make it into my doll for the class and stuff. And then, so I was doing that, and I was getting creative with my doll and then with my music, at the same time, I was working on that, and I was like, Oh, I don't have a model for my artwork. And at the same time, [the school was] like, "You need to take pictures of your doll to show the hairstyles." And so I just started doing these high fashion pictures with the doll outside and in water and leaves and all types of stuff. And I was like, Oh! Martha is like… she's a celeb! She's a top model! And then I started putting her on the cover of my work, and I was just like, Oh yeah, this represents me. This is me. And the face is kind of… people say it's scary, but the whole overall thing is, don't judge on the outside. Take some time to get to know somebody on the inside.

How did you end up at beauty school?

My mom was always in the beauty industry and cosmetology. She was a nail instructor for almost all my life, so I've always been around it. And then I got into my legal situation where I was on probation. I had to do something productive with my time, so my mom gave me the idea of coming to beauty school and learning a skill and a trade and how to build confidence in others and have fun in socializing.

You have a flashy sense of style. Did your mom or your experiences in the beauty industry influence that?

Yeah, definitely. My mom was always showing me artists from the '70s and the '80s and a lot of costumes, and just the theatrics of arts and stuff. Then in beauty school, you also have to have some sort of creativity and flair in there and bring flamboyance and all these types of things to capture the eye.

I want to talk about when you came out in 2017. Why did you feel the need to send that tweet out?

I just wanted to be, I guess, more open. And then, I felt like the times that we're in… people need to be braver. People need to be more open and have a sense of bravery, because I feel like a lot of people are scared. [I think it's important] especially for the younger generations coming up. They don't really have many real leaders, you know?

They just all follow one after another. And so it's like, they're following things that they may not fully be themselves, and so they're confused. I just felt like I've seen a lot of fans, I've seen myself, people before me, everybody sort of dealing with this. I was in a position in the industry to make a larger impact for more than myself. So I just wanted to take it into my own hands and share it with my fans on Twitter, rather than trying to take it to some publication or some TV show and be like..."Oh yeah, I'm out I'm gay. Everybody celebrate this."

I just wanted to be able to be an Aries and, you know, break through that, and help get some inspiration to a lot of the younger people that are dealing with some of the same issues.

A few people reached out, but most people just kind of ignored it. Most people in the industry just turned the other way to it. I guess they were kind of like, "I can't be around it," because that would end up making them look different. So a lot of people have to withdraw from being around me as closely as they were. The fans, I think, embraced me more, especially younger fans. They were very happy and excited and accepting about it. But I feel like the biggest issue may have came from people around my age group or people a little older than me.

Tell me more about your relationship with Lil Peep. How did you guys meet?

I actually met Lil Peep in person right after I came out as gay. He was one of the artists who reached out to me and was like, "I love you. I'm a big fan always." [He] was like that: supportive. And I was like, "Oh snap! I'm in L.A., let's meet up. I've been seeing you do your thing." So we met up. We have a mutual friend, and we went by his house. We all hung out and talked and vibed and just got to meet each other. Then in July, my manager was in London, and Peep was being managed by someone who my manager had a friendship with. They ended up meeting, and Peep was like, "Tell my manager Makonnen's my favorite artist. I was about to work with him." We got on the phone, FaceTimed, and I was like, "Oh! When we link back up in L.A., let's get up and make some music. Let's try to do some stuff."

Why did you have a broken heart at that time?

Oh, I always had a broken heart since I was a child.

[Laughs] It just keeps going on and on. At the time, I was sort of seeing somebody that I guess wasn't seeing me the same way I was seeing them. So there was a little confusion, and then I was a little down. Then I had a really close friend of mine who was with me from Atlanta to New York to L.A. We were working together at a restaurant at the InterContinental in Buckhead. Then [I made] "Tuesday," and he got to come with me and assist me. He ended up passing away in May of 2017, and then I got back at it with Peep in July of 2017. So that was very heavy on my heart at the time as well. And I told Peep about that stuff, so we were becoming friends and going through the motions.

I can't even imagine what that was like for you to have to face Peep's death so soon after that. Have you found other artists to collaborate with on that level today? Is there anyone who are you really vibing with?

I've kind of just been on some solo stuff. I haven't really been in the studio with many artists from Atlanta. Right now I'm just focusing on my stuff and trying to get my stuff together. I've worked with producers, and that's where my vibe's been at in the studio, but as far as with other artists right now... I don't know. I haven't really found another artist that I can connect with… I've felt like I've stepped into a new world of art, especially since coming out as gay. Expressing myself in these ways, a lot of the artists that I used to work with aren't trying to go in that direction as far as, you know, expressing themselves and art like that. I feel like we've had our time. If they want to come around and do something again, I'm always open. But, you know, I'm going in my own direction right now.

Do you ever regret coming out?

Nah, I don't regret it at all. I mean I'm a man, and as a man, you do real things. If [people] can't understand that, then that's on them. I have to be Makonnen, and one day when y'all reach a maturity level the same as mine, we can have conversations. But I am very hurt over the treatment and the resentment or whatever. Y'all can't fuck with me no more, especially after I was in Atlanta and came to fuck with all of y'all when none of y'all were getting fucked with at all. I was really a spearhead over there, coming to this studio to that studio, linking artists with producers. Now all these people got successes together, and they've all reached new heights, but nobody can call me to even say: "Thank you... We fuck with you... How you doing?... I hope all is well." Nothing. It's just like, damn. That's how we kicking it? I guess that's how we gonna be kicking it.