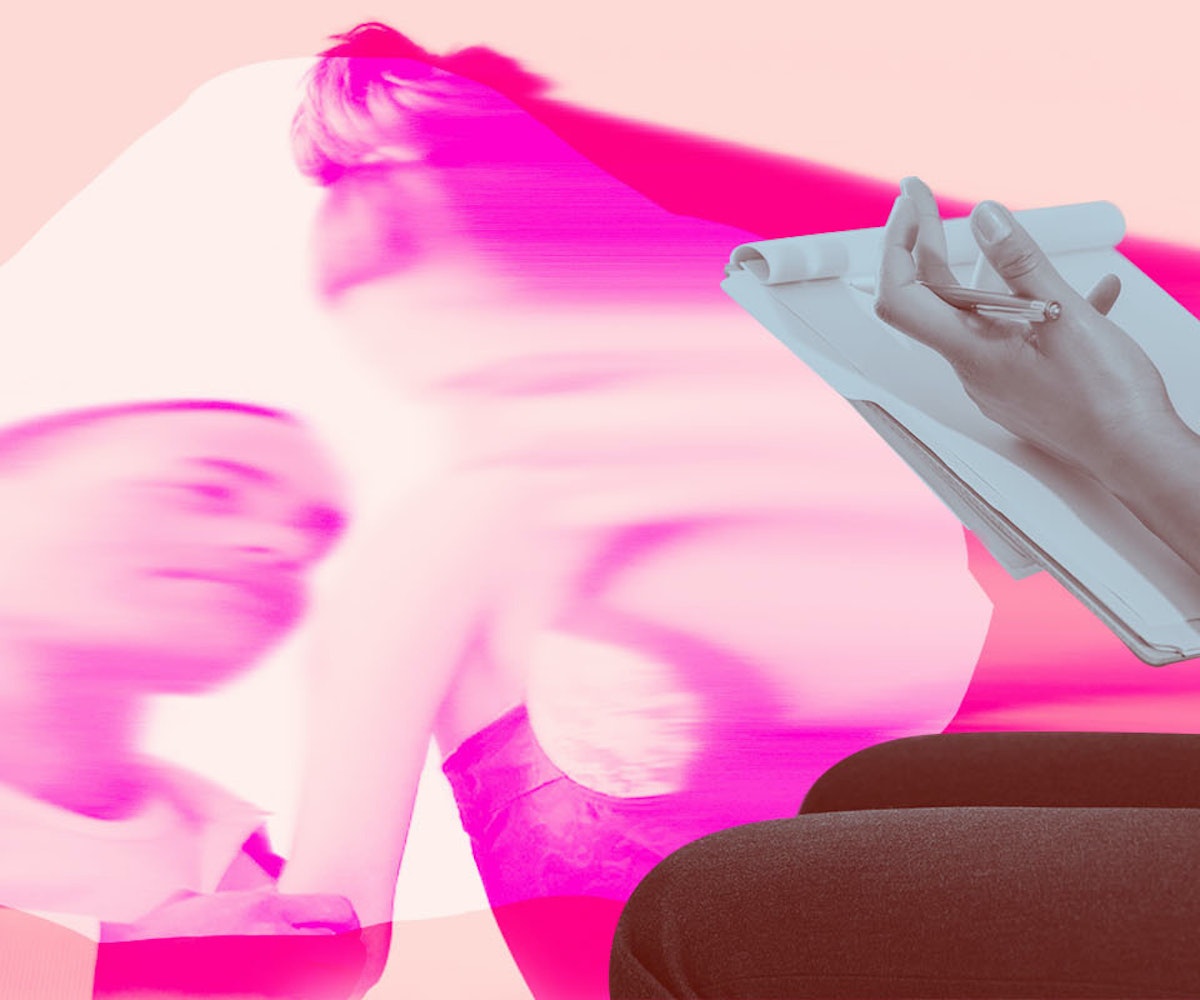 "Whatever you are comfortable with!" the director shouts haphazardly as you start the scene. I agreed to this, you think. There is some fumbling, you don't really know where you should put your hands, and your partner's thick, cream-cheese-and-lox-bagel-breath is distracting.

"Let's try this again but with a little more aggression and intensity!" the director shouts, adding: "Try grabbing her tits!"

You stop cold because that you did not agree to; you don't remember it being in the script, nor was it mentioned to you prior to this very moment. The scene starts again before you have time to say something. Your co-star starts grabs you roughly, and there is knot forming in the pit of your stomach as you try and focus on keeping your modesty garments in place and your breathing even. But this is just part of the job, right? Wrong.

One of the many responsibilities of an on-set intimacy coordinator is to ensure that unsettling situations and unwelcome surprises like this never happen. Despite the glamor we tend to project onto celebrities, a film or television set is a place of work like any other. Even ones like HBO's The Deuce, where sex and nudity are a constant—it is, after all, set in the sex industry of New York in the '70s. It is for that reason actress Emily Meade, who plays Lori Madison, asked HBO to hire someone who specializes in coordinating and choreographing intimate scenes.

Suddenly, a national conversation was sparked. Alicia Rodis, intimacy director and co-founder of Intimacy Directors International, was brought on to coordinate and choreograph and then HBO announced it would be mandating an intimacy coordinator on set for all its shows. This is great news—but it also might have you wondering what the day-to-day of an intimacy coordinator actually looks like.

The job that Rodis does is nuanced and highly specialized but simply put: She acts as an advocate for the actor, a consent enforcer, a choreographer, and the primary line of communication between the director and actor when it comes to all things intimate. She ensures that the story the director wants to tell and what the actor is comfortable with aligns while enforcing clear boundaries so that there are never any surprises. Her presence can only be described as a sigh of relief on set for the actors, but also the entire crew.

"When actors feel safe and know they are not going to be harassed or assaulted they do better work," says Rodis. "It is incredible that part of my job is to say that and that it is a revelation."

Nude and/or simulated sex scenes have been happening for decades, the difference is now we are paying attention to how they are being handled behind-the-scenes. There are countless stories of people getting drunk before filming simulated sex scenes in order to feel more comfortable or actually having sex to make it more authentic—even some situations where directors would have the entire crew strip down for filming, so the actors didn't feel alienated in their nudity. Protocols for how to responsibly choreograph and handle intimate scenes seemingly slipped through the cracks, and now Rodis and her colleagues at Intimacy Directors International are rewriting the rules with consent at the top of their minds.

The work of an intimacy coordinator starts in pre-production. The primary goal is to ensure that there is absolute clarity about what exactly is happening in any given intimate scene. Where are hands going? What's the expected level of nudity? What are the actor's boundaries? These are just some of the questions an intimacy coordinator will ask all involved parties before they step onto set.

"People forget that actors are humans," says Claire Warden, an intimacy director and coordinator who is making history for her work on Frankie and Johnny in the Clair de Lune, the very first Broadway play to use an intimacy coordinator. Whether in plays or on film sets, there are some persistent misconceptions about simulated sex scenes. "For the general public that aren't involved in the entertainment business or acting, it is lost just how vulnerable and demanding doing scenes of nudity or simulated sex are, especially in film, where the pressure is very high, it doesn't matter how many you've done," says Warden. These days on set can be trying, they can bring up trauma and they are not as "sexy" as the final product might paint them as.

Intimacy coordinators watch to make sure barriers are staying in place, they adjust choreography if something is not working or crossing boundaries, they make sure everyone's breath smells good and watch for any signs that the actor is in distress, especially when the story being told is a sensitive one.

"I found myself in positions where I kept having to come in and choreograph rape scenes, and it just struck me that we were handling these scenes the exact same way we would handle any other violent scene and not take any of the emotional care for either person in the scene into consideration," says Rodis. Intimacy Directors International was founded in 2015 by Rodis, Tonia Sina, and Siobhan Richardson and has since developed an extensive training program and an on-set protocol.

"For decades and decades and decades, actors have been horrifically abused and assaulted and disempowered, and we are trying to shift that," says Warden. Intimacy coordinators, most of whom are former actors themselves, are not just choreographers and movement specialists, they are mental health, first aid-certified, trauma-informed, and well-versed in sensitivity training and conflict resolution. Before they are able to go onto a set, they spend years doing observational work and apprenticeships to make sure they will be ready for any situation that may arise.

Before this specialized role, the responsibility fell on actors to try and figure out sex scenes on their own, or even on costume and makeup teams—who are often the last ones to see an actor before they get on camera or stage—to help coordinate sex scenes. "They have been the silent advocates on set for years, who have not gotten their compensation because that is not part of their job," says Rodis. "So many crew members have had to hold this emotional labor, feeling like they are being put in a position where they have to protect the actors even though they are not given the power to protect them."

The relationship between actor and director has inherent power dynamics. Even on a closed set (which means that only a few essential people are present) and with a supportive crew, when a seasoned director asks an actor to do something, saying "no" doesn't always feel like an option. "When we are talking about heightened situations like stunts, like nudity, and simulated sexuality, it is tough for consent not to be coerced when the asking is coming from such a place of power," says Rodis.

The famous improv saying "yes and" is something actors are taught at the beginning of their training. The ideal performer is malleable, easy to work with and up for anything. "So often we find 'yes' to be synonymous with good, and 'no' is synonymous with bad, there's this huge stigma attached to these words in a way that we feel bad or anxious or we feel sorry for having to say no," says Jessica Steinrock, an intimacy director, whose Ph.D. was centered around consent in improv, and whose coordination work you've seen on shows like Claws. "Reframing what yes and no actually means can be really powerful to incorporate in consent so [you] don't have to feel sorry for saying no anymore."

The reason intimacy coordinators are so effective is that they work to ensure that the director's vision is met and that the actors are comfortable and consenting every step of the way. Intimacy coordinators act as an unbiased third party who, unlike the actors, don't have a stake in the casting power structure. "I can be the one to jump under the bus so that way it never falls on the actor's shoulders and I can protect them from pushing themselves to places they don't need to go," says Steinrock.

Without someone on set to advocate, it goes beyond just uncomfortable—it is a workplace hazard and a labor issue. Historically, we have seen the patterns of how these inherent power dynamics have led to abuse and mistreatment, much of which has come to light in the past year as Hollywood grapples with its problematic history.

"I've been on sets before where the boom operator is holding up the boom and has tears in their eyes because the director is screaming 'go for it, go for it,' and they are watching someone be victimized," says Rodis. "We all have experiences in our lives where we didn't speak up, and it is just because it was deemed normal for us."

Times are changing. Talk of intimacy coordinators and accountability practices comes at a critical moment for Hollywood, with #MeToo and Time's Up gripping the national conversation. From Harvey Weinstein to James Toback to Bryan Singer, this work doesn't just feel timely—it feels urgent.

In every single investigation, these powerful men took advantage of their clout to convince young actors that intimacy, on and off the camera, was the industry standard and if they wanted to get anywhere in their careers they would partake.

"Our business is complicated because intimacy is part and parcel of our profession; as actors we are paid to do very intimate things in public," Lupita Nyong'o wrote in her New York Times op-ed about her experiences with Weinstein. "That's why someone can have the audacity to invite you to their home or hotel and you show up. Precisely because of this we must stay vigilant and ensure that the professional intimacy is not abused."

Not every set in Hollywood's history is filled with horror stories. There were plenty of directors and wardrobe teams who made sure their actors felt safe; the difference is with an intimacy coordinator those responsibilities don't have to fall on the crew, and everybody can fully invest in their own jobs without worrying.

In the future, intimacy directors could very well become a widely held industry standard the way that stunt coordinators and fight choreographers are (which means being solidified in unions and codes). It is no longer just indie films or student work that is requesting oversight, but huge networks who are following HBO's lead.

If you are at home binge-watching shows and wondering why this is a big deal, it is because this impacts you, too. When tuning in to catch the newest season of The Deuce or the last episode of Game of Thrones, you can breathe easy knowing that any sexual violence you see on screen was not at the expense of an actor's well-being.

We live in a world that is reckoning with its history of sexism and violence, so it is time to start supporting projects that are inclusive and non-exploitative—both on and off the screen. "Why would you want to feel complicit in someone's trauma, in their destruction or harm?" says Rodis. No one has the right to hurt others in pursuit of art. Historically, artists have had to endure a lot of mistreatment "in the name of the craft," and now with the help of intimacy coordinators, the next generation of actors won't have to.

NEXT UP
Culture
6 Shows To Binge Once You've Finished 'The White Lotus'
Culture
Phoebe Dynevor Will Not Return for Bridgerton Season 3
Culture
Succession Season 4 Trailer Explodes With Family Drama
Culture
The Madonna Biopic Is Being Scrapped
Style + Culture, delivered straight to your inbox.